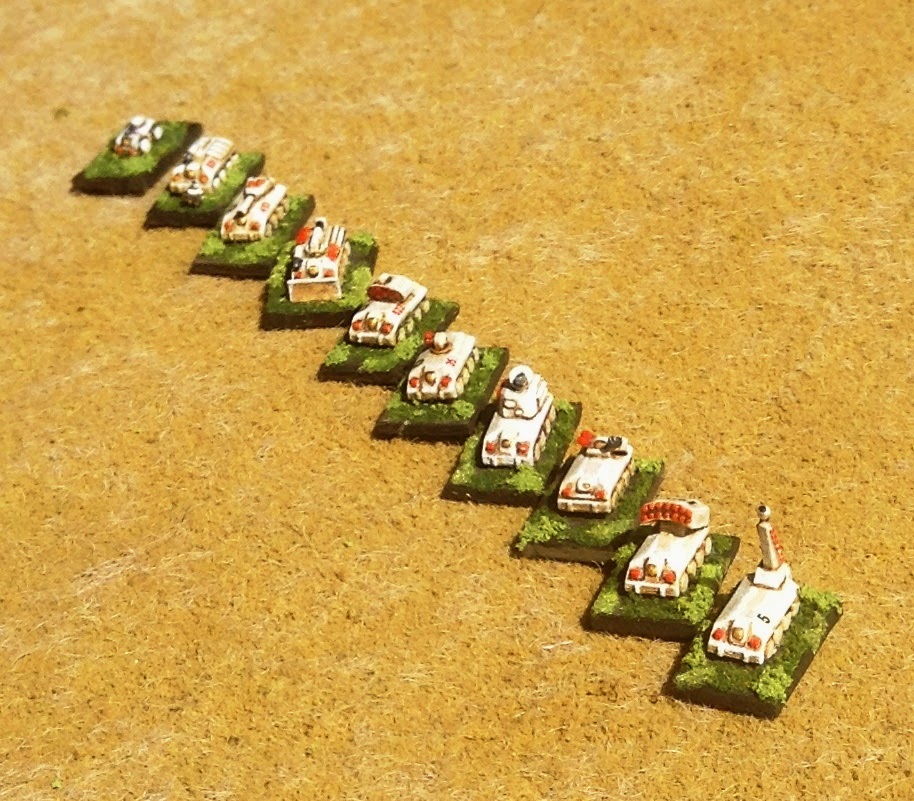 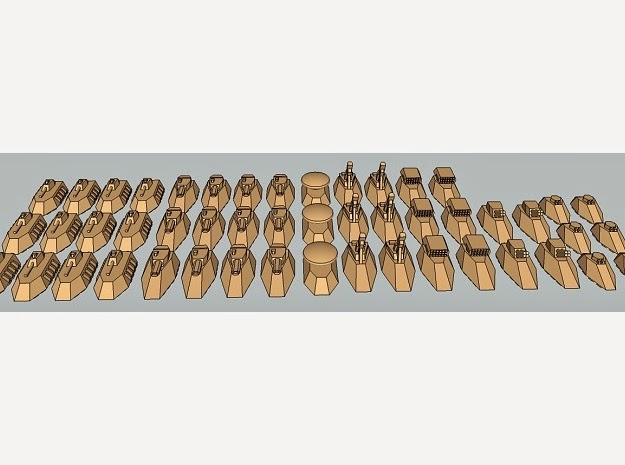 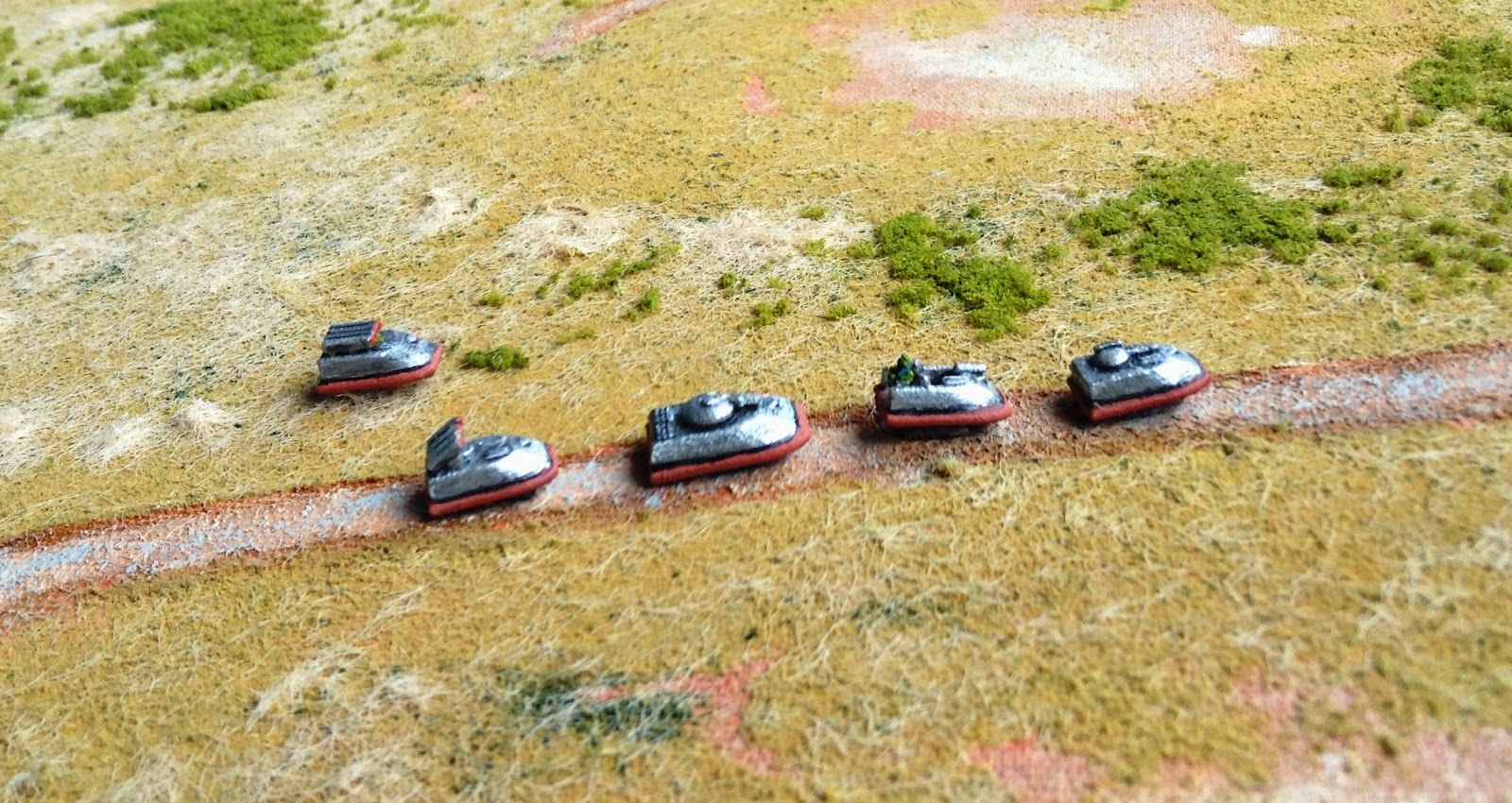 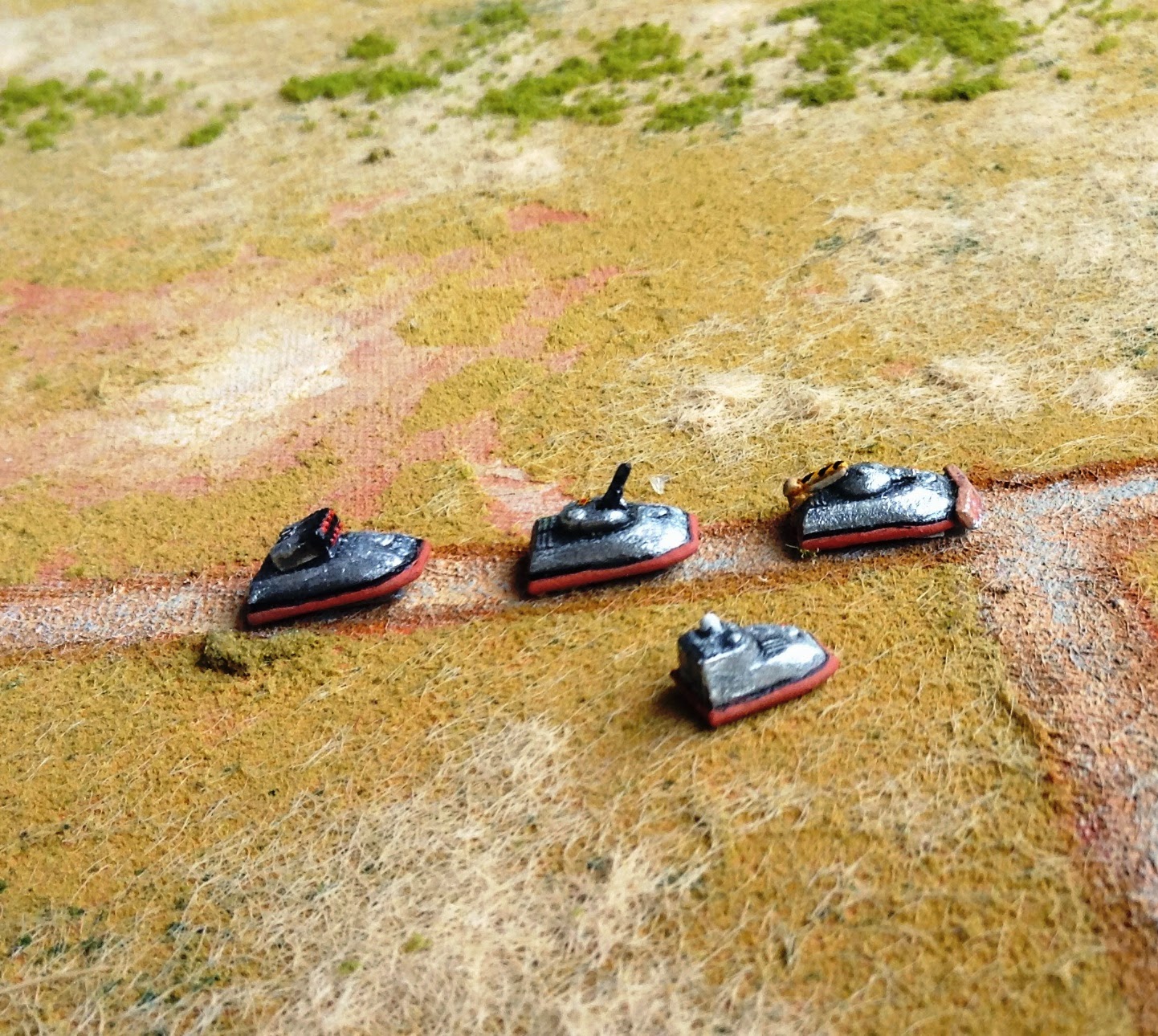 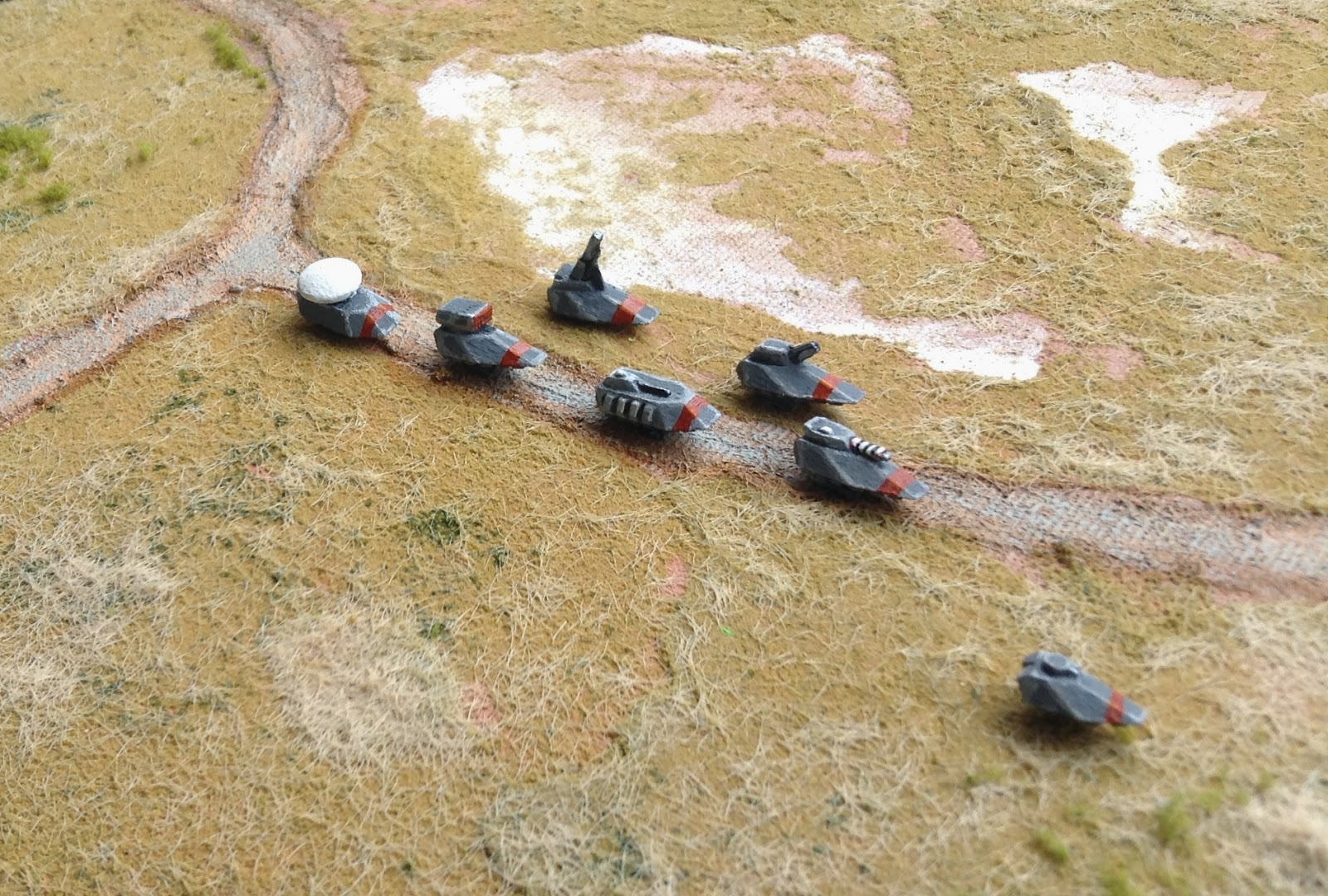 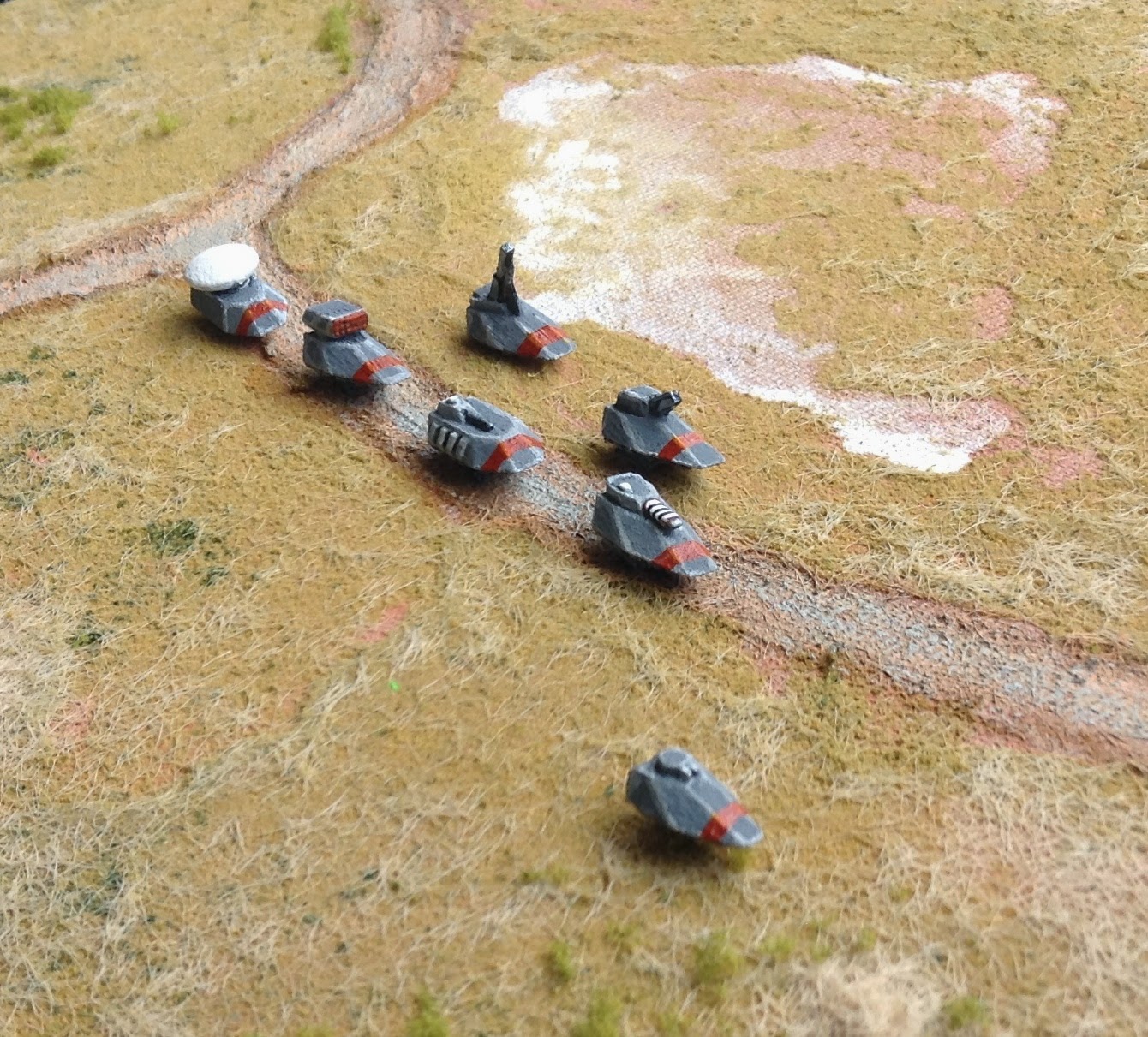 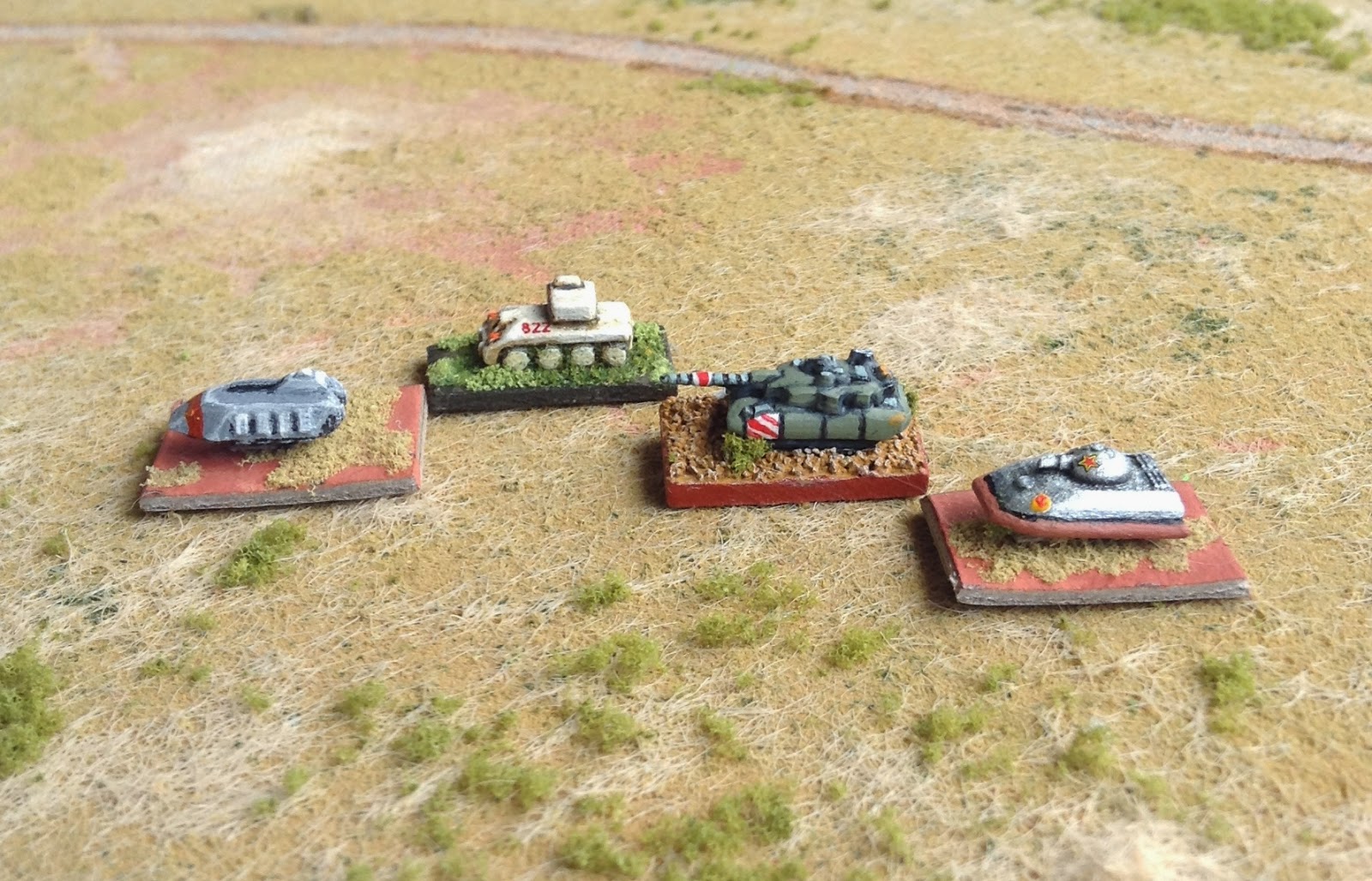 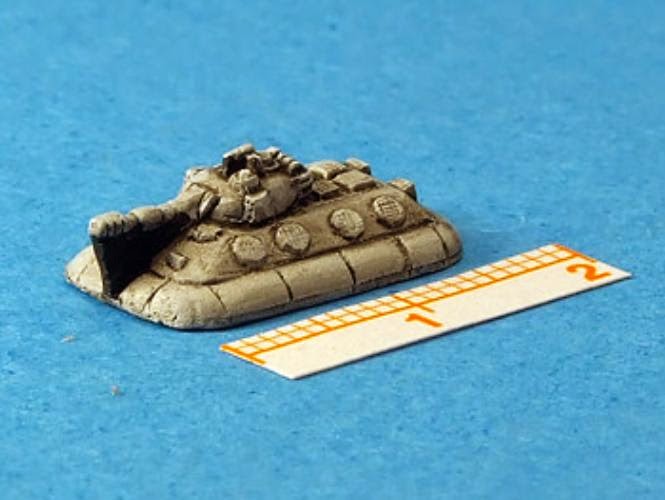 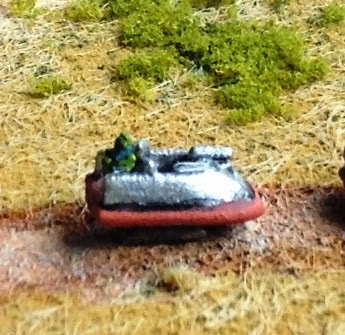 Posted by Thaddeus Gregory Blanchette at 7:06 AM No comments:


Just before the World Cup began in June, I received a nice little present in the mail from Andreas Udby, AKA “Javelin98”, the proprietor and head bottle-washer of the NationalCheese Emporium store on the Shapeways 3D printshop.

Andreas has been producing 1/900 and 1/600 (3mm) science fiction vehicles on Shapeways for several years now. He wanted me to take a closer look at his efforts and paint some of them up. I agreed, because I’ve been fascinated by Andreas’ work for a long time, but have never had the opportunity to see the models up close.

Well, real life got in the way, what with the Prostitution Observatory’s World Cup project and all. What little time I had to paint was dedicated to my 3mm Napoleonicsarmies. I recently finished most of those, however, so now I’m finally taking the time to paint up Andreas’ creations. This is the first installment of a series of reviews of the National Cheese Emporium’s sci-fi lines.

The first thing to note is that Andreas has been producing since shortly after Shapeways went on line. His initial offering were thus quite crude in comparison to the little gems he’s now producing. He sent me a complete selection of his work, however, so we get to see everything: the good, the bad and the ugly.

I decided to start off with what I considered to be a middle-of-the-road offering: the vehicles that make up the Wheeled Combat Team. All of the NCE’s offerings come in ready-made unit mixes. This is good and bad: good, because if you like their mix, you need only buy one pack and Bob’s yer uncle. Bad, because if you want a specific unit type, you can’t buy it separately. So if I wanted, say, 12 extra scout vehicles (and I do), I need to buy two of the full 59 vehicle Combat Teams. When combined with Shapeway’s spiraling prices, this can be a problem.

Another problem is that, obviously, all of these figs are plastic. Andreas sent me a selection of different plastics and, I must say, the “white flexible material” – which is Shapeway’s default printing medium, makes vehicles this size look like bits of chewed bubblegum. Most of what I received, however, is in “white detail” or “frosted ultra-detail” printing medium, and this is perfectly fine material for these models. Unfortunately, again, these mediums spike the cost of the figures. 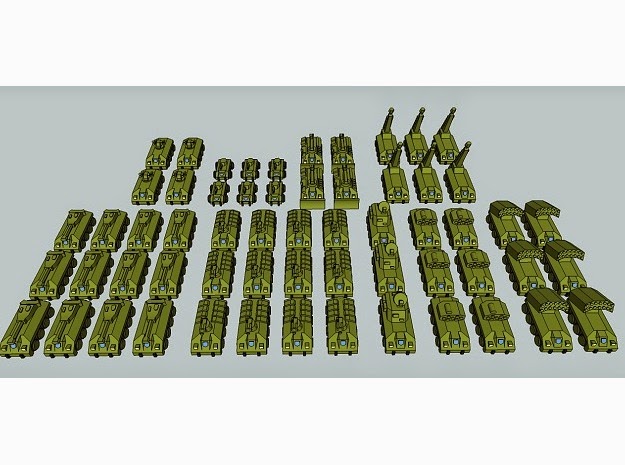 I was initially not very impressed with the Wheeled Combat Team models but, as I painted them up, I grew to love them. These are some quite spiffy little figures! There are nine different models in the pack, allowing you to form an armored infantry and light armored company, backed up by MRL and artillery batteries, anti-tank missile carriers, scouts, AAA and engineers. For some reason, I received TEN different models, the excess one being a variant anti-aircraft vehicle. The correct AAA vehicle, which I also received, came to me with one of its missile pods snapped off and missing. This highlights another danger with Shapeway's materials: they are more fragile than metal. They stand up well to regular use, but longer, thinner pieces (like gun barrels) can snap off. At this scale, however,  that’s pretty much par for the course for any casting material.

Anyhow, the figs are clean and well-detailed, though not as detailed as Oddzial Army’sscience fiction vehicles. This is actually a good thing, as it gives the models cleaner and more “futuristic” lines.

The best of the lot, to my mind, is the wheeled APC. You receive twelve of these in the pack and I wish I could get more of them! This is quite an attractive vehicle, which scales perfectly with O8’s offerings. The scout car seems a tad small, but is quite cute and it's not noticeably out of place when set next to the other vehicles. The mobile artillery carrier is also very attractive.

The light tank suffers a tad from having too low a turret, which is a problem with several of the NCE’s figures, to my mind. The gun is right on top of the bottom hull and it just looks strange if you really peer at it for awhile. It’s still a fine model, however, and is quite nice when set with the other figs on the table.

I’m not a big fan of the engineering and command vehicles, but these vehicles tend to be ugly in real life, so it’s hard to see how they could be prettied up here. The missile carriers are fine, but I prefer the alternative AAA vehicle to the one that normally comes with the pack.

Here you can see the figures. Unfortunately, my camera isn’t the best. They are much nicer in real life! 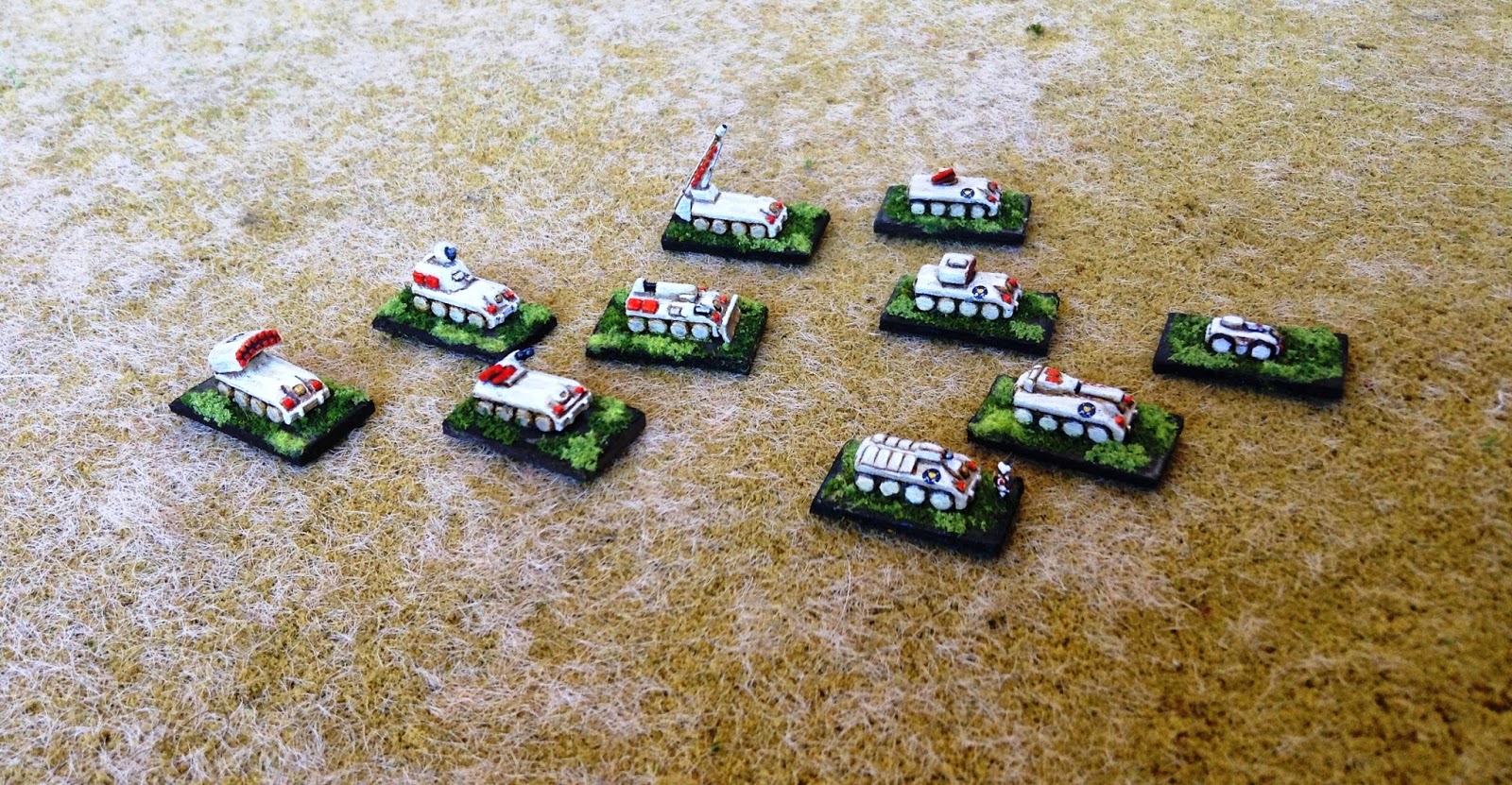 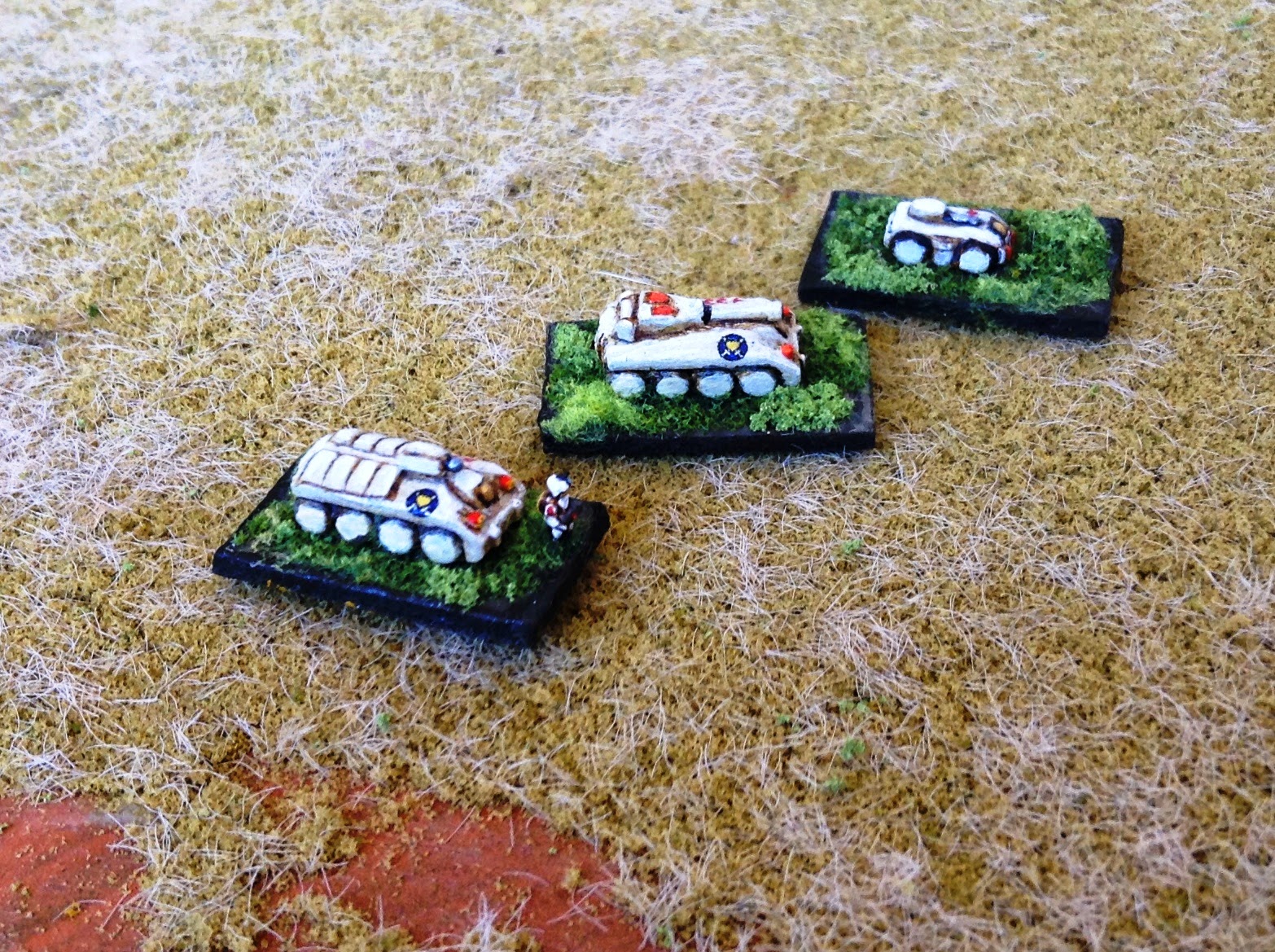 The APC, Light Tank and Scout Car. An O8 "heavy infantry" model from that company's SF line is in front of the APC. Note that the heavy infantry is 4mm tall - noticebly brawnier and more armored than the company's 3mm regular infantry. Warsaw Pact or NATO infantry scale perfectly with these models. 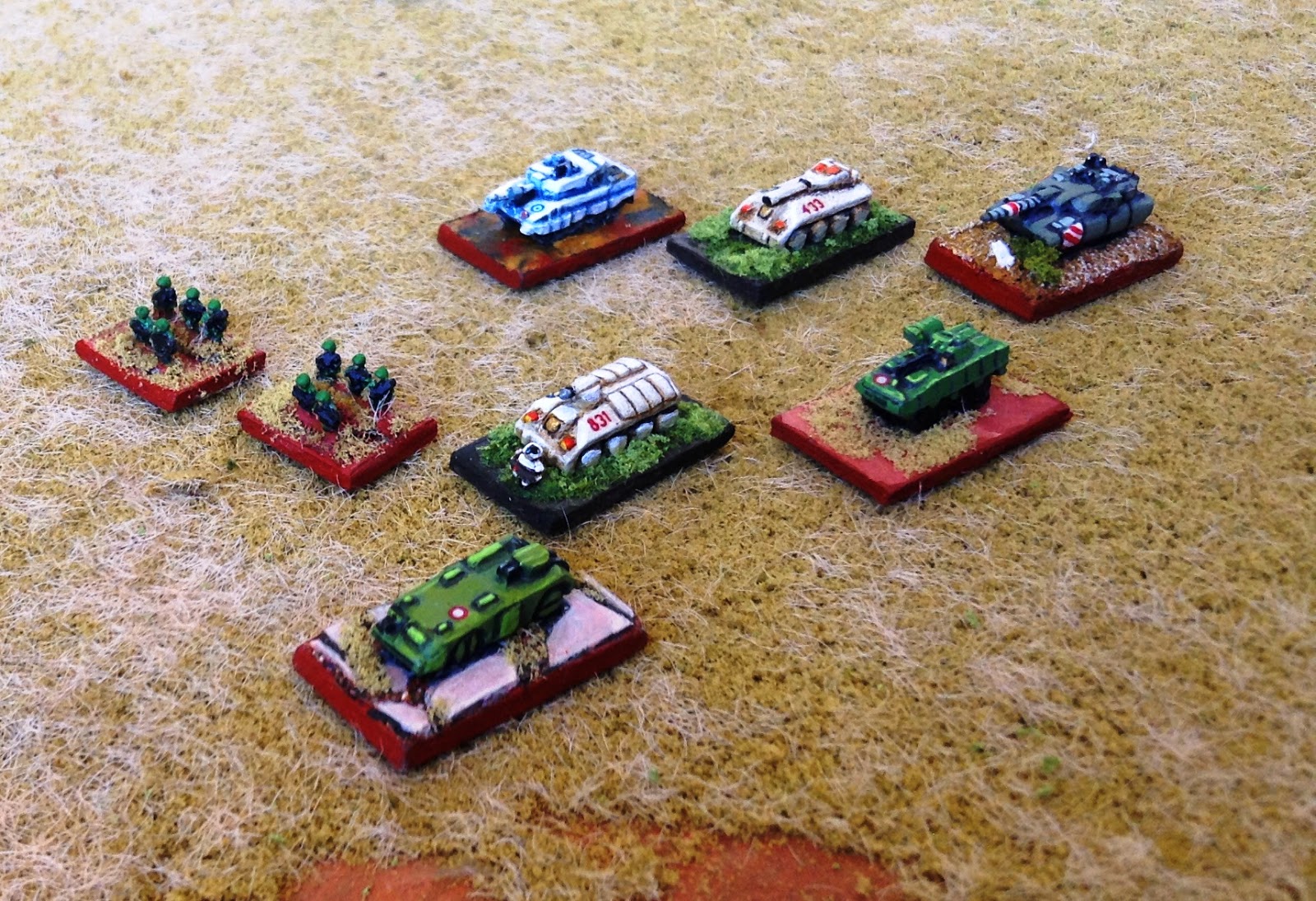 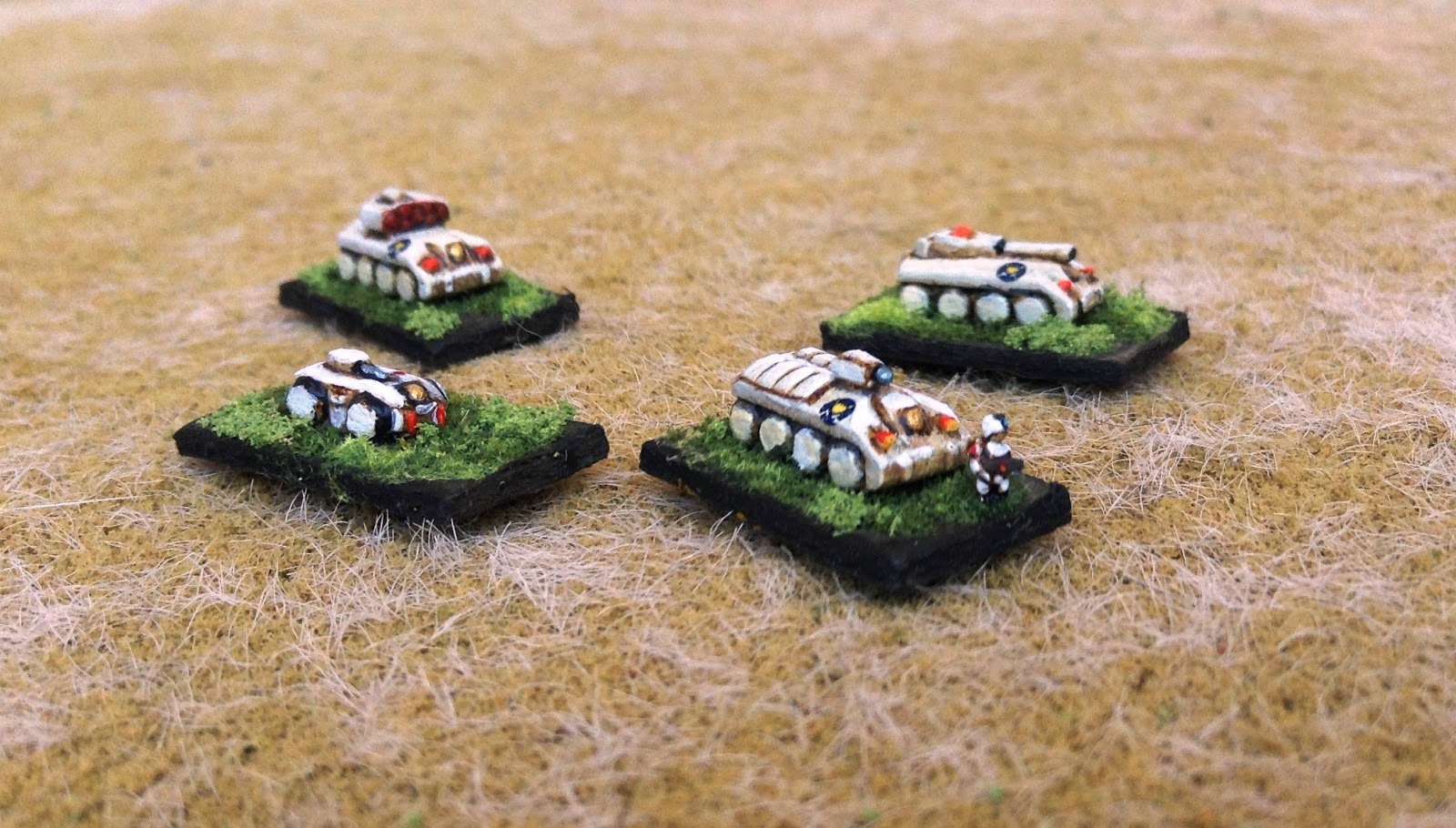 Close ups of the AT Missile Carrier, the APC, the Light Tank and the Scout Car.

Bottom line: at 45 USD for 59 models, this pack costs you two and a half times what a similar number of vehicles from O8 would cost. Still, these are quite nice! Also nice is the fact that you get nine separate types of models. When you take that into account, the difference between NCE and O8 isn’t quite as extreme as (depending on packaging) a similar selection of O8 models would cost around 30-36 USD.  The big problem here is that you’re locked into NCE’s unit selection. Want another company of APCs to go with the one you get in the Combat Team? Tough luck: you need to spend another 45 bucks and buy everything once again.

That said, I think I’m going to get a Wheeled Combat Team for myself, ASAP. The figs are just too nice and there really is not much like them on the market, as yet!
So, my grade for the Wheeled Combat Team: B+. Getting these figs available in separate model packs would up that to A-, however. You can buy these with a clear conscience, knowing they’ll fit in well with everything you have! 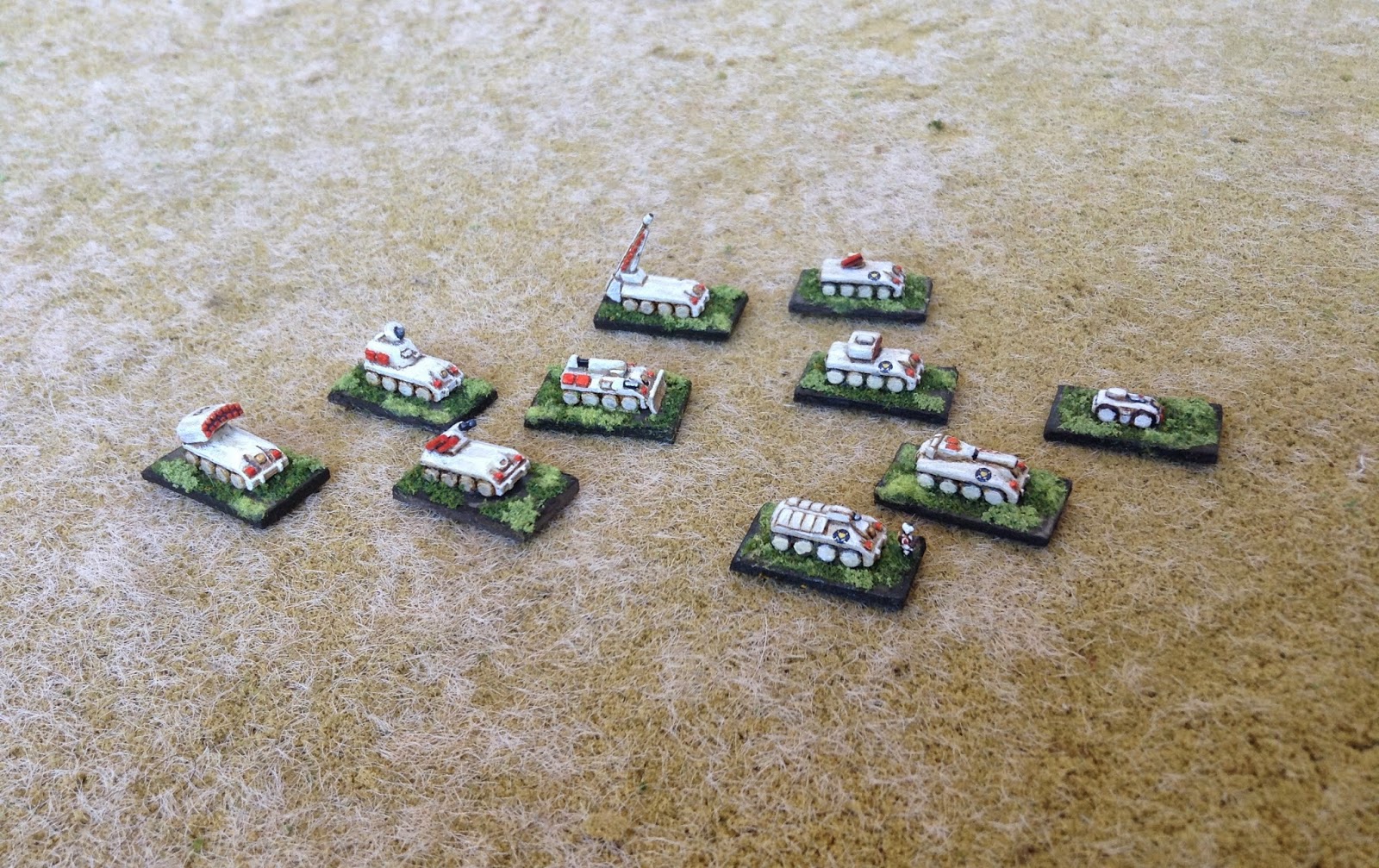 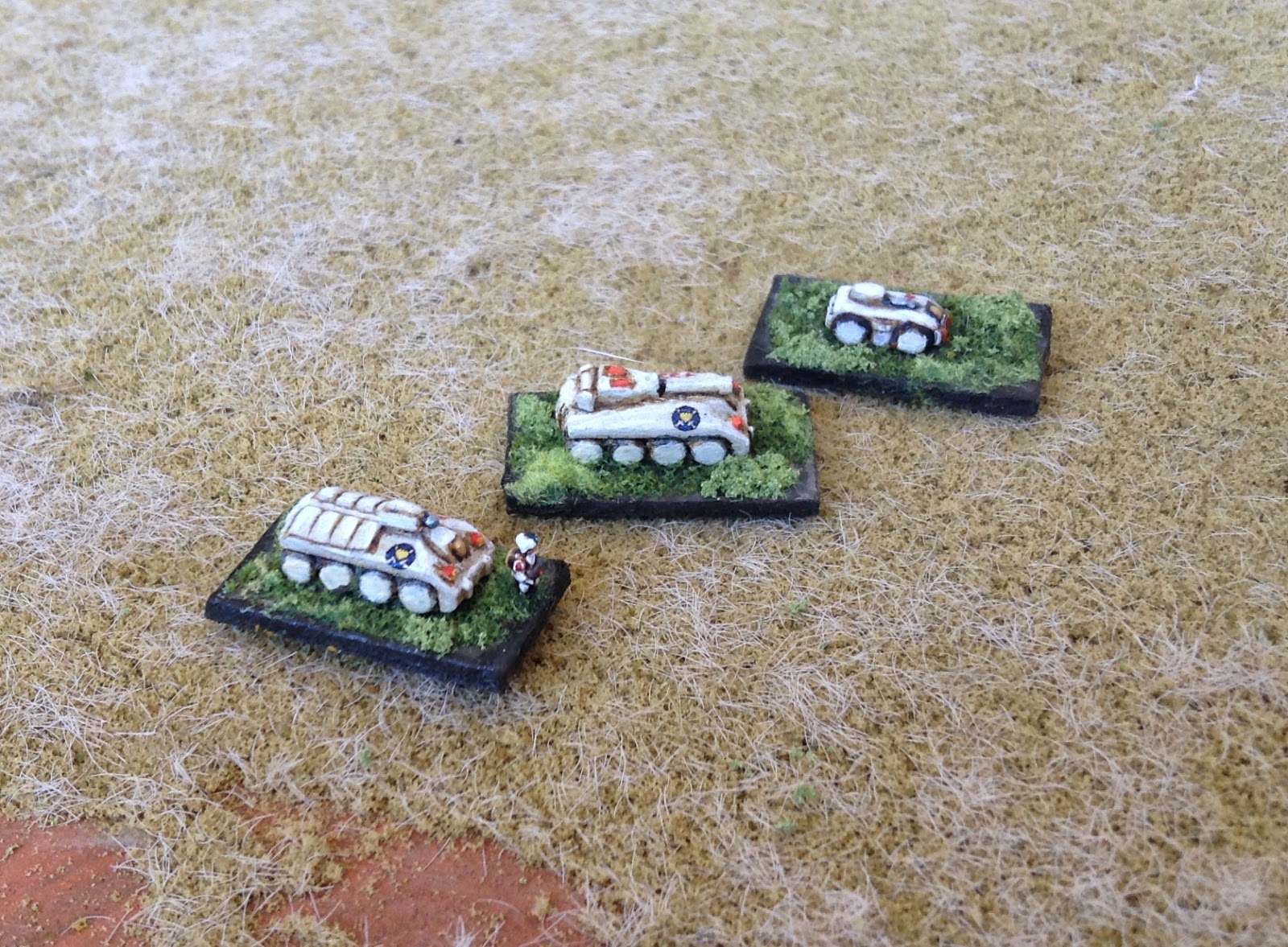 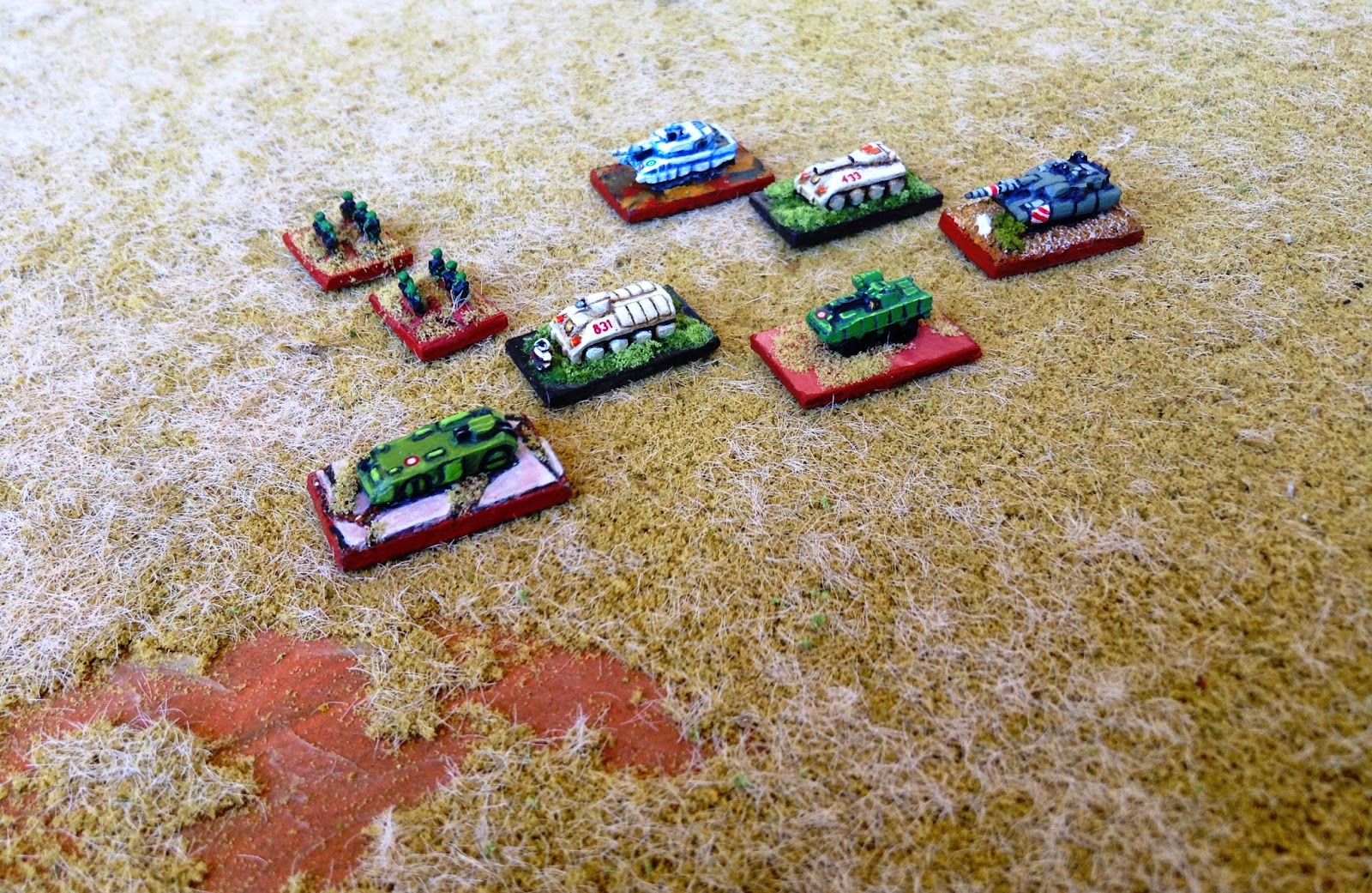 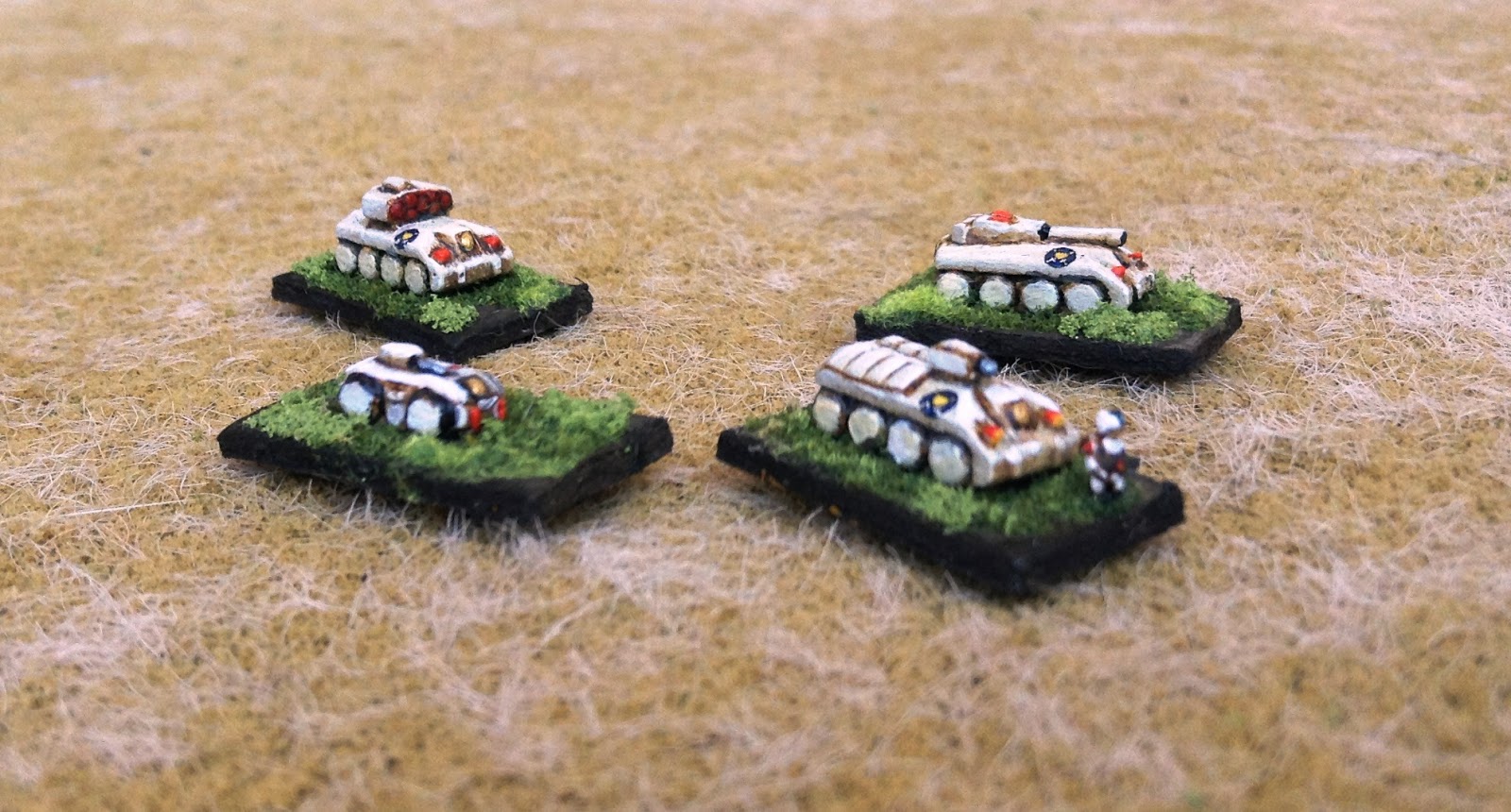 Posted by Thaddeus Gregory Blanchette at 11:19 AM No comments: