While up in Puerto Rico for the 2014 National Women's Studies Conference, I picked up some of O8's new sci-fi figs (tip o' the hat to Gregory Mitchell for bringing them down to the conference!).

My goal here is to paint "black" and "white" armies for Ogre Miniatures - as close to the old classic game and paint schemes as I can come - yet still be able to use these figs, at a pinch, in other sci-fi settings (most particularly my on-going Smade's World campaign). The "Combine" figures are thus white with red trimmings while the "Paneuropeans" are my standard blue-grey. I gave the Combine Polish Roundels and the Paneuros Belgian roundels. Hopefully, I will be able to switch these out with home-made decals at some point in the future.

O8 now has some smashing stuff that can easily stand in for Ogre figures. Having bought a bunch of it, I've now set about kit-bashing to make everything as close to Ogre as possible.

So here's the new O8 Centaurus hovercraft, kit-bashed to look like a GEV... 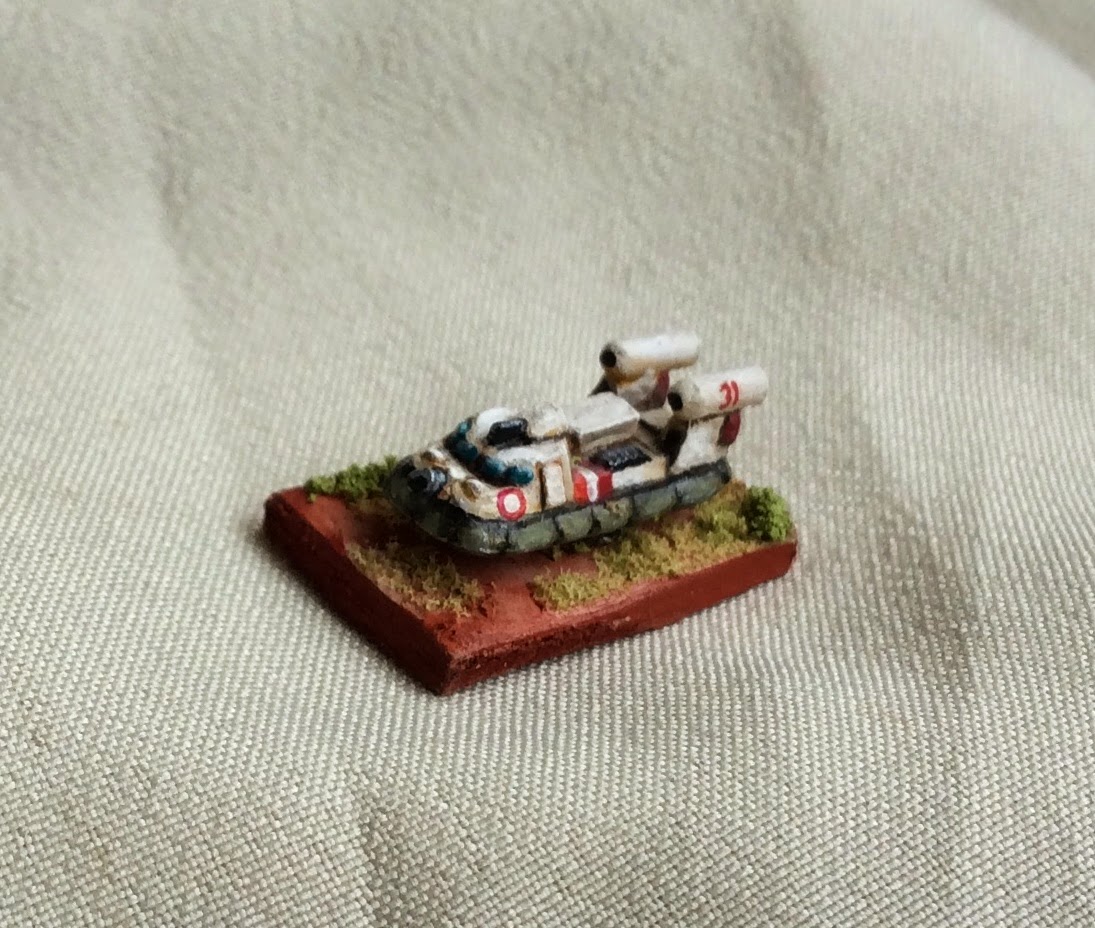 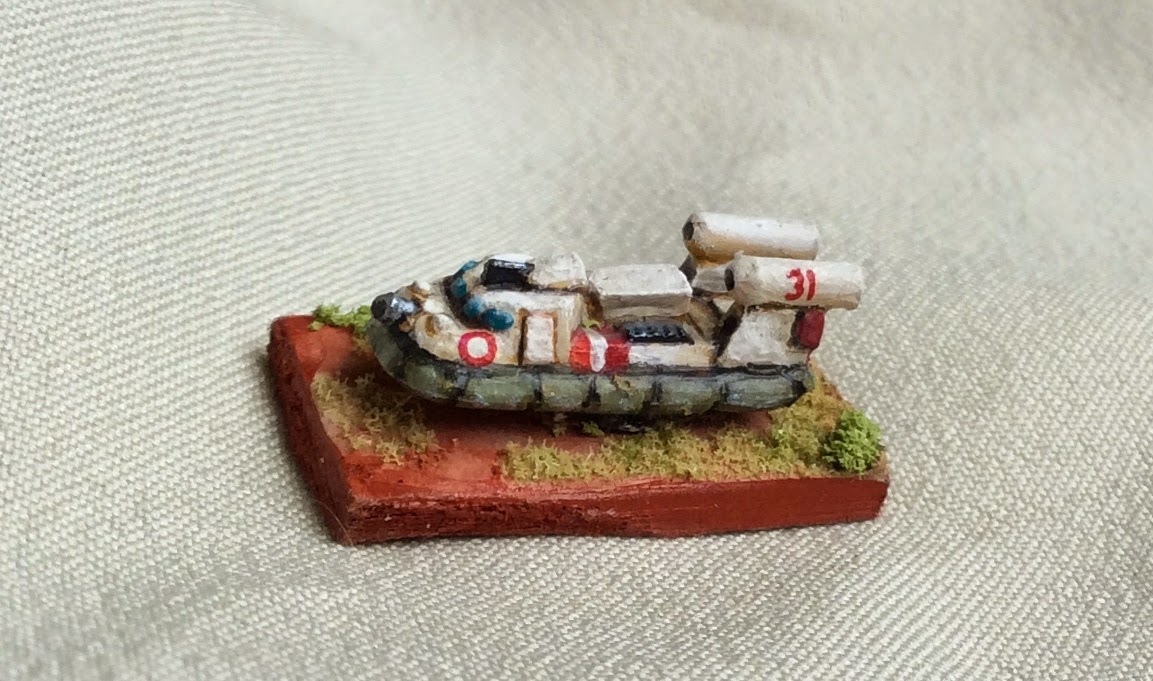 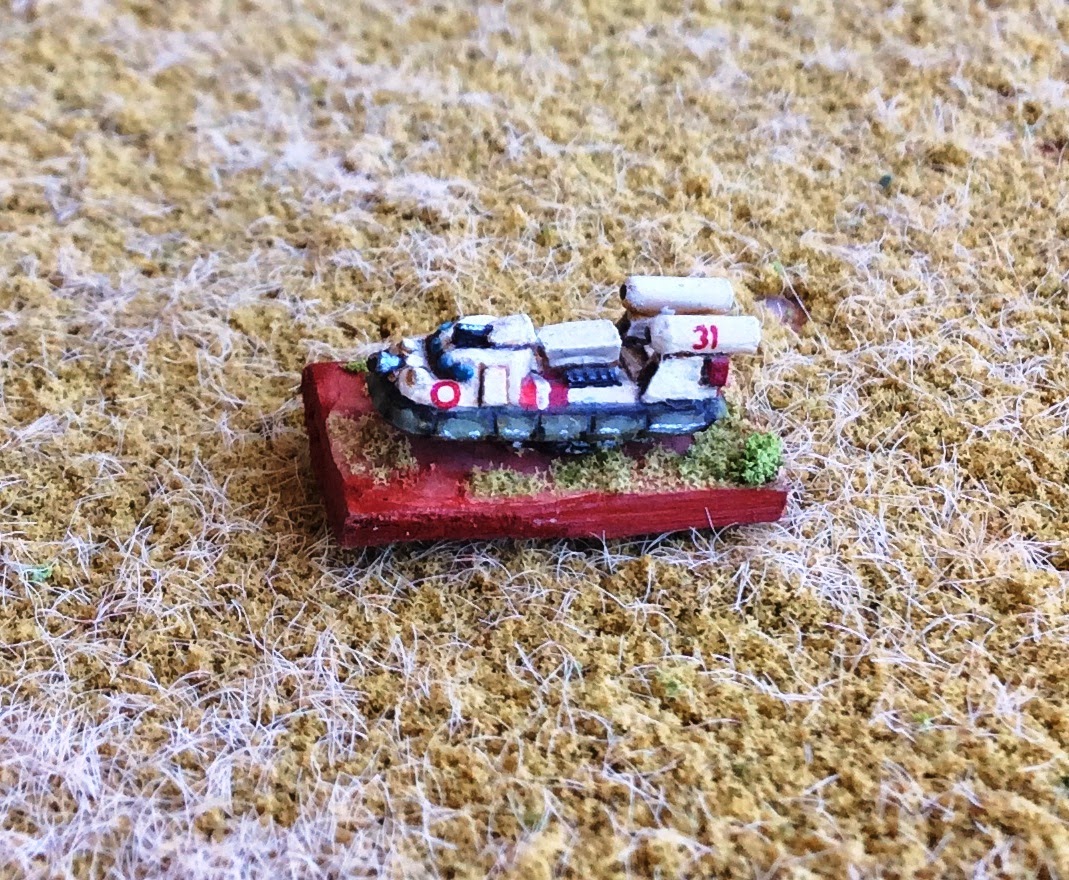 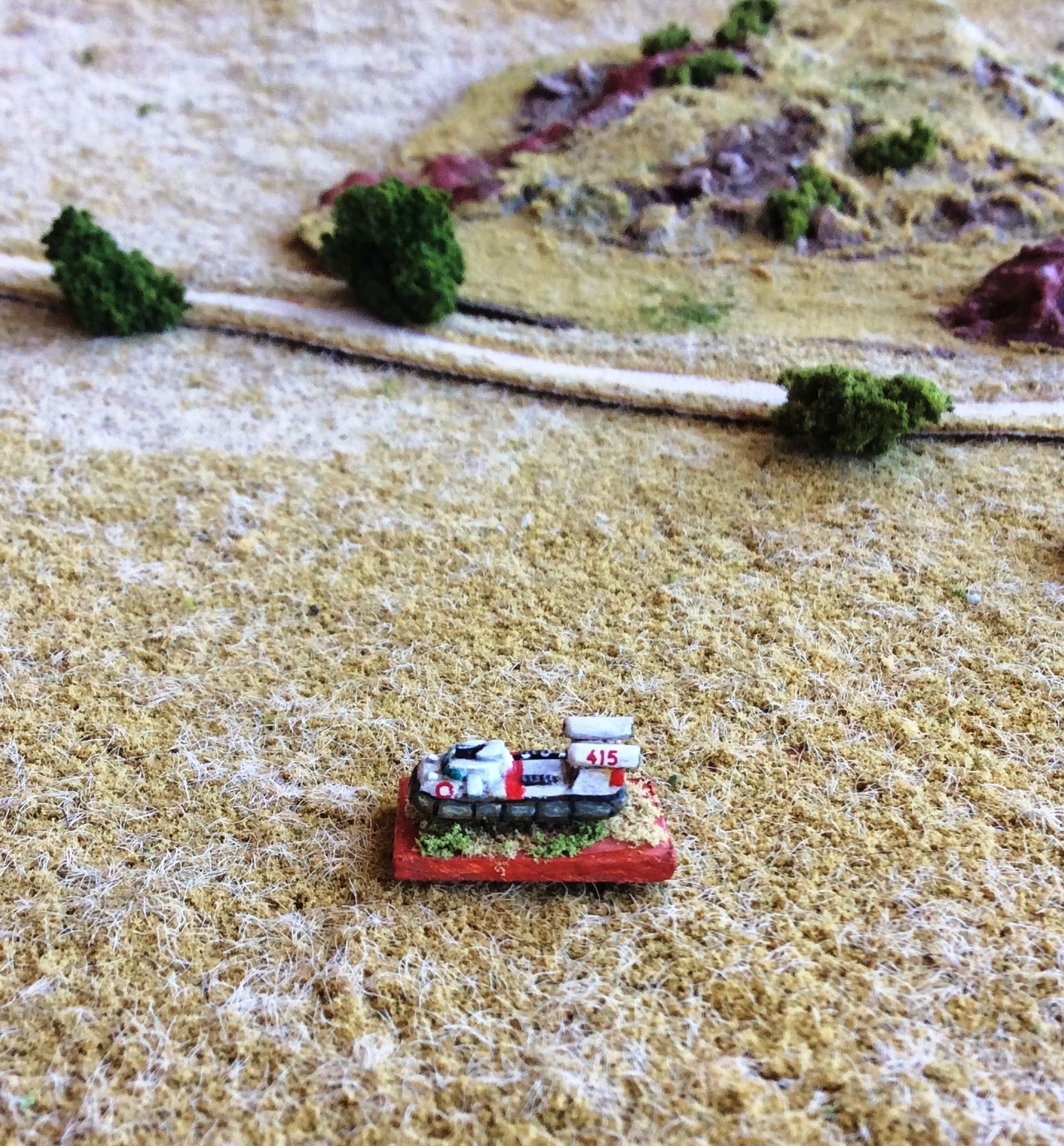 The casting is a little too long and lightly-armed to be a straight-up Ogre GEV (although it's damned near perfect for the GEV-PC). I bulked it up a bit by adding a cabin extension made out of a chunk of plastic beam. I also gave it a nubbin of paperclip as a bow gun and two snips of plastic dowel for its jet engines. It now looks pretty spot-on, IMHO.

The GEV-PC version has no gun or cabin extension, but a boar-brustle hold bar was mounted running from the cockpit to the back fan and the back fan was raised a bit via a square of plasticard.

The two are now easily identifiable at arm's length.

This is a tank and it's a bit of a heartbreaker for me. As is, it looks just like a Combine Heavy Tank. Almost perfect in that respect except that it's one of the smaller tanks made by O8. The GEV and MSL dwarf it! This is a pity, because I think it's lovely as a Heavy. 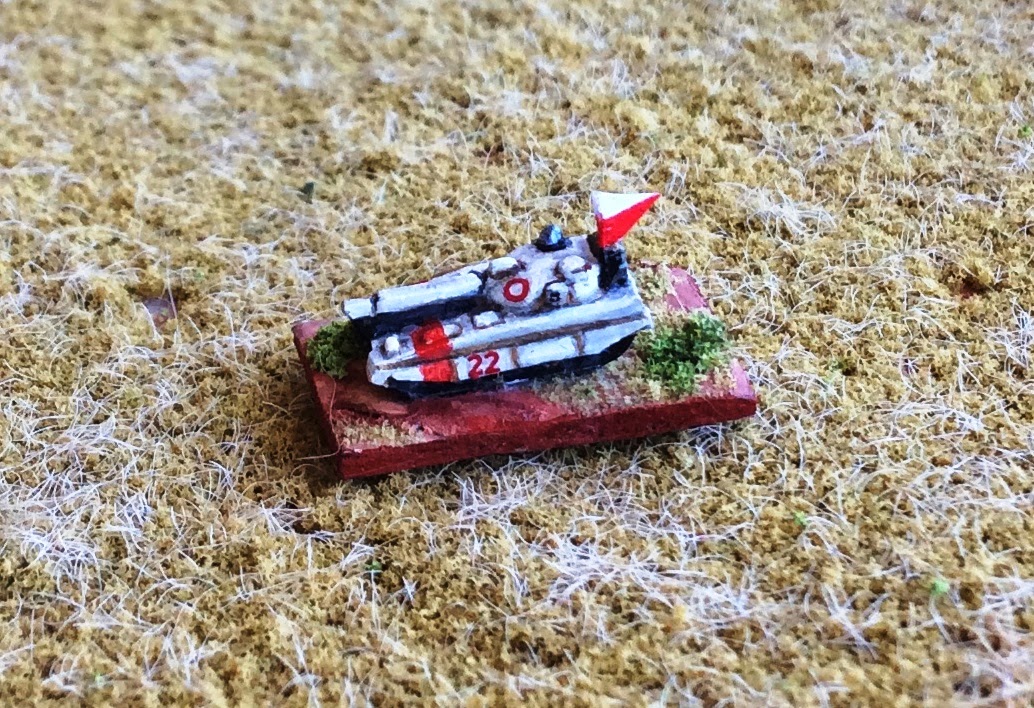 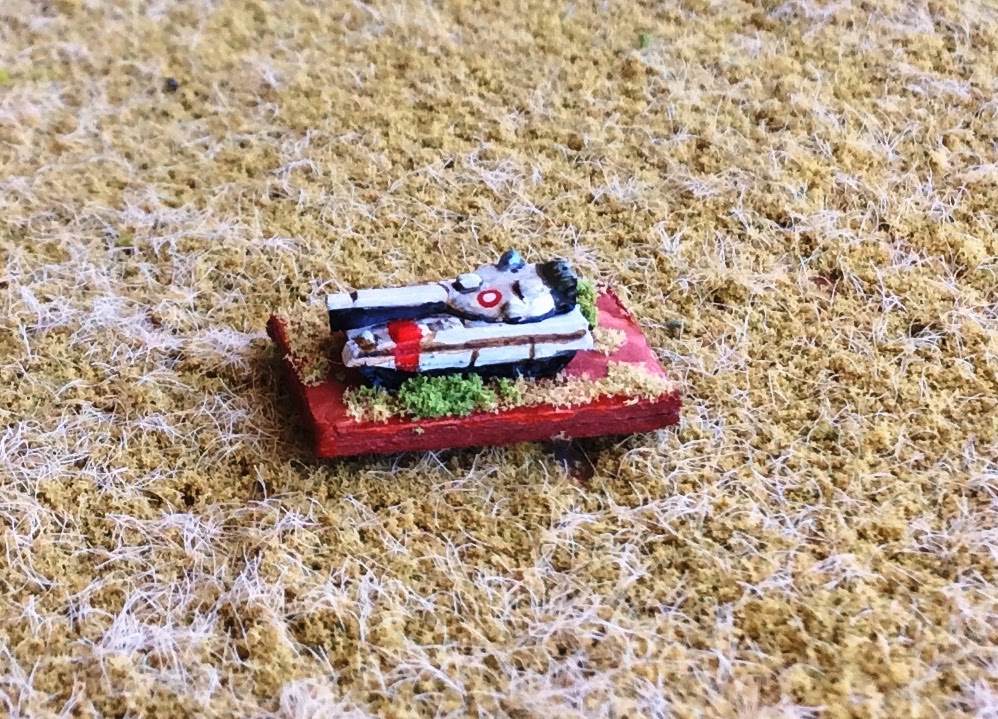 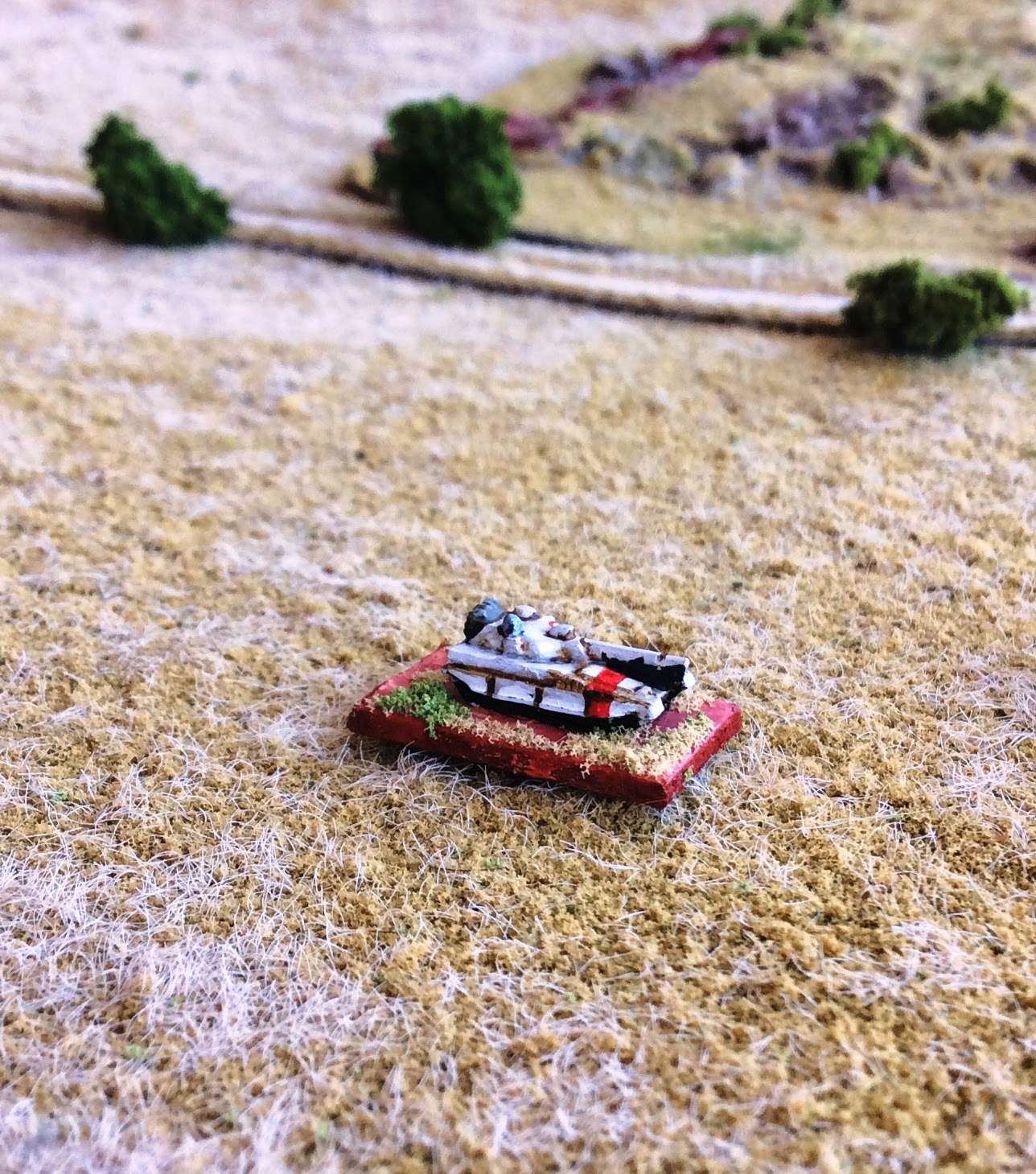 Maybe someday O8 will do the other Aliens tank from The Colonial Marine Technical Manual. It has the same general design, but is much more high-tech and, presumably, larger. If they do that, then said vehicle will become my Heavy.  Until then, the Caesarion will have to do, as it's about half again the size of this baby. This vehicle will be relegated to being a Light Tank (I don't like the original Ogre designs for these, anyhow). It's still very nice looking!

Here're the Mobile Howitzer and the Howitzer. The MHWZR is a straigh-up O8 casting. It comes with an alternative barrel, however. I used those and a bit of plasticard, a thumbtack and a bead to scratch-build the HWZR, which I think looks quite nice. 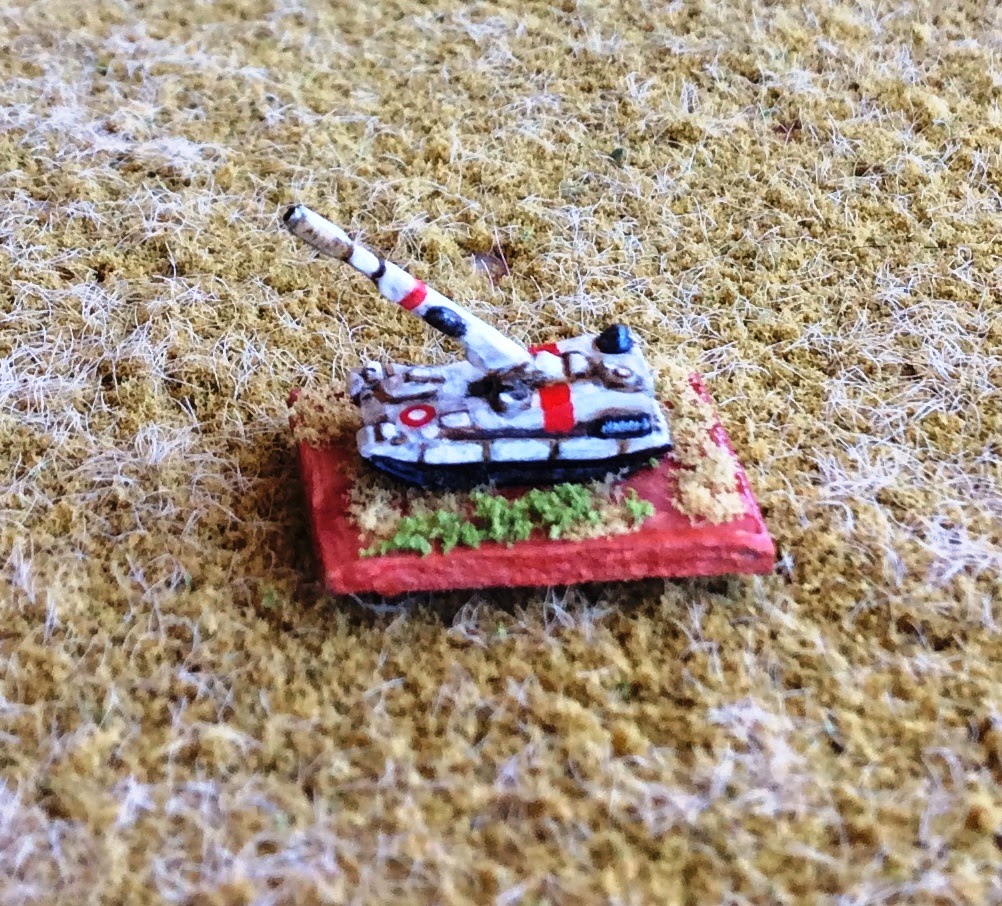 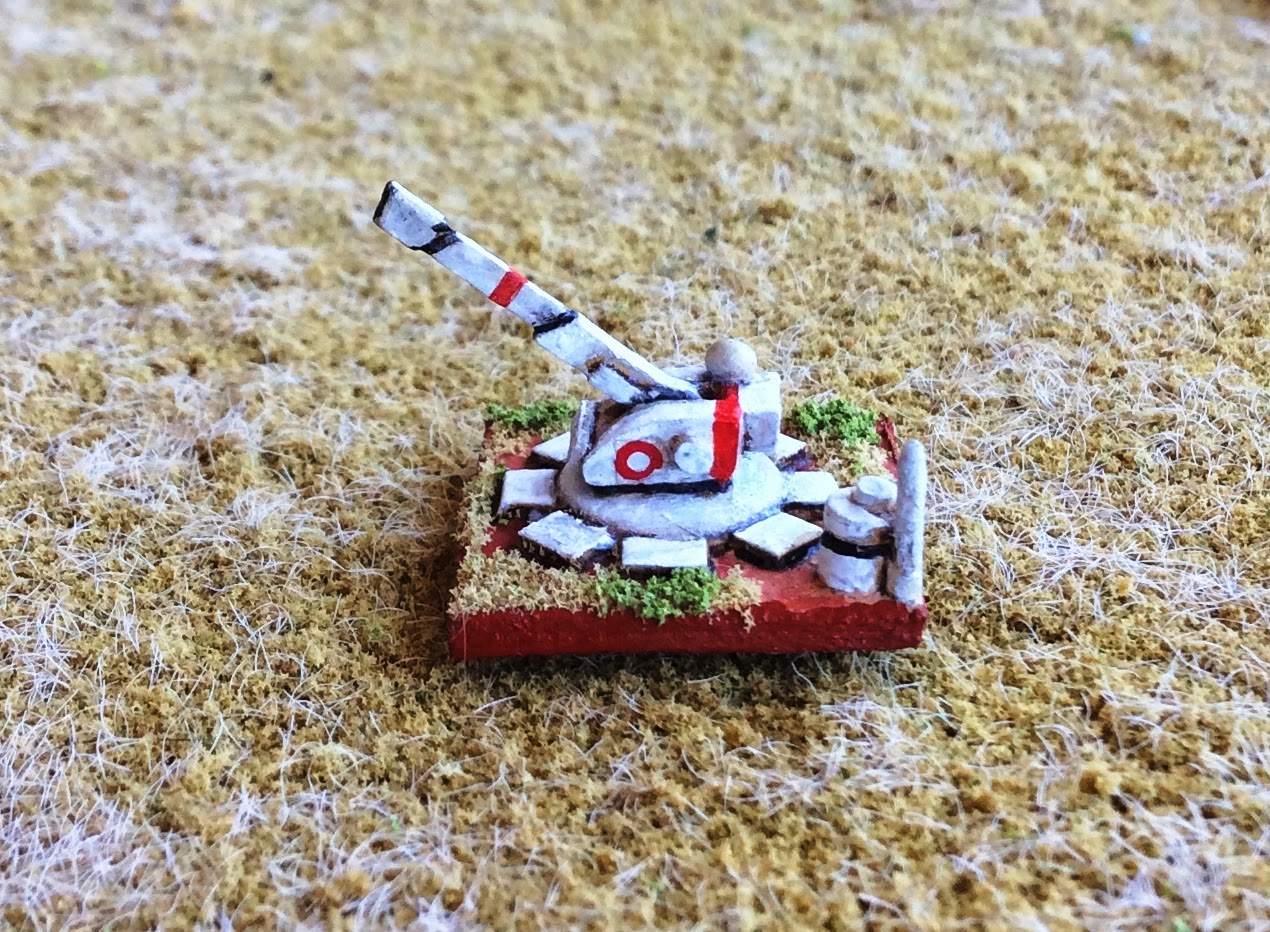 Here is my newest Mark III Ogre build. Its chassis is a Marhaf Legion Phrestorm support tanke from Plasmablast Games. Its superstructure is built from pins and plasticard: 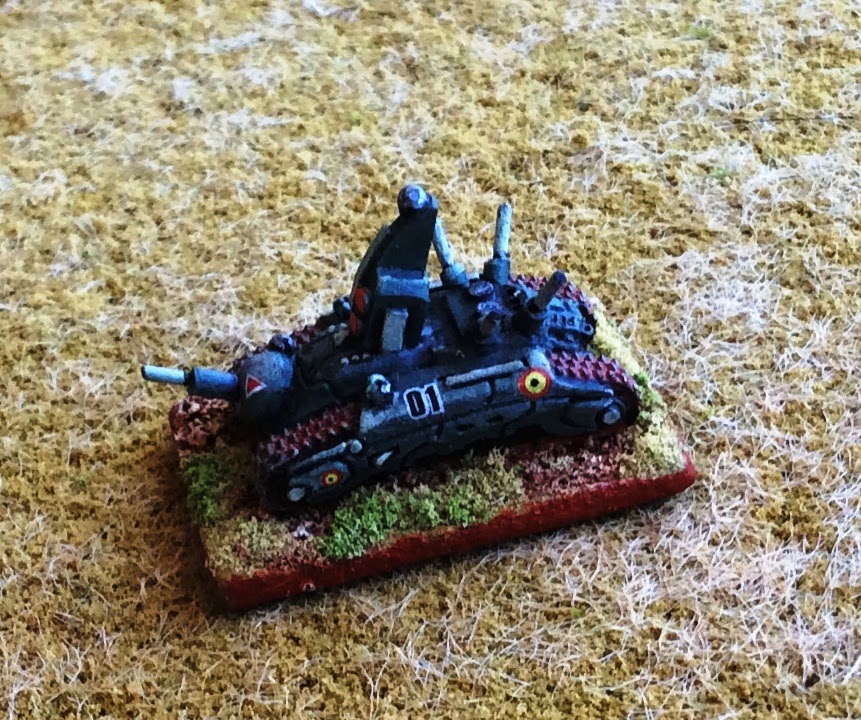 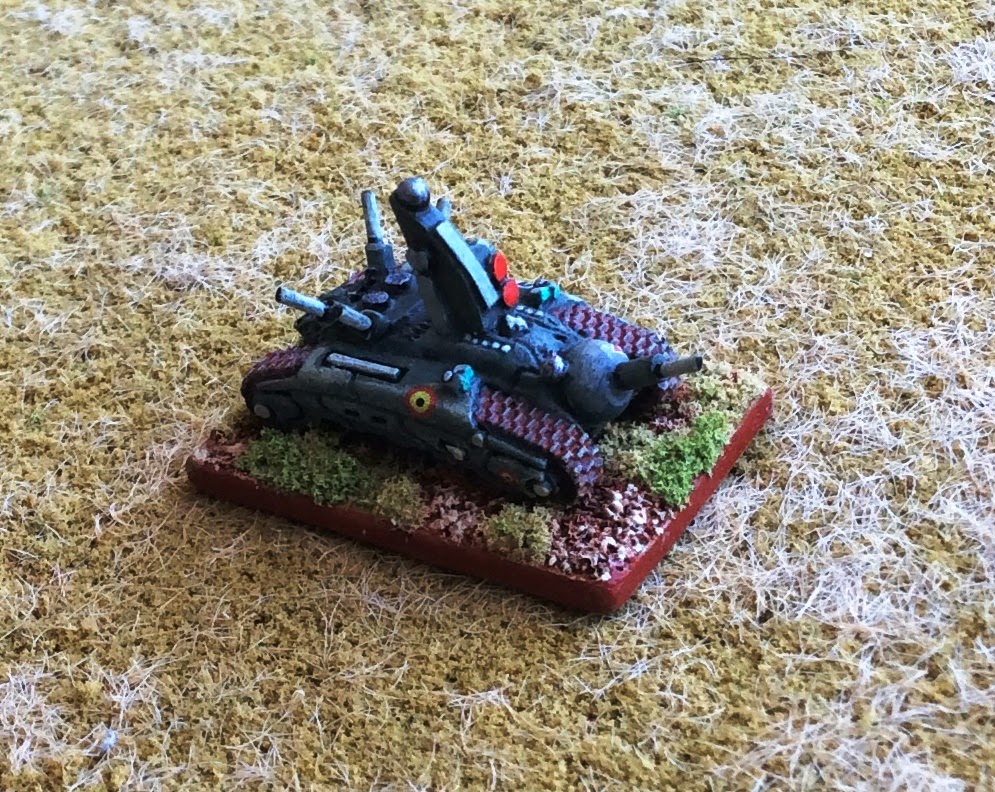 Last but not least, the infantry. I am basing these as four castings on a 12mm x 12mm stand and two castings on a 6x12mm stand. This makes for a "platoon" of six castings on a 20 x 12mm base, with "change" being able to be easily made. I will also base some 10 platoons, per army, on full bases, just to make life easier in smaller scenarios. 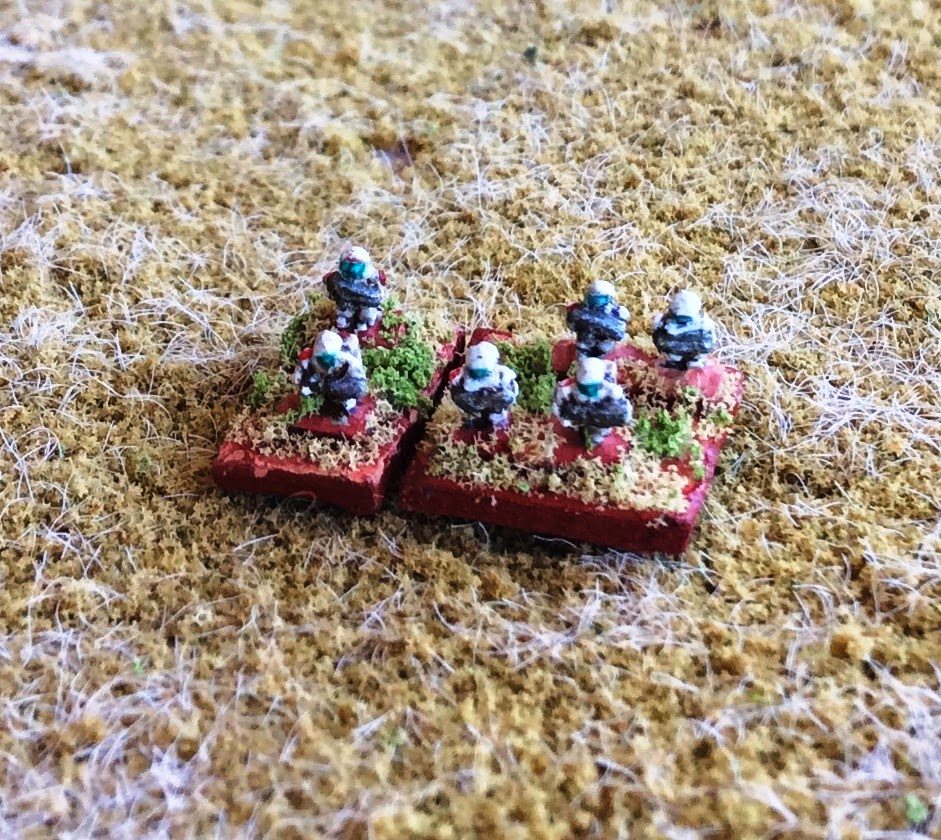 And finally, here are some group and comparison shots. You can see the Missile Tank and GEV-PC in these. The Ogre is a tad small, but not too bad: canon Mark IIIs are 58 feet long and mine is slightly over 50. People are accustomed to thinking of Ogres as amazingly huge, but the Mark III is only really about twice as long as an Abrams M1. "Only"... 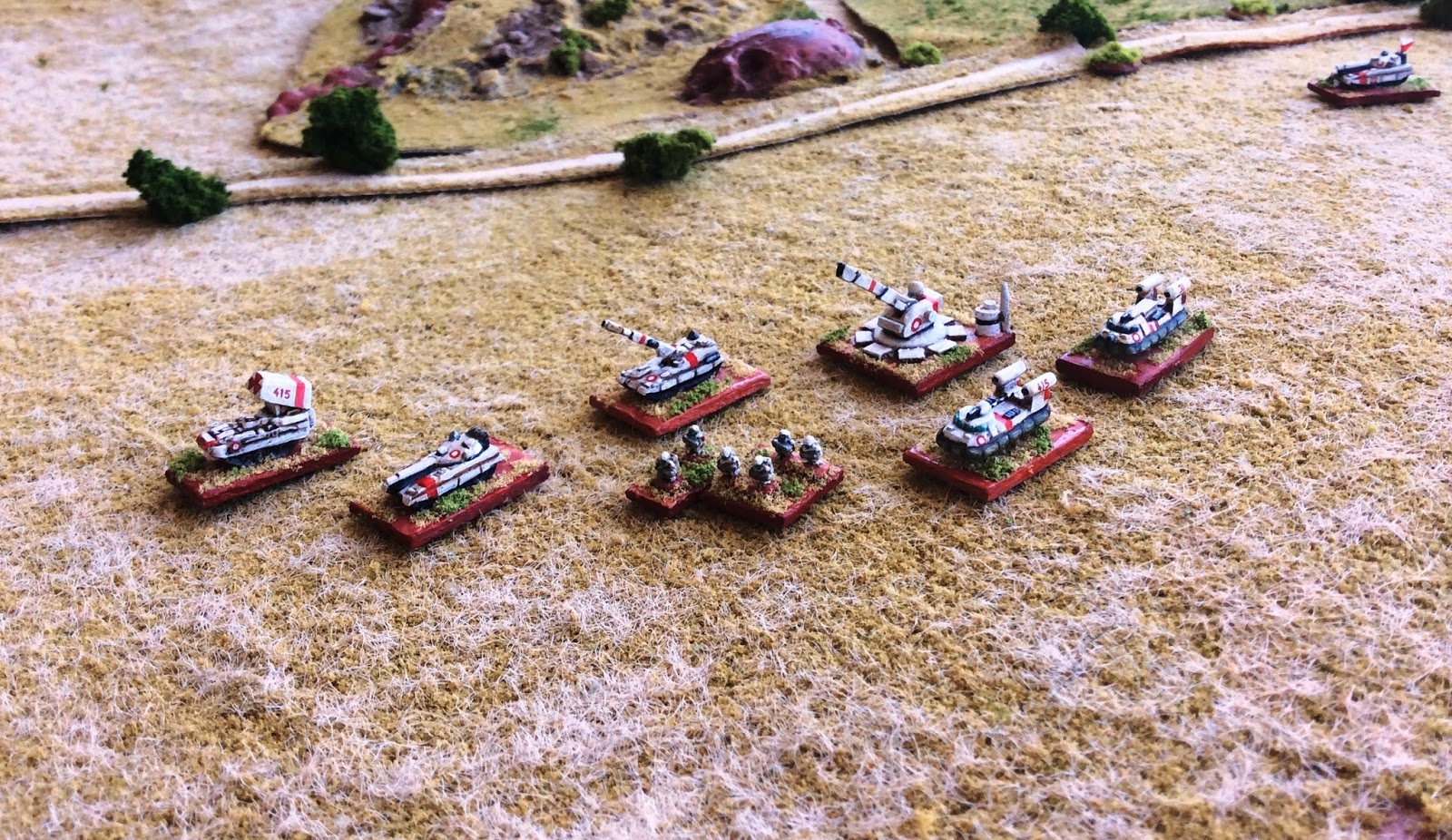 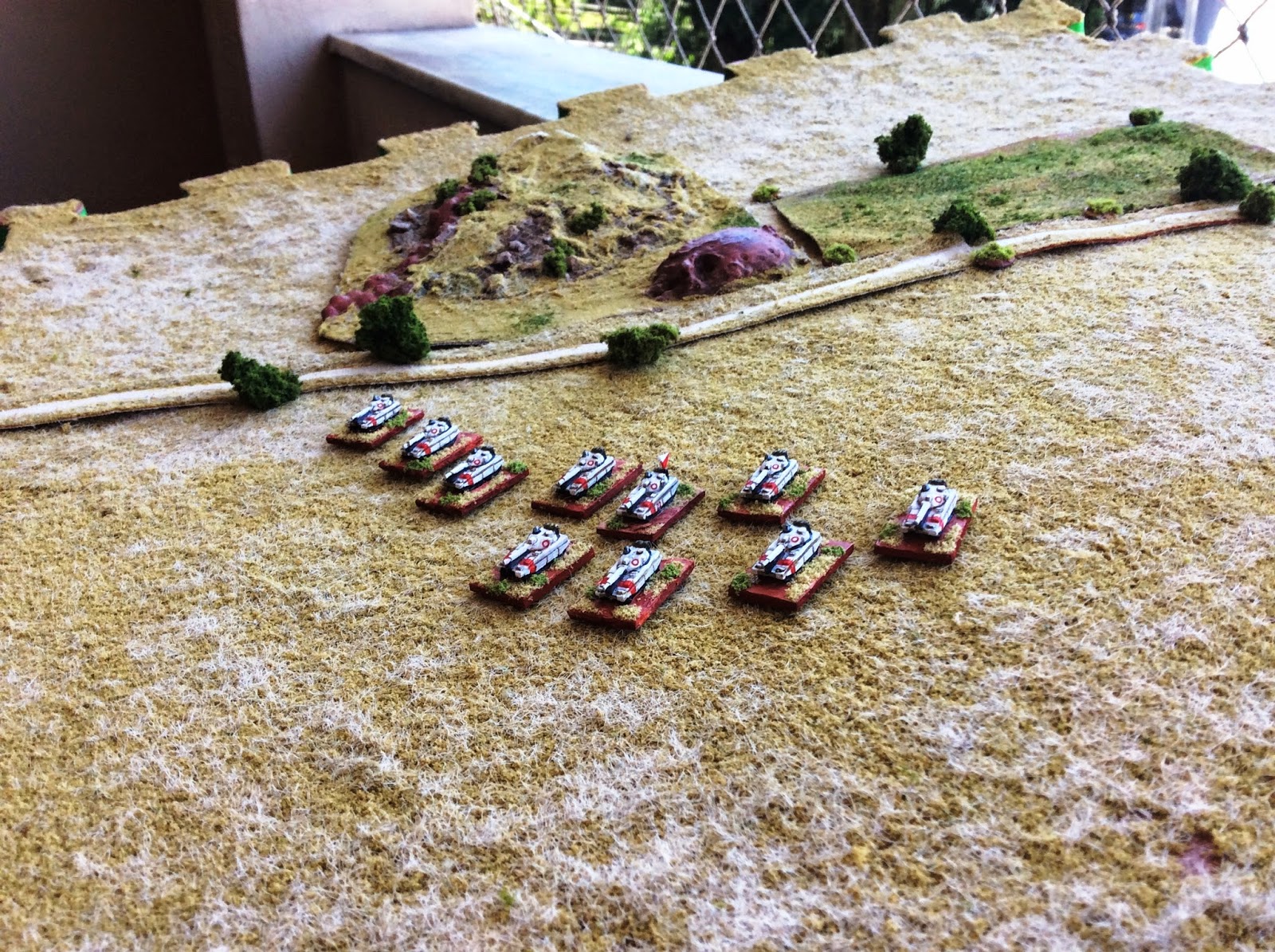 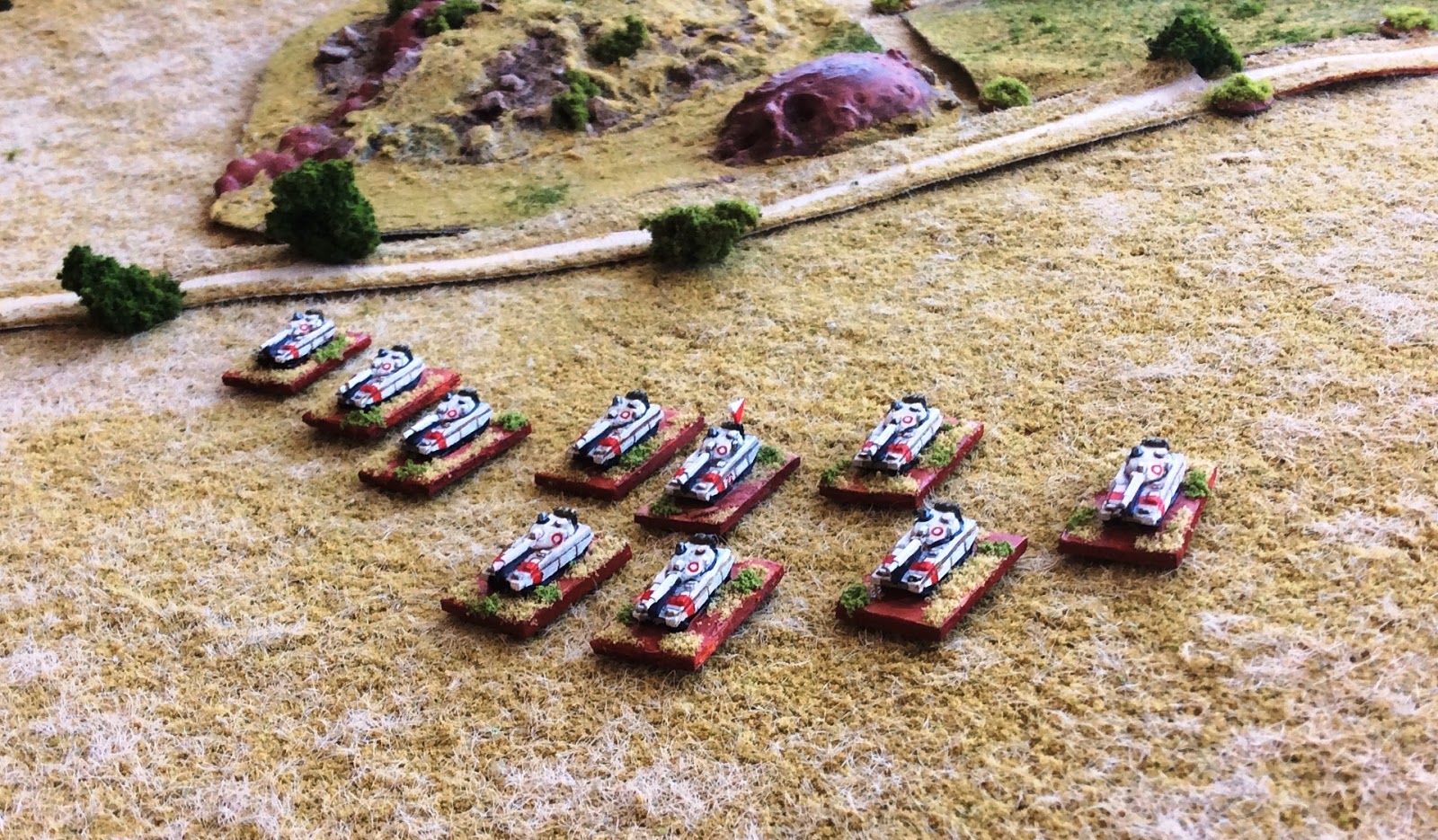 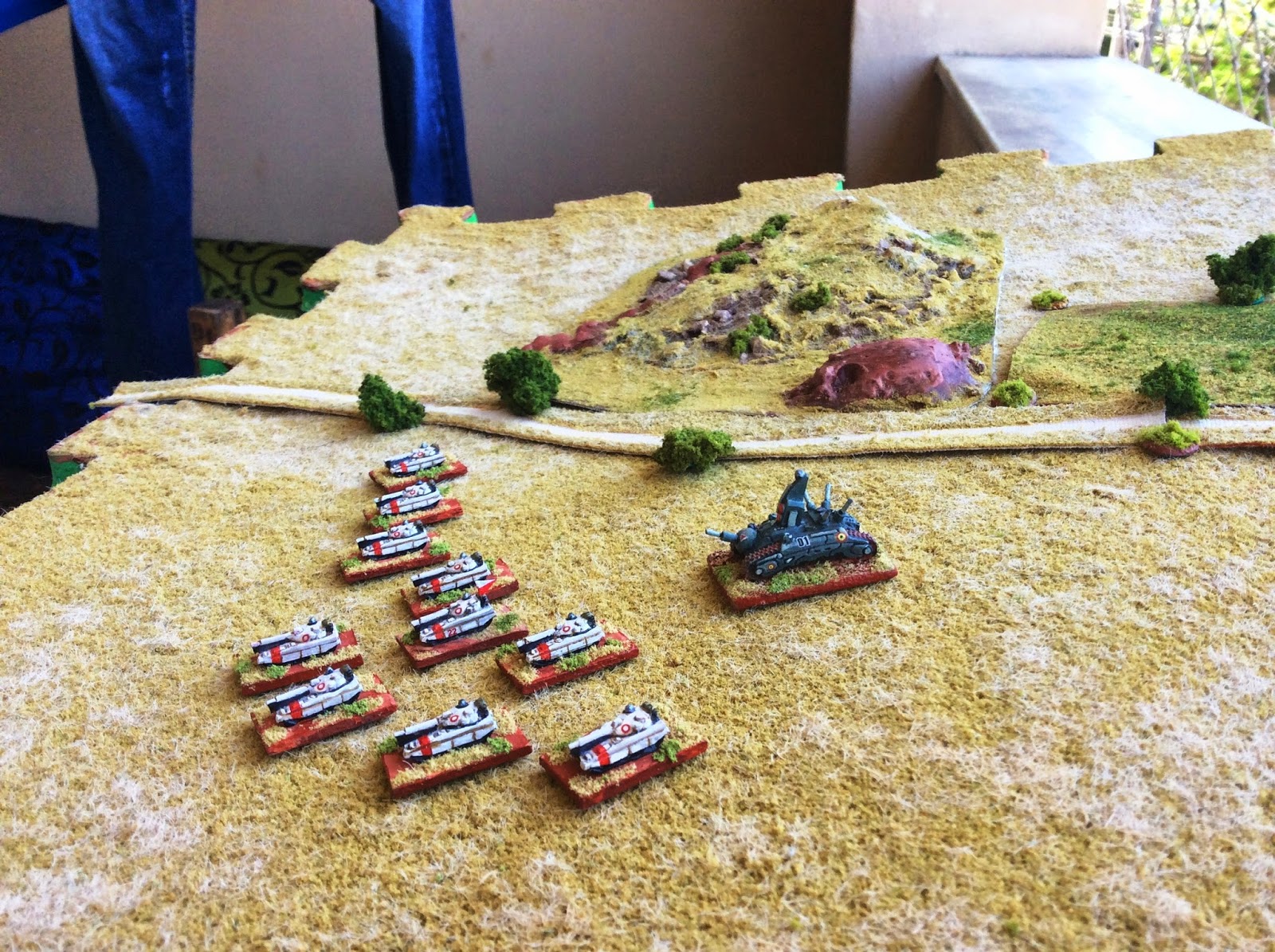 That last shot shows a company of Light Tanks being chased by the Mk III. This is the only unit I've got painted up for now.More pics next week, though, God willin' an'the creek don' rise!
Posted by Thaddeus Gregory Blanchette at 7:44 AM