I really wanted to have these guys done by Xmas, but I'm only 2/3rds of the way there. Still, that's better than nothing. So, without further ado, here's what the New Vistula Legion presence on Smade's World looks like so far... 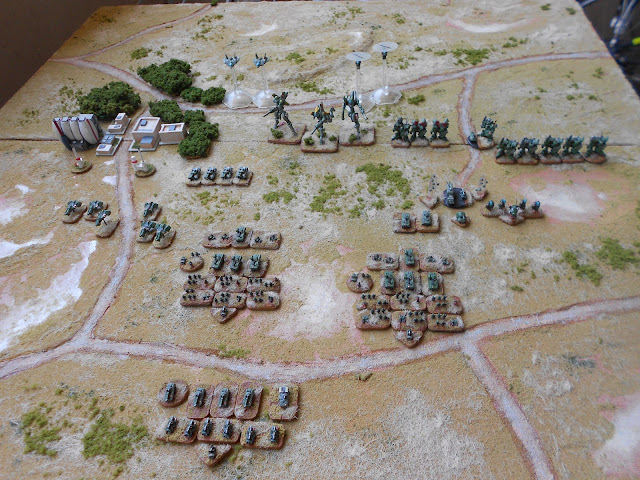 The entire force, laid out in parade order outside of the village of Crappensburg.

Most of the armor and infantry is 3mm stuff from 08.

The regimental command echelon and most of the support companies. To the left we have the heavy mortar battery, to the right the walker platoon, with hunter-killer drones attached. To the either side of the Regimental H.Q. we can see the rest of the drone company: two recon swarms. 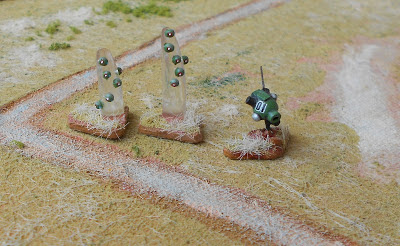 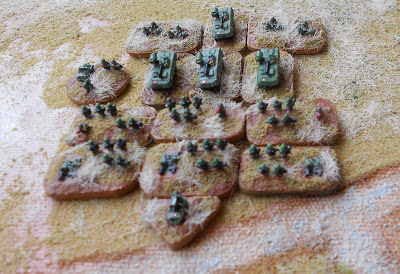 One  of the two Legionary motorized infantry companies already on-planet. We're currently awaiting the third. This is three platoons of infantry, a medium mortar battery and a jeep-mounted recon section, plus headquarters.

The light attack company. Unfortunately, the photo's a bit blurred. Three platoons made up of a mix of armored cars and Fast Attack Buggies, along with a medium mortar section, headquarters and jeep-mounted recon. 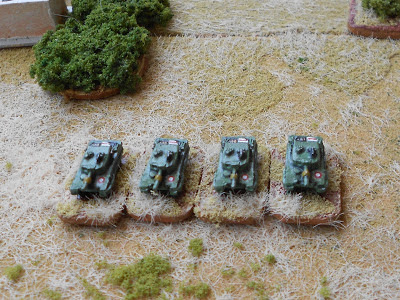 An armored regiment from the Second Mechanized Brigade (Regular Army) is inbound and expected in the next two weeks. This is it's first squadron: four troops of heavy tanks.

The 24th Uhlans have had some shipping problems and only one of their line squadrons has made planetfall. The regiment's command echelon and its heavy support company have managed to join Squadron A on Smade's World, however.

The figures are fleet-scale Earth Battle Frames from Dream Pod 9. 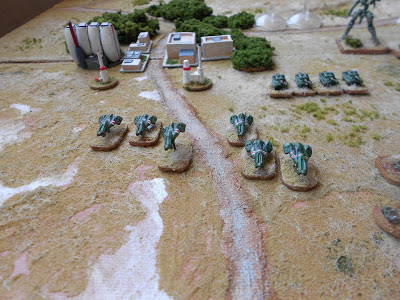 Two squadrons from a Fast Attack regiment have also made planetfall. Here we see them moving out from Crappenburg in front of the heavy armor. Until their command echelon disembarks, however, these 'speeders will be relegated to an infantry support role. 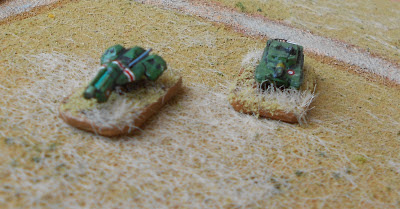 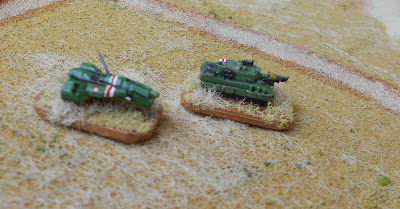 Close up photos of the 'speeders with MBT for comparison. The 'speeders are Harrier Class Gunships from Arbon Engineering, sold on Shapeways, done up in white detail material. As you can see, they scale well next to the MBTs and look like a fast GEV or landspeeder-like attack craft. 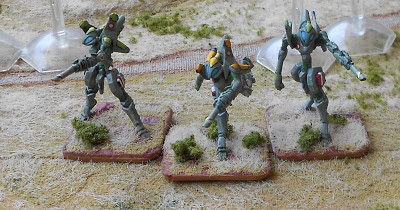 The 3rd Heavy Assault Regiment is made up of three "Spectre" class titans, nicknamed "the three graces". From left to right they are Maryla, Gabrjela and Serafina. They are made to order for the Neo-Poles by the Siliaz aliens and use black-box technology that's far beyond anything the human sphere can produce.

The figures are actually modified Dakini tecbots from the 28mm skirmish game, "Infinity". 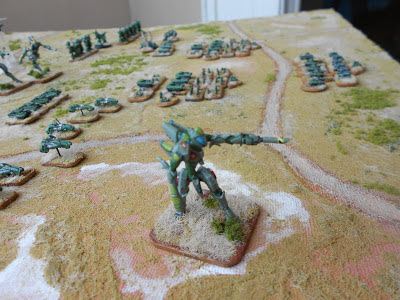 A slightly out-of-focus shot of Serafina.

Posted by Thaddeus Gregory Blanchette at 10:45 AM