One of the most interesting things about the relatively new microscales (2mm and 3mm) is the fact that they require new ways of thinking about and dealing with terrain on the tabletop. 1/600-1/900 is simply too small a scale for one to use normal terrain modeling approaches: the figures will be drowned out by the background details.

On the upside, no scale is more amenable to terrain module building. A normal terrain module for 15mm or 28mm scale would measure some 3x2 feet at least. In 2/3mm scale, you can easily make (and store) modules that are much, much smaller.

When I first started out with microscales, I went with the old-green-sheet as backdrop and pastels for terrain details route. You can see the results here. Not pretty, but certainly serviceable and with the plus that all the terrain involved can be stored in one toolbox. I still use this method for "away games" when I don't have access to motorized transport. I can pack all the terrain and figures in one big backpack and bike to the game venue.

But I quickly wanted to do beautiful, awe-inspiring terrain like the stuff here. I knew I couldn't get my stuff to equal that, but I wanted to get close. Using 30x30 cm composite wooden squares, then, I did these. These looked nice enough, but quickly warped. Furthermore, they were TOO detailed. In a battle like this one here, the terrain often got in the way of the figures.

So, back to the drawing board...

One day, walking through my local art supply store and musing, I ran into some cheap pre-stretched blank canvases on frames that were about 15mm deep and 30x60cm wide and long. I bought a bunch and began to experiment. So far, the results have been really good and you can see my sci-fi desert modules here. After my recent trip to London, however, and my purchase of the Black Powder rules (and a boatload of O8 ACW figures - with Napoleonics on the horizon), I knew I was going to need some 19th-century-ish generic European terrain.

So, to work! I thought I'd document the process so that y'all can learn from it, such as it is, and use or modify the tecniques here to your own satisfaction.

The basic idea is this: cardboard or styrofoam-backed artists' canvases with roads, rivers, hills and a smattering of other terrain, with the rest of the terrain features being pinned in place by map-pins flocked to look like bushes and trees. The pins go right through the canvases and into the underlying foam/cardboard and hold the terrain down. This is important because moveable 2-3mm terrain is very small and light and easily jostled during play. If you pin it in place, however, it stays put until you want or need to take it up.

This system works extremely well and looks great, so I'm very pleased with it so far.

STEP 1: CHOOSE YOUR CANVASES
I recommend 30x60 cm canvases, because this will give you 1x2 foot modules. The ones here are 20x40, however, because when I started the project I couldn't find any in the size I wanted. The ones here are el-cheapo brand, at 5.00 reais (2.50 USD) apiece. I could have bought some pricer ones at 12.00 reais (6.00 USD), but I wanted to keep costs down. I'm not pleased with the look these 20x40 canvases give, however, so I'll probably be doing some 30x60s some time in the future.

There are two considerations you need to keep in mind in Step 1:

1) Make sure the canvases aren't warrped. Line them up one the floor next to each other in various configurations. They won't jut up against each other with no gap at all, but you want to avoid out-and-out abysses.

2) Make sure the canvases are all the same thickness. Try to buy a common thickness here - like 15cm or 3/4th inch - so that you can easily find new canvases for further modules later. 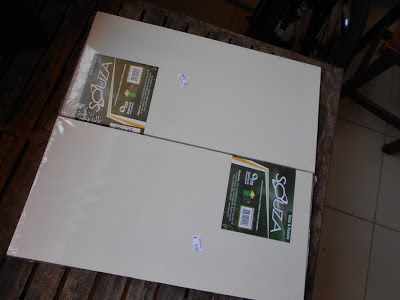 STEP 2: STUFF THE CANVASES
Glue styrofoam or multiple layers of cardboard into the backof the canvas. Seal the back with a piece of cardboard. 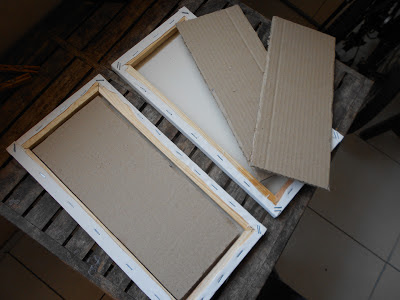 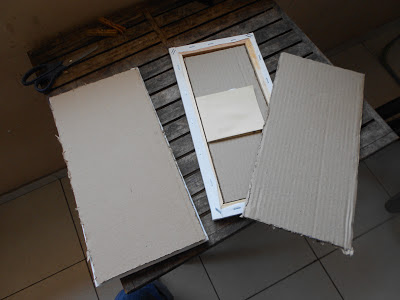 STEP 4: LAY DOWN THE HILLS
I use 3mm thick cork, glued down to the canvas. Of course, you could simply make all your hills seperately, so that they can be moved, but I'd rather have the main landforms solidly down on the modules, myself. 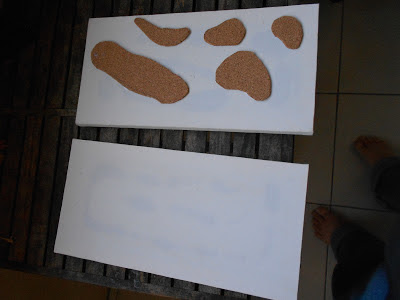 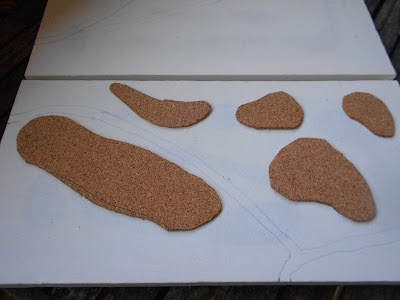 STEP 6: PAINT THE ROADS WITH TEXTURE
In this case Vallejo Dark Earth paste. 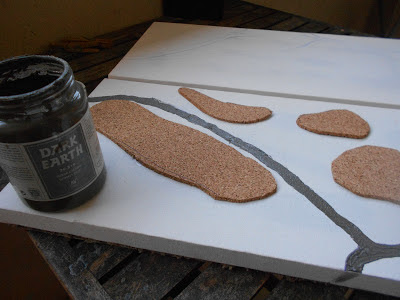 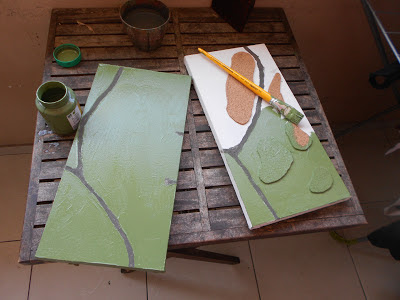 STEP 8: PAINT AND DRYBRUSH THE ROADS
This is ironically one of the hardest things. You need to record what paints you use so that you can get your roads to look the same on later modules. I didn't do this between the first and second batches of modules I built, so things look a bit off. Make sure, in this step, to paint the sides of the module where the roads come in the same color as the roads themselves. 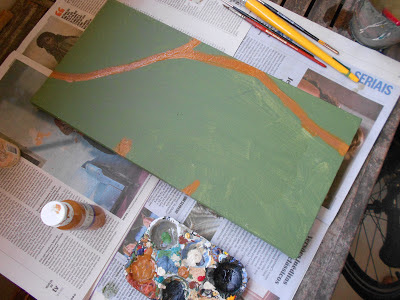 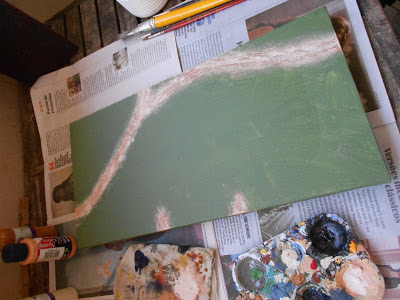 STEP 9: FLOCK THAT FUCKER!
First, however, re-mark your roads as they exit the module so you can flock their borders precisely. Brush a thick load of white glue over everything, shake a thick coat of flocking down on top, let stand for a minute, shake the excess flock off onto newspaper and pour it back into your flocking jar. The big thing here is to not let the glue drip down the module's side or get on the roads. If you mess up. take a wet brush and push the flocking off the roads and sides before it dries 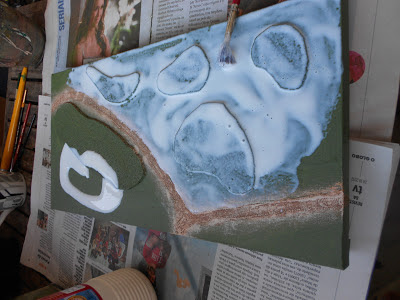 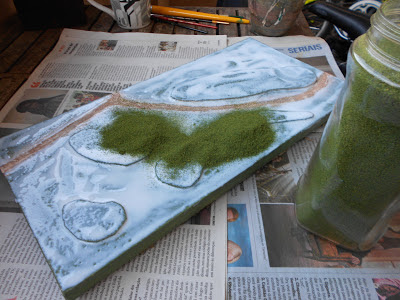 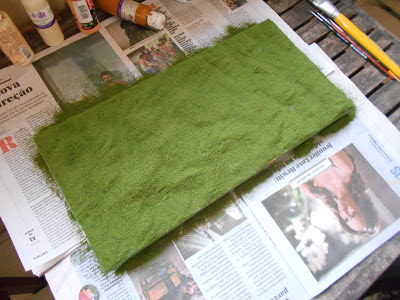 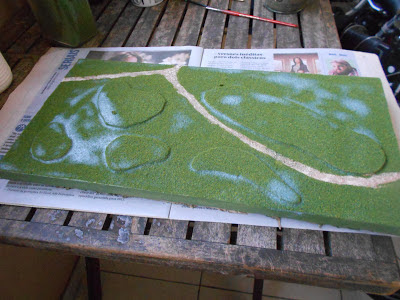 You could let the flock soak up glue for several minutes if you want. To me, however, that's a waste given the next two steps. I just wait a minute, shake it off and let everything dry. Note: do not do this where the wind or a fan can reach you, unless you want a very pissed-off significant other hacking up green foam for the rest of the weekend...

Posted by Thaddeus Gregory Blanchette at 9:15 AM