Photo of two regiments in the palm of my hand

This should give readers some notion of the... er... compact nature of 1/600 scale figures.

Note that the 22nd Brigade stands still need to be flocked. 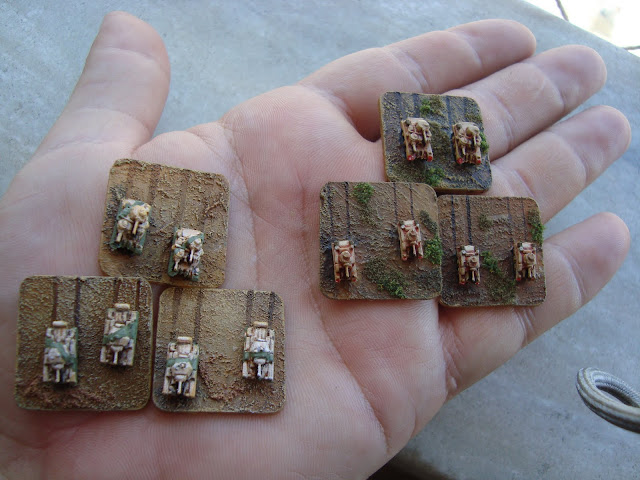 Posted by Thaddeus Gregory Blanchette at 9:01 AM 6 comments:

Final touches
As I mentioned in the last post, I decided to put sangars around the artillery and machineguns. These are built up with Vallejo Pumice and allowed to dry. They are then painted with Burnt Umber and dry brushed with Mahogany.

Some of the painting is also touched up - particularly a few of the flashes and some treads. More Seinna wash is applied under the tanks to give the effect of shadows at high noon. The Armored Car company's base edge is painted in Sand. The other bases, being commerically bought transparent acrylic, don't need this final touch. In fact, they look better with out it.

Flocking
Woodland Scenics Fine Earth flocking is laid down in patches to cover up any obvious base lines or hairs that inadvertently got painted into the base. After the glue dries, small splotches of Green Blended turf are stuck on here and there - about three or so per base. Again, this is mostly done to highten the contrast between the tanks and their bases.

Finally, the miniatures are carefully brushed off to remove any lint or hairs and two more coats of spray varnish are applied.

Here are the final results (again, apologizing for the poor lighting): 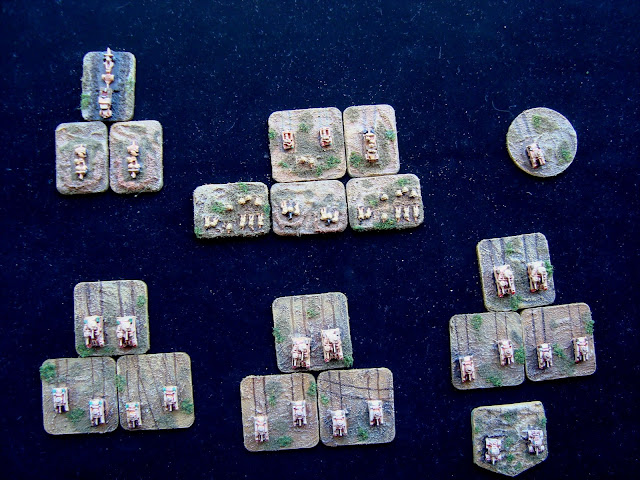 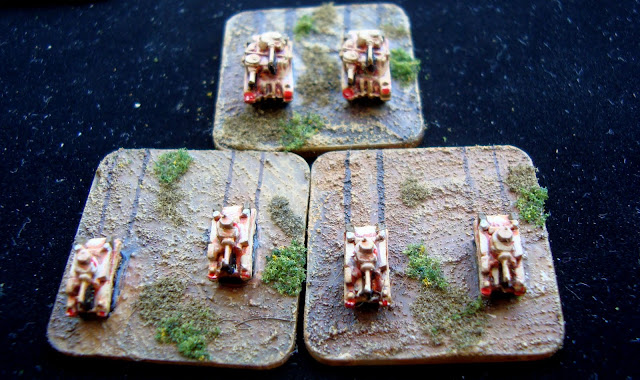 A tank regiment, Honeys in front, Grants in back. Looks like I missed a hair on that lefthand Honey base. More flock! 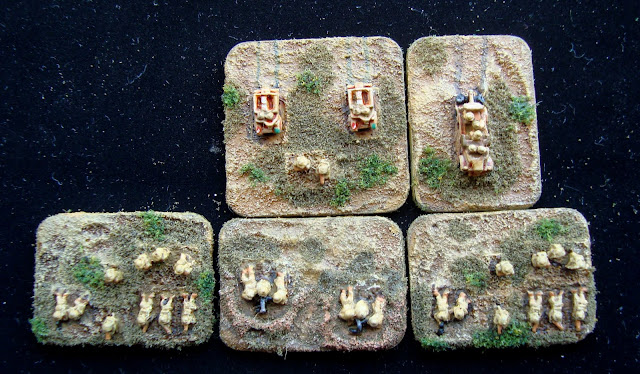 Motor rifle battalion. Infantry and machineguns in front, 2lb portee ATG and carrier company in back. 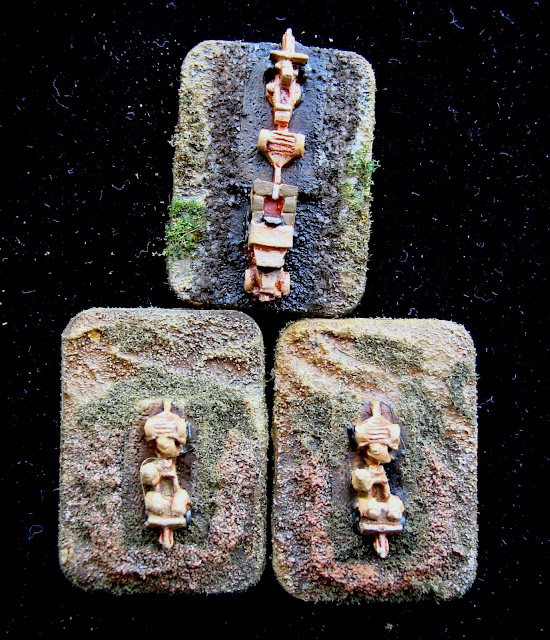 Total elapsed time on this brigade was probably about two hours. Now onto the next brigade, which I have decided will be the 22nd Armored and not the 2nd, after all.

Posted by Thaddeus Gregory Blanchette at 3:00 PM No comments:

Now that everything's basically painted, I grab my smallest brush and go for the details.

Again, one must recall what scale you are working in. Details should only be those things that can clearly be seen at arms length. This means, basically...

1) Painting treads and wheels black and (depending on the model) lightly drybrushing them grey.

2) Painting under the barrels of guns. In order to support gunbarrels, O8 leaves in a bit of flash. This can't be removed without breaking the gun barrel. There are three ways to deal with this:
A) Cut off the barrel and the flash, drill a hole in the model and mount your own barrel. I can't be bothered with this as O8's alloy is just too strong. It's too much work for too little effect, IMHO.
B) Leave the flash the color of the model in general.
C) Paint the flash black. This is what I do, as I feel it looks better. YMMV.
In any case, the detailing step is where any painting of the flash is going to be done, if it is done.

3) Paint windscreens black or dark blue. If you're a real nutter, highlights can be added, too.

4) Other details as come to mind. In my case, this means painting the Honeys' back storage bins varying shades of green, painting their auxilliary gas tanks light grey and painting any jerry cans green or grey-blue.

5) For the infantry, asms and legs are painted Dark Flesh, rifles and shoes get a coat of Brown and machinguns and other heavy weapons are painted Black. I occaisionally outline prone infantry figures with a Sepia ink wash in order to give a better contrast with the base. This being the Western Desert, I paint weapons crews' torsos in dark flesh, too.

6) Finally, little colored bits are added. It would be reasonable to assume, at this scale, that one wouldn't see national markings, unit badges and the like. But you want at least some color to further break up the camouflage effect discussed in the last post. In this case, I make little red and white scribblings on the tanks' front bumpers. Honeys get a white-red-white armor flash on their left turret side and Grants get the same on the left sand skirt. Finally, the infantry brigade's vehicles get a green motorized infantry flash.

Here are the pictures and I apologize for their quality (I REALLY need to build myself a light tent, but with the xmas bills coming in, that may take a few more months)... 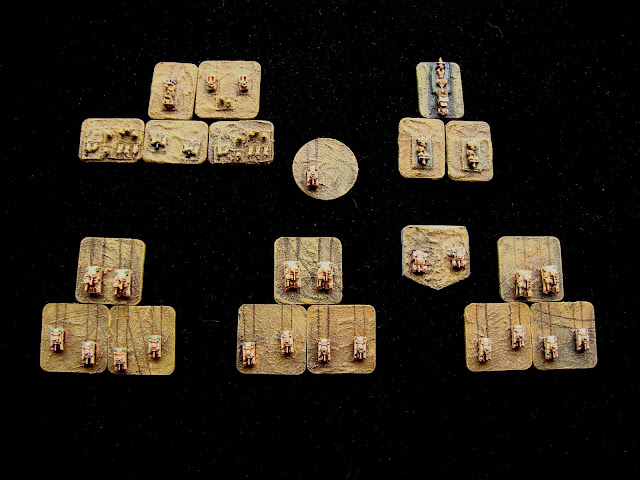 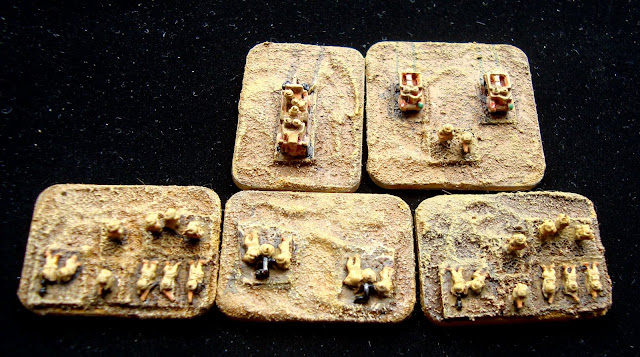 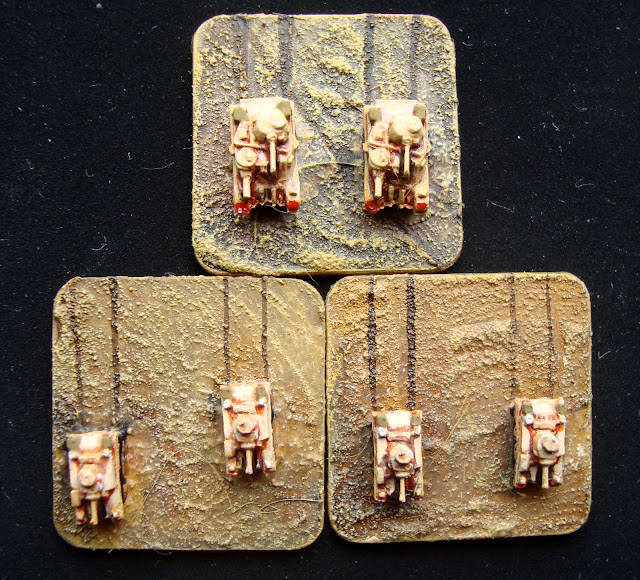 Figure 3: Tank regiment, seen from above. 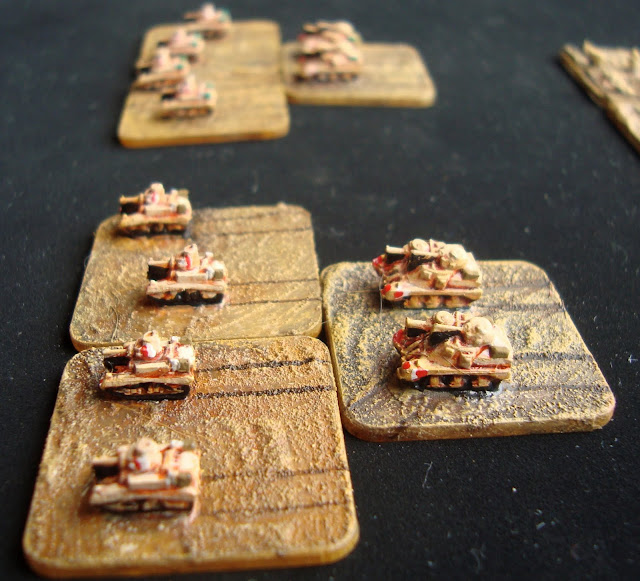 Figure 4: Tank regiment seen from the side.

At this point, it's a good time to pause and do two things: check for problems and apply a coat of matte spray varnish.

In the photos above, I can see two main problems that I'll want to fix in the next stage.

First of all, I live with two cats, so there's always fur and lint in the air. As you can see in Figure 3, the smallness of 1/600 scale means this stuff shows up even more than usual, especially on the naked bases. No matter how much I clean, some always gets in and this means that I'll have to flock these areas over.

Secondly, the bases of some of the figures - particularly the artillery - didn't get as covered as I would wish during the basing stage. I plan to solve this by judicious use of flock and by building sangars around the artillery pieces. This will be what I do next, using Vallejo White Pumice paste to build up the sangars. For better differentiation, I'm also going to add sangars to the machinegun unit's base as well. Mortars will be sangar-less..

Regarding varnish and 1/600 scale figures

DON'T brush on varnish: DO use a spray varnish.

While it is possible to brush on varnish in an emergency, you need to water it down and pay careful attention while its drying so that it doesn't pool. Tiny pools of varnish which could be overlooked even on 6mm figures are disasterous at 2-3mm.

For this reason, you should use spray varnish, wherever possible. Even then, you need to be careful to not over do it. Multiple light coats is the way to go here.

At this point, I prefer to put down one or two light coats to protect the figures' paint jobs from my fingers during the flocking and final basing stage. After that's done, I'll touch up any (hopefully few) raw bits and apply more varnish, after carefully brushing away excess flock and cat hairs with a dry brush.

Posted by Thaddeus Gregory Blanchette at 5:55 AM 3 comments: