I just got a bunch of Monopoly City buildings in the mail, bought at Boardgame Geek's virtual market. I'd seen the wonderful city pieces produced by Fen Edge Wargaming for his dieselpunk air combat games and I wanted something similar for my 3mm sci-fi set up. Turns out that Warren Colegrave was selling his copy of the Monopoly City on the 'Geek for a very reasonable price. Mr. Colgrave lives in Canada, but he politely agreed to sell me only the building pieces and to send them to me in a cushioned envelope in order to avoid customs fees.

Two weeks later they arrived in Brazil and I started painting.

The pieces from Monopoly City are all different scales and sizes, but they work well together and with old-style Monopoly houses and hotels, as well as the Microform white metal buildings in 1/900 scale that Ana Paula gave me for Christmas in 2010.

I've mounted them all on plasticard and the resulting blocks can be combined in any number of different ways to make cities, towns and villages.

Here are some quick photos of everything I've built so far, laid out along with some roads. The roads have not been pinned down to the table, as they should be, so they look a little sloppy. Also sloppy is the camera work, which is certainly not as crisp as it could be. I plan to take some better pictures soon.

These buildings have been put together over the past 7 years, a bit at a time (excpet for the newly acquired Monopoly City pieces which were all done in a week). In spite of the varying scales and the fact that some of the buildings have windows painted on while others are more abstract, everything hangs together quite well, I think. 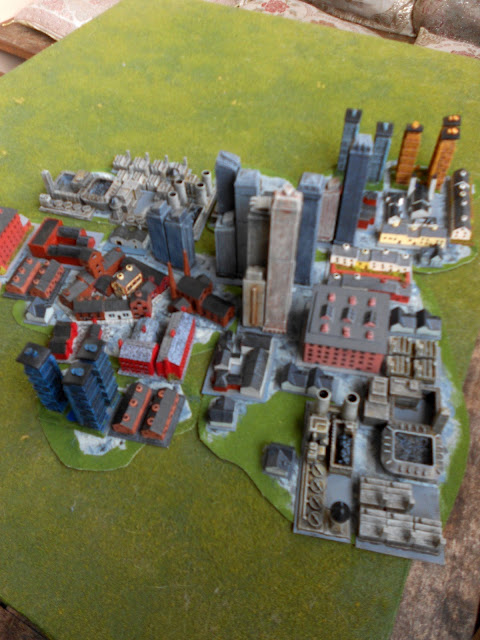 The first shot shows Picoburg before I laid down the roads, suburbs and airport. In the upper left- and lower right-hand corners, you can see the industrial districts that are made completely of MC pieces, as are the downtown highrises and the apartment complexes on the edge of town.

To the left of center is Olde Towne, the historical city center, with cobbled streets, the cathedral and a medieval city block made out of PicoArmor's Monopoly buildings. The low-rise housing complexes are simple wooden blocks covered in cardboard and gussied up with balsa bits and plasticard. You can also see some Microform buildings in the block just south of the business district. 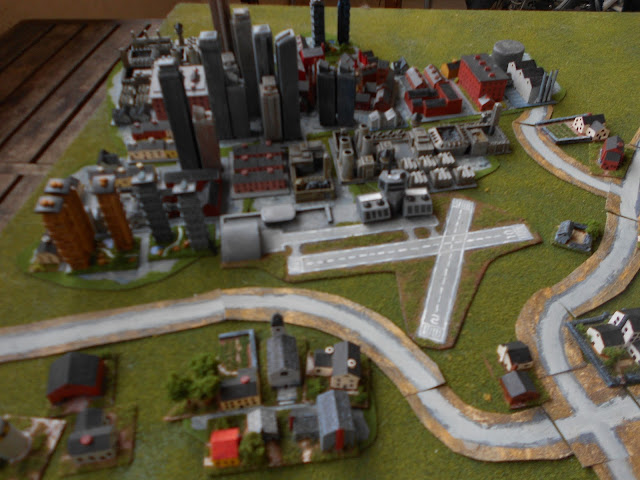 Here's a shot of the city from the suburbs and surrounding farmland. The airport and roads have also been placed down now. Most of the village pieces are made out of a combination of Monopoly buildings: some PicoArmor, some Brazilian plastic Banco Imobiliário pieces and some old-school wooden houses and hotels picked up on Ebay. The airport is scratchbuilt.

Roads are painted and textured artist's canvas. They should be pinned down and look better when they are. Here, they're just thrown down and it shows.Since I've taken these photos, I've also trimmed their margins a bit. As you can see, they are too wide here. 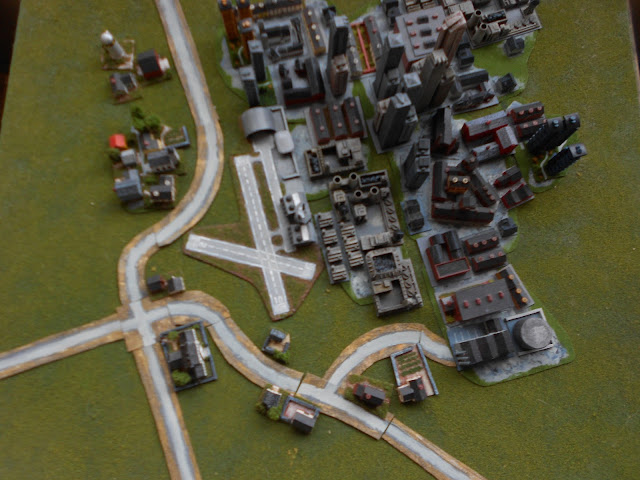 And finally here's an aerial shot of most of the city, some farms and a suburb. Next build: Picoburg Federal University, home of the Fighting Pixels!

On my "to buy" list now are Brigade Games wonderful 1/1000 (2mm) pieces (which can be seen here at PicoArmor). I plan to put these down on their own blocks, so that they can be used seperately from the pieces shown above. I think they'll look just fine together, however, as long as they are used en masse.


Recent discussions on TMP have revolved around what buildings one should buy for 3mm gaming. I hope this shows that a wide variety of materials can be used, almost indiscriminantly and without much care for "proper" scale. Here we have pieces that go from 1/700 to 1/1200, but the overall effect is quite acceptable. Of course, some care must be taken when composing blocks and even moreso when putting blocks together in cities, but still...

So the answer to the question of "What buildings should I buy?" is "All of them". You should strive to have a wide variety of pieces available in your modeling kit which you can mix and match as the mood takes you (or as period demands).

The best, most beautiful pico terrain pieces out there are by Angel Barracks (3mm English early 20th century town) and Rod Langton (about 1.5mm for Napoleonics). AB's village will set you back 30 quid, however, while Langton's town hall alone costs five pounds!

Another boardgame that can be mined for terrain pieces is Big City. Because this is a classic eurogame, currently hard to find, it'll set you back a bit more than MC. Still, the pieces look to be compatible with MC and a copy is up on the 'Geek right now for $32.00 USD.

There's also Irregular Miniatures 2mm stuff (which is closer to 1/1200 scale, actually). I love IM and they will always have a fond spot in my heart for introducing picoscale gaming to me. I have to admit, however, that their terrain is simply not up to current market standards, however. Nor does it mix very well with the other lines noted above.

I hope this gives prospective 3mm players an idea of what's available and what can be done with regards to 3mm urban terrain. You can also take a look at Steel On Sand's wonderful comparison shots of some popular 3mm terrain lines. When one uses all these pieces together, en masse, the difference between 1/1200 and 1/600 really doesn't show. If you're only going to be using a few buildings, however, it's probably better to make these all one line or a couple of easily matched lines.