Here's Kampfgruppe Hiltner, shaking out from its nightly laager on the steppes of Southern Russia in the summer of 1943.

This KG has been formed around the division's panzer regiment and includes two full-strength panzer battalions, plus the divisional armored panzer grenadier regiment. A 105mm artillery battalion, a Marder battery, a halftrack-mounted engineer company and a heavy flak battery have been added in support: 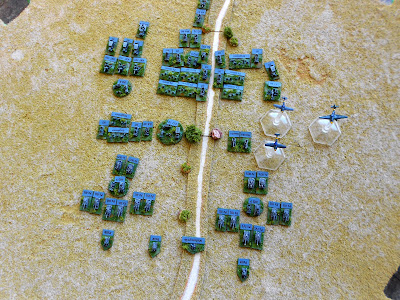 Bf-109s protect a Stuka as it flies out in front of the KG, seeking targets of opportunity: 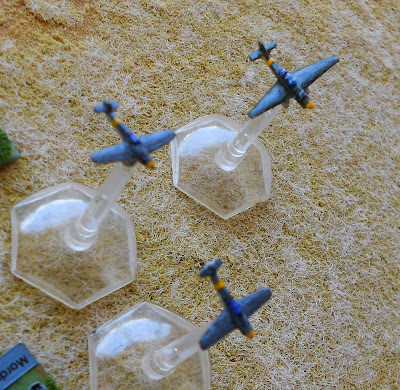 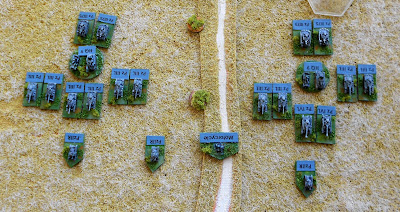 Above, we see the panzer regiment, forming into two battalion-sized panzer kiels, one on each side of the highway. The regiment has been newly re-equipped and has 3 large Pz II recon platoons, 5 PZ III 50L companies, 2 Pz III N companies (for infantry support work) and two Pz IV F companies.  A motorcycle recon platoon detached from the Panzer Grenadier regiment accompanies the advance along the highway.

(For those of you who may be confused about my organization, tank and infantry stands represent half-companies while weapons stands are usuaully batteries. Recon units are generally platoons.)

Finally, below we have a shot of the KG's half-track-mounted panzer grenadier battalion. This also includes substantial support from the parent PG regiment. To the battalion's right, a battery of 88mm canon have deployed, covering the open steppe to the nort. To the left, the artillery battalion has unlimbered and prepares to support the advance of the panzers: 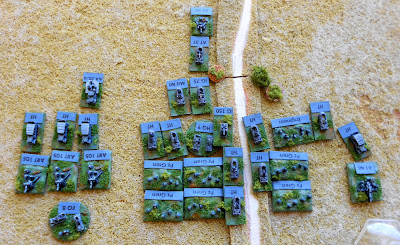 Posted by Thaddeus Gregory Blanchette at 7:38 AM No comments:

Crowd-Sourcing a Basing Decision. Your thoughts?

I've decided to go with 20x10mm bases, minimal flocking and a colored label at the bottom, explaining what the unit is.

The Russians look good already. What I need to do now is choose a color scheme for the Germans' labels.

I'm looking for a mix of legibility and attractiveness. Please tell me which scheme you think is the best. Top panzer is #1 and bootm panzer is #5. (Note that #5 panzer still needs to be flocked.) 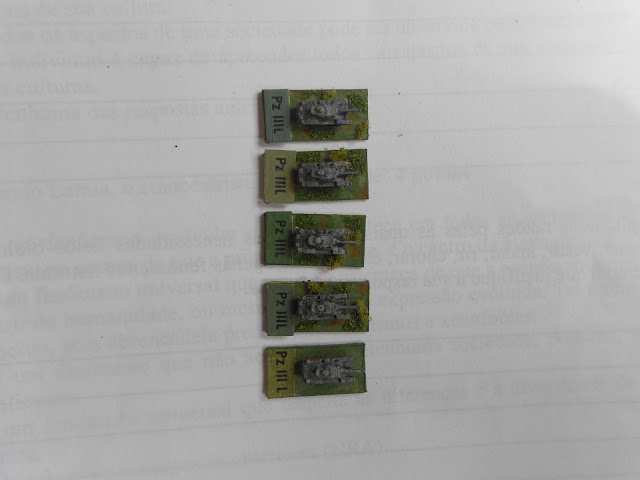 Posted by Thaddeus Gregory Blanchette at 7:14 AM 3 comments:

Over the years, I've tried several different basing solutions for 3mm WWII miniatures. The key point to all of these solutions has always been to base contrary to the figures' colors. So if I got green Soviet tanks, say, I try to make the base brown and yellow. Gray German tanks will get a green base and so on.

This basing scheme was harder for the North African desert, but even then you could tweak it.

After seeing Nogegon's basing scheme for his 3mm Turkish NATO forces, however, I've re-thought my use of flocking for 3mm figs. I'm now convinced that basing needs to be as simple as possible. But anyhow, here's a selection of my various basing schemes. Let me know what you all think. 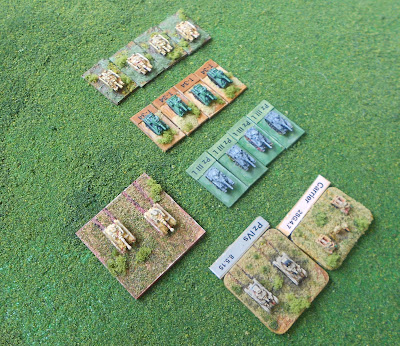 The base in the lower left corner was my first attempt, followed by the two bases to its right. Here, I was planning on each base being a company or battalion. Then I decided that having two tanks so close together was unrealistic. Besides, if I was going to use two castings for each company anyhow, wouldn't it be better to base them seperately and call each stand a half-company? Blitzkrieg Commander is scaleable that way, so why not? It would allow me to have even more flexible formations.

Here are two more photos of the stands: 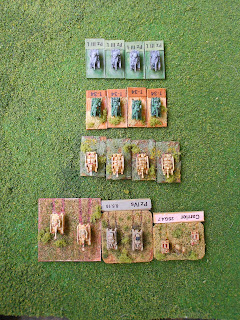 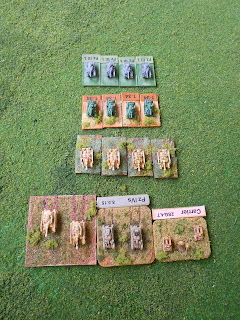 As you can see, I've gone with progressively simpler basing arrangements on the half-company stands, culmulating in the green German stands, which have no flocking whatsoever. I think this last step might be TOO radical, however. I'm thinking of putting some fine, medium green flocking on those bases, but I'd like to know what people think.

What this shows is that one needs to be exceedingly careful when thinking og basing solutions for 3mm figs. It's easy to drown them out in the "noise" of the base's granularity, which is very realistic, of course, but a bad idea for tabletop wargames.

The most granular and "noisy" bases here belong to the Carrier company and the Stugs. The PzIV S company's base is also highly granular, but in this case, the lighter paint scheme of the panzers makes them visually pop right off the base.

So what do you think?


Posted by Thaddeus Gregory Blanchette at 9:59 AM 2 comments:

Here's a Soviet tank brigade from early 1943. The figures are O8 3mm and each stand represents roughly a half company. 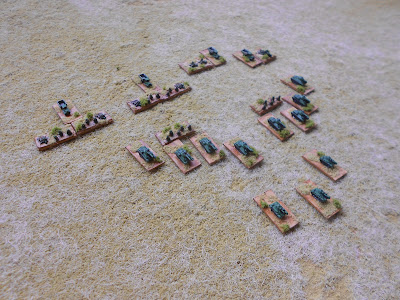 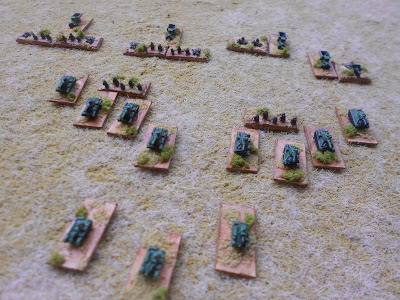 Again, I've based these figures against their color scheme, so it's brown/yellow/light green bases versus dark green vehicles and brownish infantry.

Urra!
Posted by Thaddeus Gregory Blanchette at 9:22 AM No comments: