The People's Revolutionary Industrial Council and Syndicate is an armed workers' movement on Smade's World which fights to take direct control of the means of production away from the Noble Houses and Corporations which currently run unobtanium mining and hyandwavium processing facilities.

Following a surprising string of recent victories, the PRICS have recieved off-world support in the form of the New Vistula Legion. The Neo-Poles hope that by supporting the revolutionaries, they will gain a foothold on Smade's World and a small but lucrative chunk of the handwavium trade.

Here we see the rebel column of Commadante Ima Ben-Dayo as it forms up in front of the recently occupied R-5 refinery: 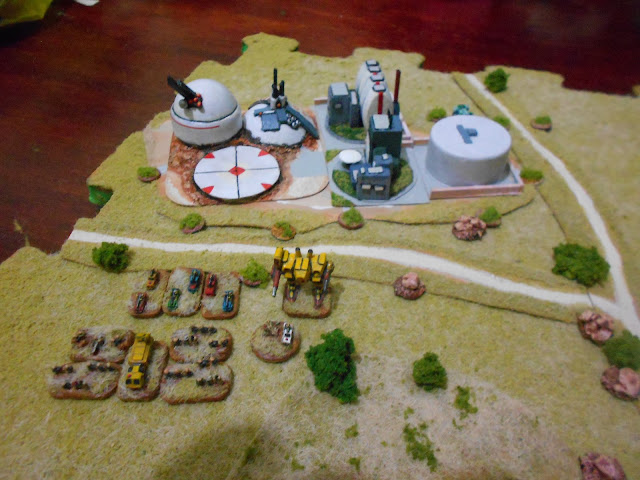 The column's infantry is equipped with serviceable extruded plastisteel body armor and small arms. It's backed up by a large Plasma Infantry Gun. Re-purposed heavy trucks with hastily applied armor panels carry the company. Ben-Dayo's trucks are also equipped qith heavy mortars, thrown together in liberated machine-shops and mounted on their roofs.

Here's a close-up of the column: 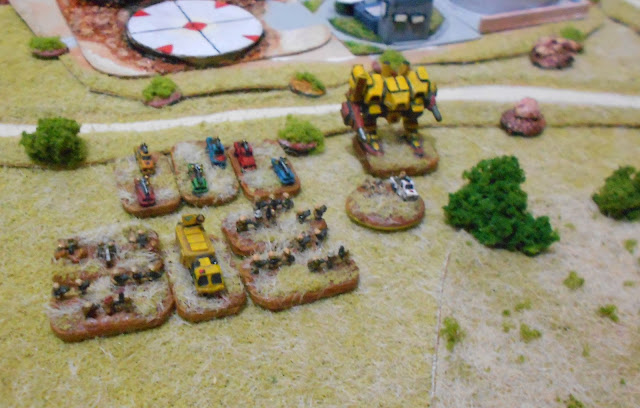 Finally, here's the R-5 refinery from another angle. It was made out of parts of a deoderant stick, a plastic pinbox, chunks of balsa wood, beads and many bits of plasticard, tubes, and greeblies. 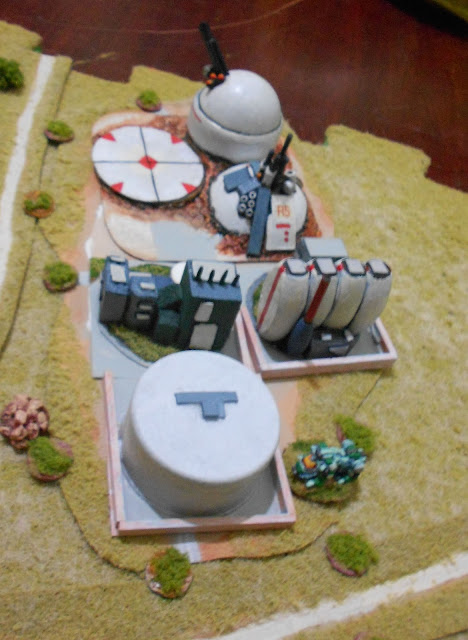 The PRIC miniatures are all from Oddzial Osmy's Modern range except for the Mecha which is a Risk "graffiti" piece. When I pulled it from the game, I noticed that the Chinese factory that put the casting model together had obviously stuck its legs on backwards. I had to cut them off and turn them around.

Here's a quick set up for a battle showing my new terrain system and some of my 3mm sci-fi miniatures.

The system is built on half-meter square, 10mm thick "foamies" that can be linked together. One side of the foamie is flocked spring green, the other yellow. My old canvas modules have been dismounted from the frames and cut up. They are pinned to board with tacks and stick-pins disguised as rock piles and vegetation.

Here, you can see me holding the foamie with all the terrain pinned to it at a 90 degree angle compared to the floor. As you can see, this stuff is on there pretty firmly... 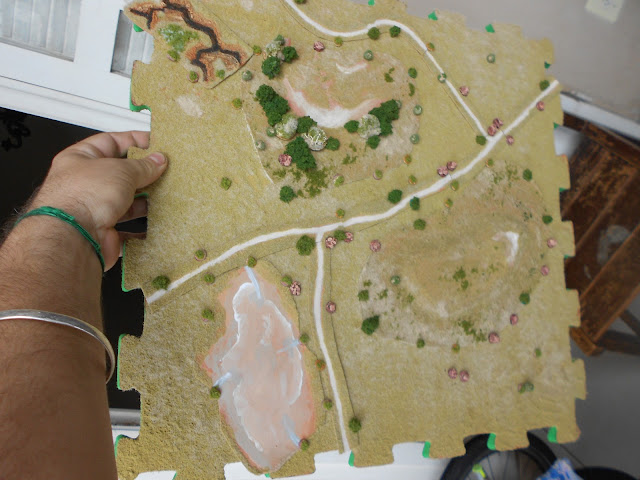 Here's a top down shot of the foamie with miniatures and buildings in place.... 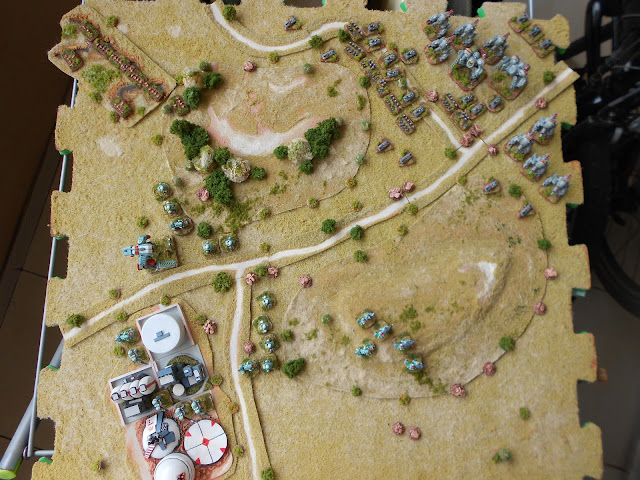 A shot of the R-5 handwavium refinery. The Lafitte Regiment's Fire Support Squadron currently occupies it. In the background, we can see a Lafitte titan guarding the road. It's screened by two squadrons of heavy mecha. 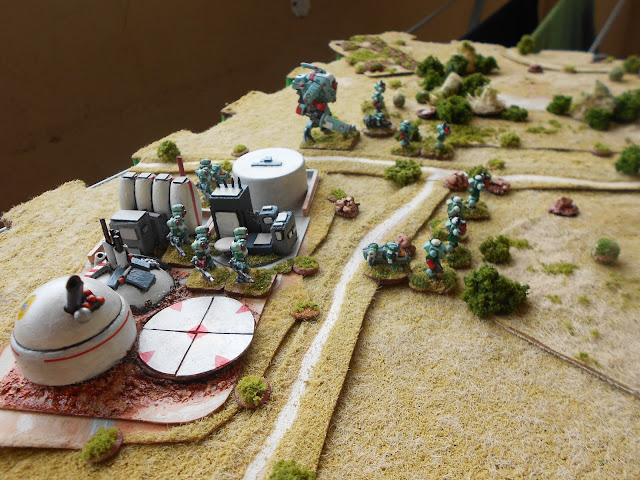 The Lafitte's titan is a monster. One of the heaviest and best armed in the Human Sphere. In reality it's a 28mm Tau power armored trooper repurposed from Games Wankshop. You can see some 2mm Germy power armor troopers on its base, put there for scale. The heavy mecha are Ground Zero Games 6mm infantry walkers from their "Not-Votoms" line: 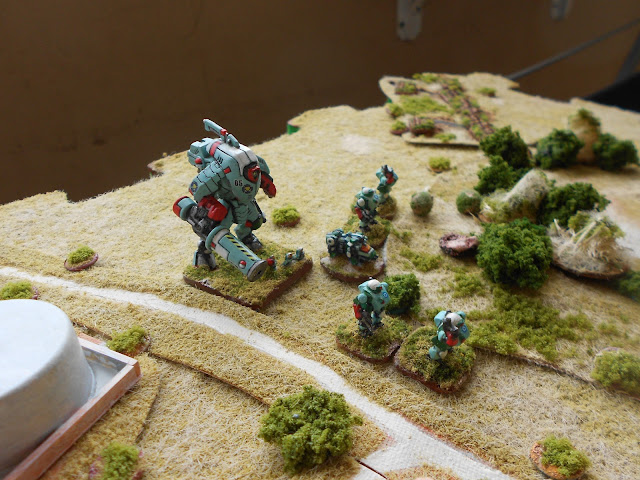 Two companies of local House Penn-Taylor militia hold a trench line to the north of belt of Ramen Trees. 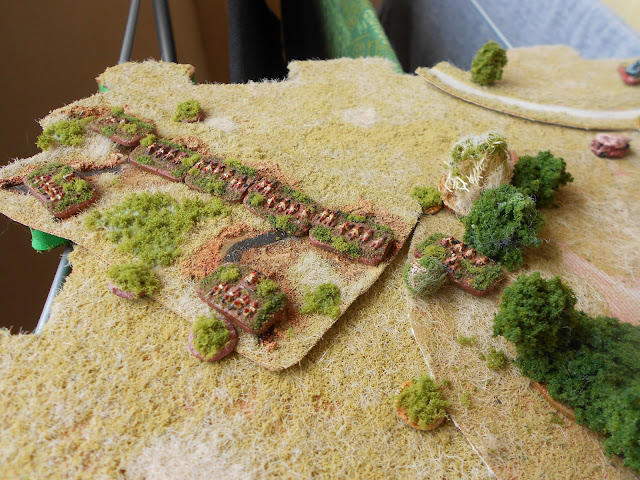 The Lafitte's anti-mecha squadron, made up of four troops of Stalker mecha, hide just below the crestline of the hill. Behind them is their HQ unit, mounted in Sloth command mechas. 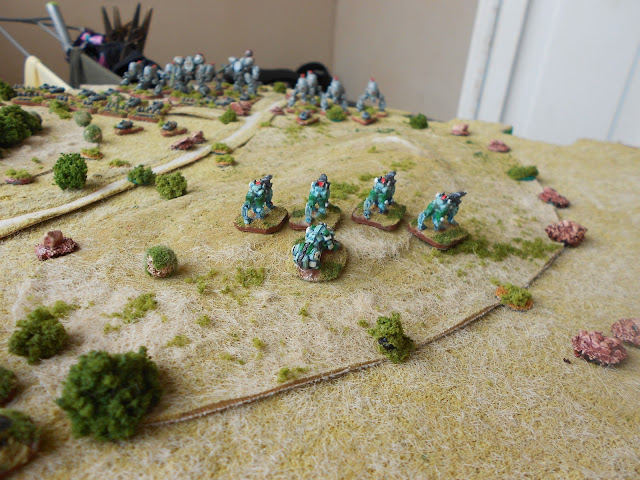 Titans from the Third Combined Arms Combat Team, preceded by two companies of IFV-mounted infantry and a recon troop, advance on the woodsline. 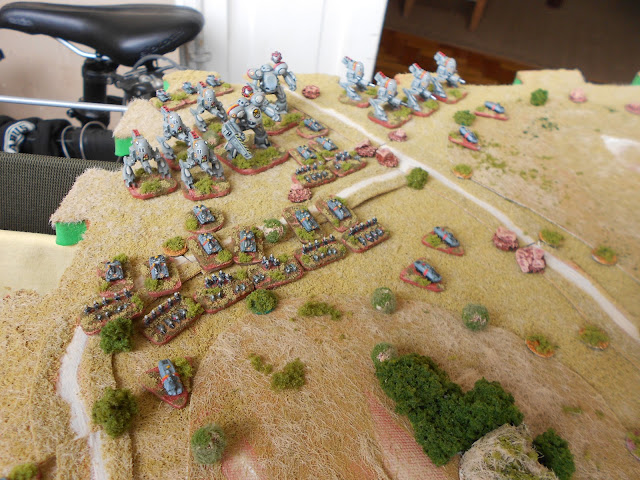 Shot of the Laffite titan from the rear, showing its escort squadron, with Sloth-mounted HQ: 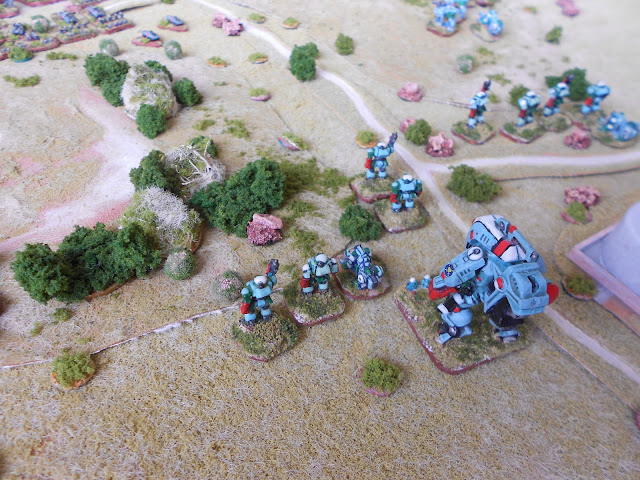 Another angle showing the 3rd CACT's main line of battle: 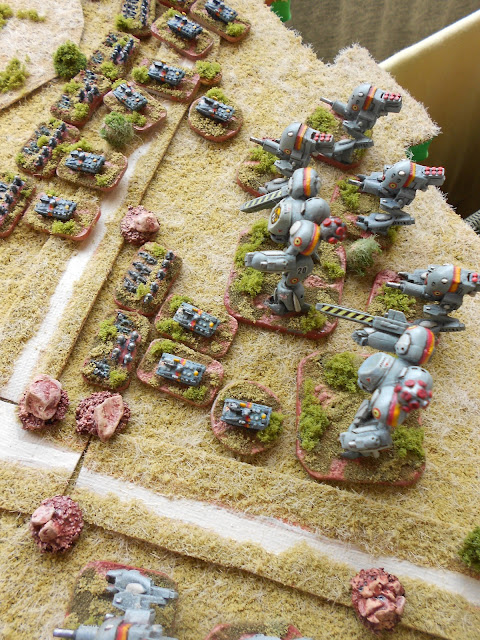 Posted by Thaddeus Gregory Blanchette at 8:19 AM 7 comments:

Here are some pictures showing German assault guns set up in an ambush position along a road in northern France. The figures are all O8 3mm and the terrain is homemade. 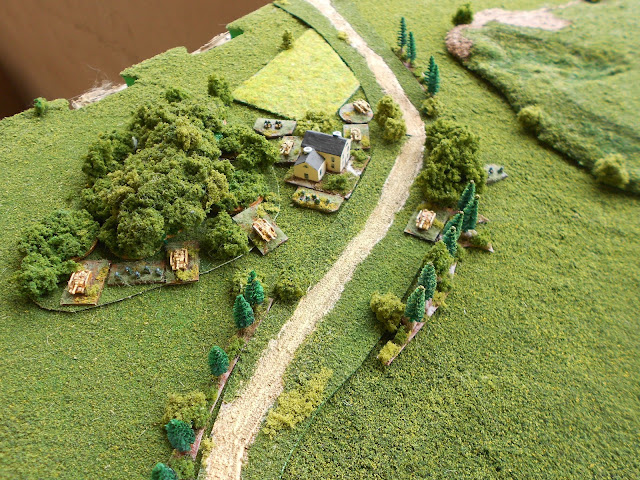 Two companies are deployed forwar along the tree line while one company is held back in reserve with the engineers and recon  in a small hamlet. Here's an overhead shot and a view of the main defensive position, from the front. 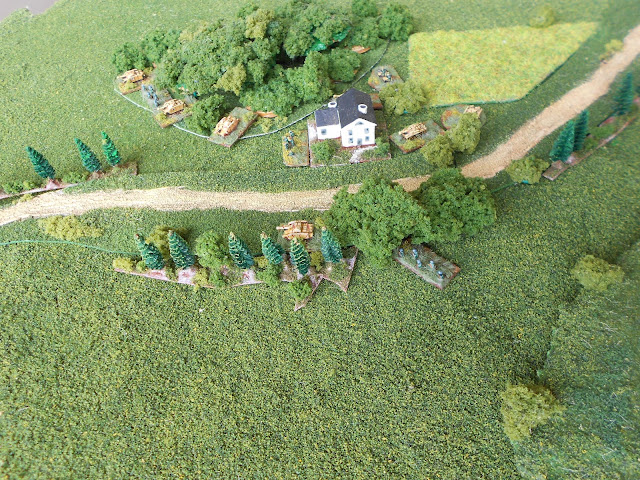 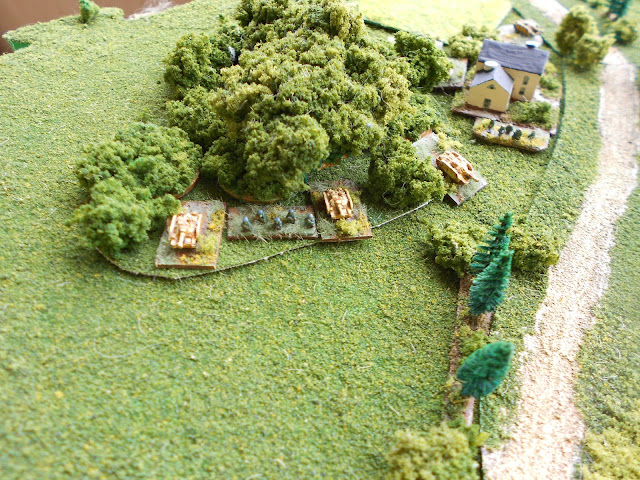 Posted by Thaddeus Gregory Blanchette at 7:49 AM No comments:

This is another of my holiday projects: a 1944 German kampfgruppe. This one is built around an infantry regiment with support from an assault gun brigade and a field artillery battalion..

I'm doing a new basing system for Blitzkrieg Commander here which is a half-company per stand. BKG works best at 1 HQ unit per 6-8 combat units and I enjoy using it to conduct division-sized actions on my coffee table. An infantry stand is thus about 50-100 troops - or half a company. Tanks represent 6-10 vehicles and crewed weapons around 3-5 weapons. 1mm = 10 meters and 10cm in the BKC rule book = 1 inch of table space.

Here we see the full array, with the two infantry battalions in line and the assault guns to the left, back:

Here we see the regimental support units: a CO, an extra HQ, a 75mm ATG, and an engineer stand. The KG also has an attached 88 FLAK gun and 2 additional 50mm ATGs, picked up from somewhere (they're stock OoB if I add another battalion and ditch the 120mm mortars to get an falschirmjaeger regiment). They're waiting on their horse-mounted recon unit, which should be done tomorrow (yes, I just noticed that I gorgot to flock the 75mm ATG...: 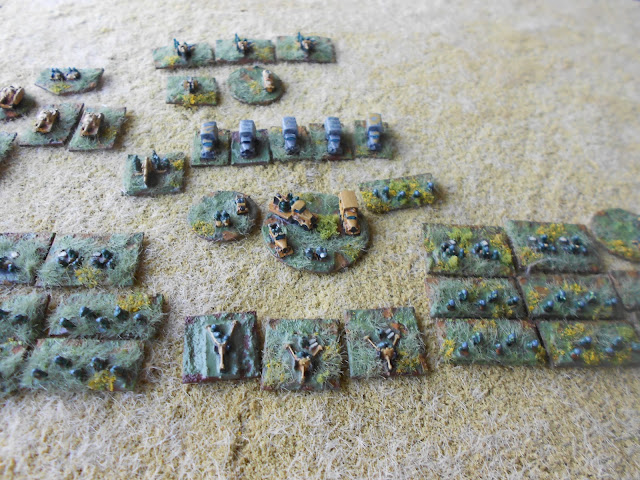 The assault gun brigade. These will get another two infantry units to make up the escort company. One of the company's armed with Stug III F8s while the other two companies have Stug III Gs. The brigade has been promised Stug 42s in place of its F8s, but these haven't arrived yet. An engineer and a motor-cycle mounted recon platoon accompany the HQ: 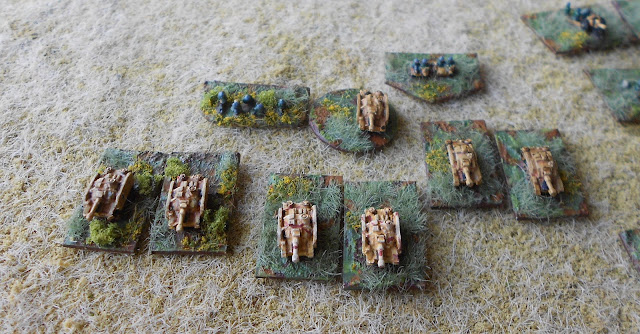 Finally, here's the artillery battalion, armed with 105mm cannons. They are accompanied by a halftrack-mounted FO and a 20mm quad anti-aircraft battery. 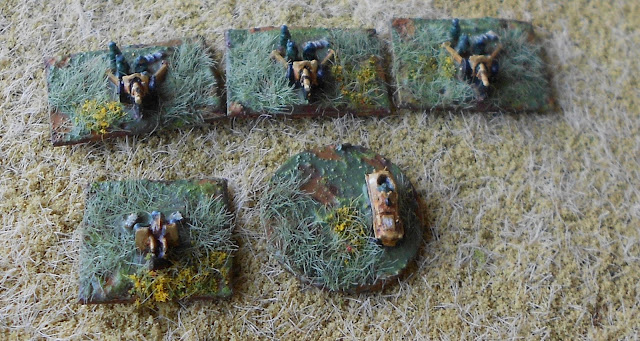 All figures are by O8, distributed to me with excellent service by Picoarmor.