The core of my French Napoleonic Army for Black Powder is FINALLY finished! I rebased it during the World Cup and painted up the last few units.

Here are some pictures: 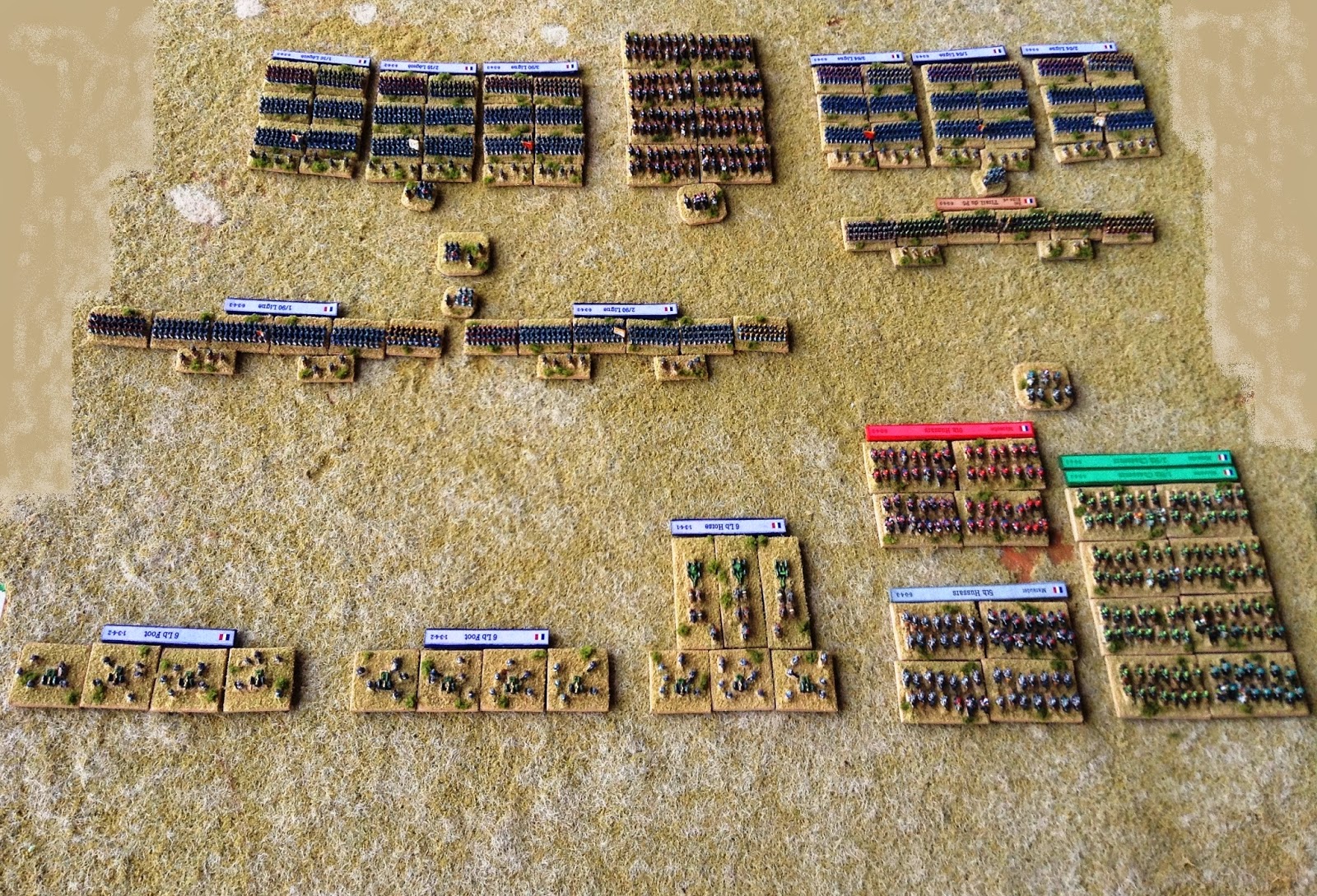 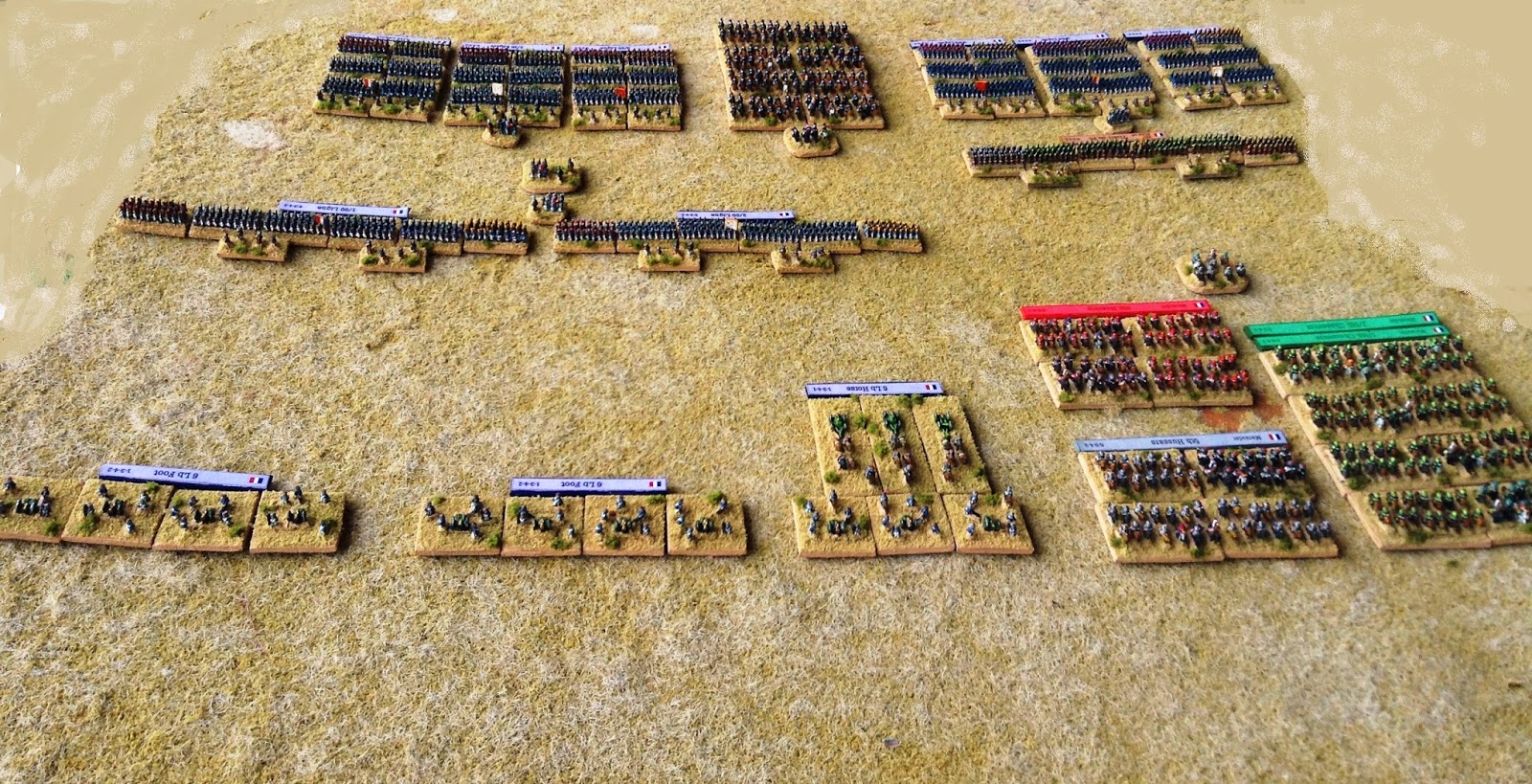 I learned  a lot doing these.

In the first place, as with all microscales, you need to exagerate your paint jobs and use the brightest colors possible: medium gray for black, bright crimson for red, bright blue for blue, etc.

I originally began painting far too dark and had to go back and touch up units.

Furthermore, I put a blue pom-pom on each infantry figures head (red and gold for grenadiers and voltiguers, respectively). I know that French infantry had color-coded pom-poms by company, but at this scale, you need something to catch the eye at arms distance. With their white surcoats, the French looked too indistinct from the Austrians. With a blue pom-pom added, however, the blue bleeds through to the eye, even at this distance. (Close up, they look a bt more like Bavarians, perhaps, and if I ever do that army, I am going to have to make them baby blue so that they contrast).

Finally, I orignally gave these figs a medium green flocked base. Bad idea: they didn't stand out enough. I thus went to fine yellow flocking with some light green coarse flocking tossed in as bushes and the result is as you see it. I am quite pleased with it.

What you are looking at here is some 80-90 dollars worth of Oddizial Army 1/600 scale figures, bought through the wonderful guys at Pico Armor. They took me a year to paint, but only because I went very slowly and rebased and repainted several times, trying to get the proper effect. 3mm is a new scale and needs new techniques when it comes to basing and painting. I hope to find time to write a painting and basing primer for Napoleonics later this year.

What we have on the board are:

Doing this same army in 28mm scale would cost around 600 dollars or more. Although it would be much more visibly impressive, it would take much more time to paint and a huge amount of room to play and store. This army fits in a cigar box, plays on my coffee table, and cost about 1/8th what a comparable 28mm force would cost.

Still to come for the French are:

As always, my "historical" gaming presumes that all this is going on in an alternate dimension "just next door": I don't strive for absolute accuracy, just reasonably plausible forces. This allows me to paint up forces which I probably shouldn't, were I to stick to stirctly historical OoBs.

When finished, my French force should allow me to "bathtub" any Napoleonic battle up to and including Leipzig 1813, at roughly 8:1 scale (i.e. every 8 battalions/squadrons are represented by one on the table top).

O8's new sci-fi miniatures allow us to play Ogre miniatures in 3mm! The only figure missing from the basic game so far is the non-mobile Howitzer, and you can use the Mobile Howitzer for that until something better comes along. 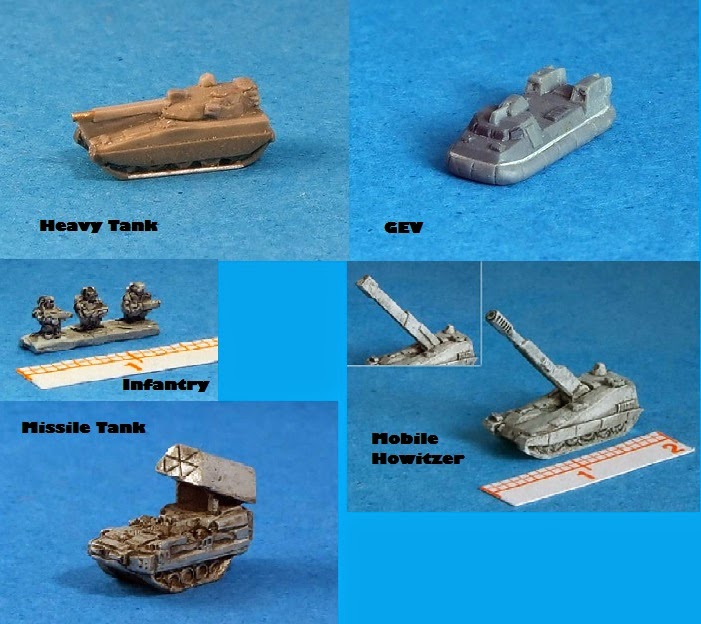 Posted by Thaddeus Gregory Blanchette at 8:05 AM 4 comments: