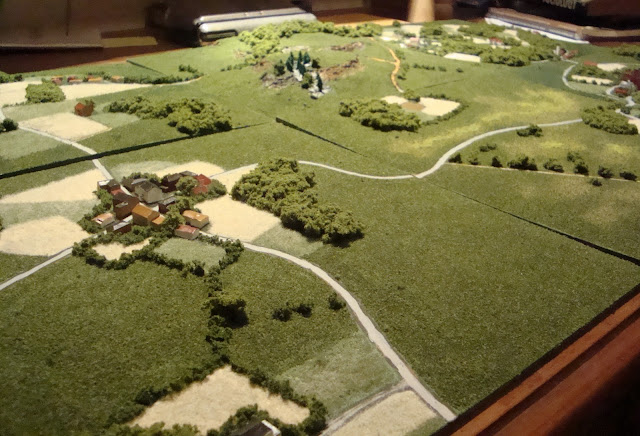 Inspired by Ana Paula's Christmas gift of a bunch of Microform 1/1200 scale buildings (which I've detailed here) and Depot de la Guerre's handcrafted terrain modules (reviewed here), I've decided to build my own terrain modules for my 1/600 and 1/900 (3 and 2mm) miniatures.

The ground scale in these things is nominally 1:10000 (or 1 centimeter equals 100 meters), which makes them useful for my 2mm centimeter scale Volley and Bayonet set up and my WWII company-level figs. However, they can also be easily scaled to 1:4000 (1 cm = 40 meters), which is what I play platoon-scale Cold War Commander at, most particularly my 3mm Blitzkrieg imagi-nation armies of Azurnerreich and Krasnynorad.

This was my first shot at producing "serious" modules, although you can see some earlier efforts for 2mm stuff on the 2mm Yahoo group (note that you must be a member to see them). This time, I made a concerted effort to keep everything in scale. I went for 1/1200 because it's been my experience that "scaling down" terrain a notch or two from the figure scale that will be used on it makes for a better-looking miniatures experience, especially in large battles (which, let's face it, is the main reason to game in 2 or 3mm).

I'll do a terrain tutorial later, if there's interest, but just give a basic rundown of what I did here.


First of all, I went to an art supply store and bought some 30cm x 30cm artists' paint boards. These come in two varieties in Brazil: chipboard and linoleum covered chipboard. Like an idiot, I bought the regular chipboard because, at 3 R$ (2USD) a shot they were half the price of the linoleum-covered ones. Obviously, if I'd gone the other route, I'd have much more warp-resistant boards, so that's what I will buy in the future.
As you can see in the photo above, some of the boards warped. I've been able to reflatten most of them by painting a mixture of glue and water on the backside of the boards, suspending the boards upsidedown on four paint bottles at the corners and setting a weight in the middle of the back of the board. Better, though, to not have the warping problem at all, so linoleum it is next time.
I wanted to make a variety of terrain types on geomorphic modules. I decided that placing streams on the boards would make them too busy, so later I'll build a few specific river and stream modules to slot in with these. My first six boards were (going from the upper righthand corner clockwise): 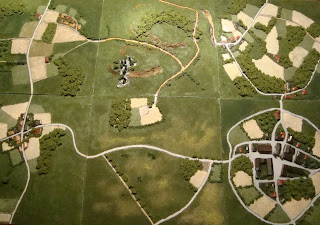 1) A wooded and hedged agricultural area.
2) A town.
3) An open, undeveloped area.
4 and 5) Small villages with fields and some woods.
6) A large hill.
Three other modules are currently awaiting completion and are not shown here: another large hill and two rolling hills, one with agriculture and one largely undeveloped.
The only major problem I had was with the hill, which I made with paper maché over styrofoam. First, it took a week to dry. Secondly, it shrunk quite a bit as it dried, leaving cracks and exposing the edges of the styrofoam core. I fudged this by painting them as steep slopes and the ultimate result is pretty good, if I do say so myself.

I'm having better luck making the rolling hills, which are smaller. These, I lay out on a thick plastic cutting board and then I stick them in the microwave for 15 minutes. Voilá! Instant hills to be glued down on the boards. I then use a bit of extra paper maché to smooth out the seems. Works pretty good so far.

For the basic modules, I first paint them all over forest green. I then paint on the roads as dark brown. I plot out where I want woods (painted dark green), fields (pained tan and in varying shades of green) and buildings (painted brown). I then use a selection of Woodland Scenics static grasses to flock the fields, followed by green and yellow flocking for the open areas (sometimes touched up with a hint of bright green static grass and dark green flocking). When that's all thoroughly dry, I place down clumps of coarse foilage in medium and dark green for trees, sometimes literally spruced up with a few of PicoArmor's pine trees, here and there. Building lots are then given a dusting of dark green flock and the buildings (which I have pre-painted) are glued down to them. After that, I detail building hedges and small clumps of trees here and there, fruit groves... whatever I think will be fun. Finally, the roads are painted in, grey or light tan, as the case may be. 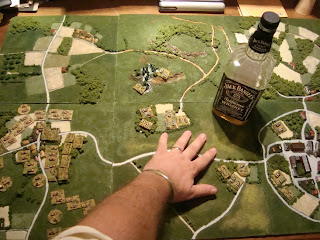 That's a Jack Daniels bottle and my hand, for scale. Six terrain modules give me a three foot by two foot set up which corresponds to your average 6x4 foot board at larger scales. Many people often quip "Why play with 3mm figures? It's like playing with grains of rice!" First of all, O8's figs are much more detailed than grains of rice. But more importantly, 3mm allows me to place a beautiful, full-fledged miniatures set up on a coffee table and still have room left over for markers, rules and dice. 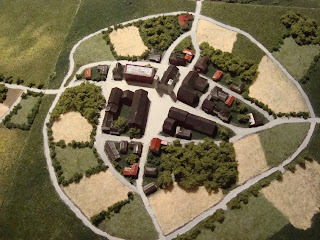 Lovely Picoburg. Note the kit-bashed cathedral, made from a Microform house and some plastic strips. I've decided to not overly detail the buildings as that could easily make the modules too busy and distract the eye away from thr miniatures. I've also tried to keep to a generic architectural style which could be used anywhere in Western Europe from the 18th to the 20th centuries. Here, there's only one building that kind of breaks that ruke and even then it doesn't do so ostentatiously. (There are a couple of ranch-style houses, too, but they can easily be glossed as lower-class dwellings). 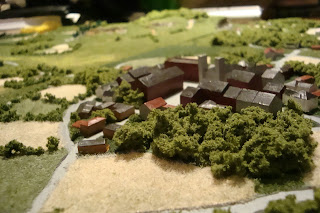 Looking over the rooftops of Picoburg to the Picoberg on the horizon. 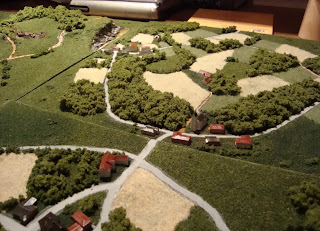 So how do the figures look on the new terrain? Pretty good, actually. For years I've been holding off building terrain modules because I've wanted to go with the drop-cloth and pastels method, putting terrain down and drawing around it so that it can be picked up if units occupy it. I've not liked the "infantry-on-top-of-the-woods" method I'd probably have to adopt if I used modules. After seeing Depot de La Guerre's suff, however, I realized that this was not such a big deal if the modules were to be at 1:10,000 scale.

See for yourselves. Here are some pictures of a Krasnynorad tank regiment forming up to attack a Azurrnereich Mechanized taskforce... 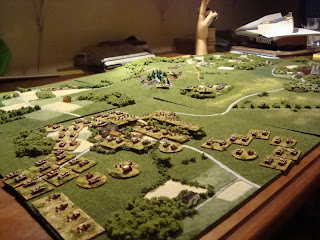 Big Red's 31st Tank Regiment forms battle order out of march columns. Two tank battalions flank Picoville, occupied by a motor rifle battalion, while a third tank battalion waits in reserve behind the village. A regiment of 122mm artillery is deployed to the right of the reserves. 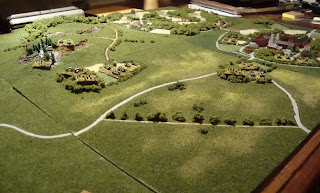 The Thin Blue Line. A reinforced combined arms team occupies the Picoberg and Pico Farms to the left while another team guards the approaches to Picoburg on the right. 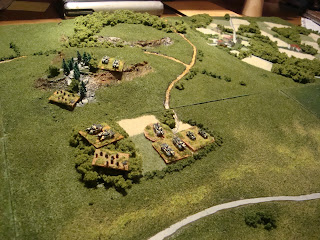 ...and a very Happy New Year to all you Lead Doesn't Bleed readers (all two dozen of you)!

I took a brief end-of-the-year sabatical in order to attend conferences and grade papers, so this will be the first post of the new year.

Lucky, lucky me: Da Wife bought me a passel of Microform 1/100 buildings for Christmas and they've arrived today!

As most readers of this blogknow, I generally play in 1/700 (or 3mm) scale, so I've wanted some appropriate buildings for quite some time now. Up to now, I've been using PicoArmor's monopoly buildings and these are fine, but they're also a bit too big for my tastes. Like many miniatures gamers, I prefer my terrain to be one scale step down from my figs.

Enter Microform Models, a company which specializes in castings for architects. Their 1/100 scale line is set to a model scale of 1/1200, which is perfect for 2 and 3mm figures (those of you who prefer more in-scale scenery will probably perfer Microform's 1/50 or 1/60 lines for 3mm).

Here are some pictures of the castings, set next to some O8 3mm WWII tanks and infantry and Picoarmor Monopoly buildings... 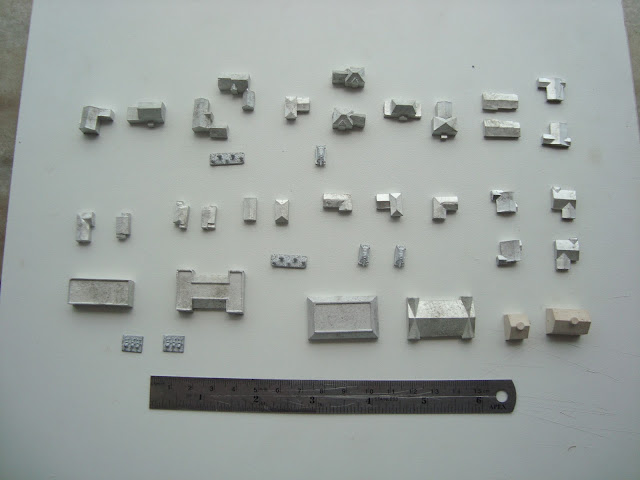 ....and from another angle: 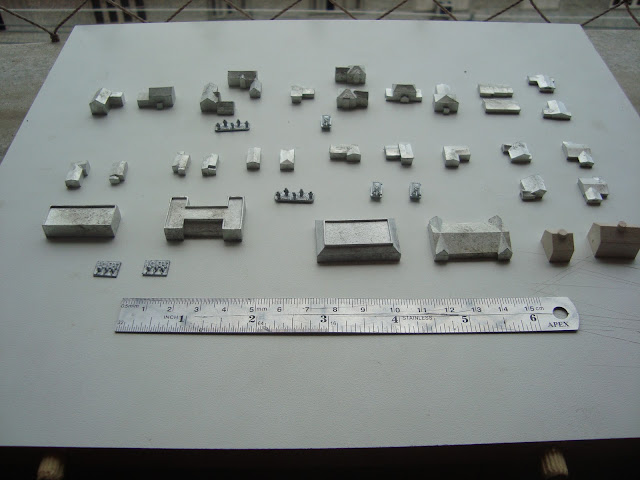 A﻿nd finally, here's a close-up, which should give an idea as to how these things scale against 3mm figures: 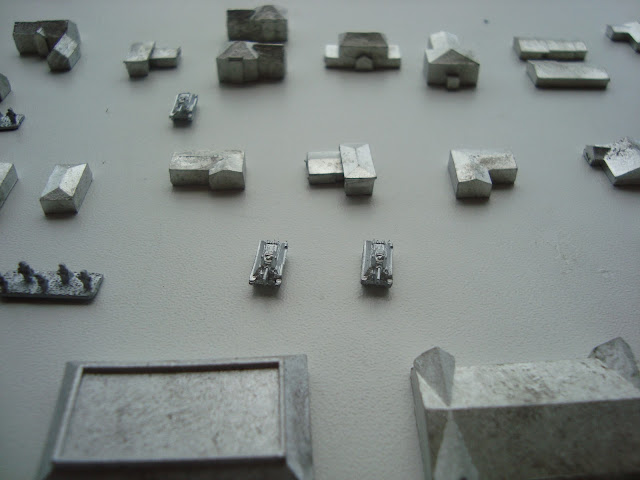