Here are some photos of my first planes for the Avalon Hill Blitzkrieg Project. All planes are 1:600 (3mm) models from Tumbling Dice, with markings from Dom's Decals.

First up, we have two flights of Blue F-100 Super Sabres. I thought the white paint scheme on these turned out rather nice. 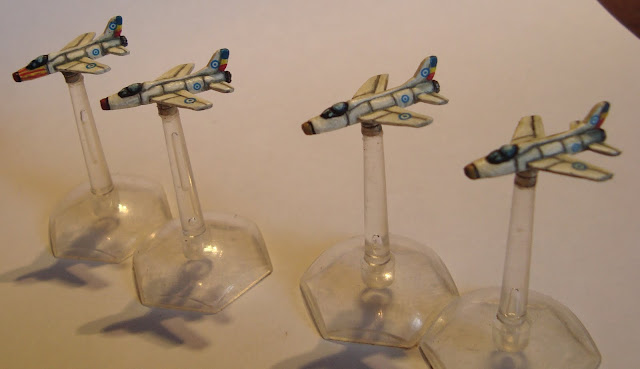 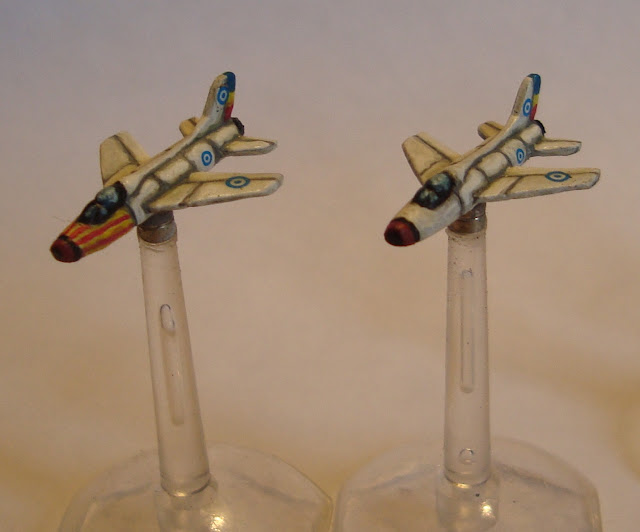 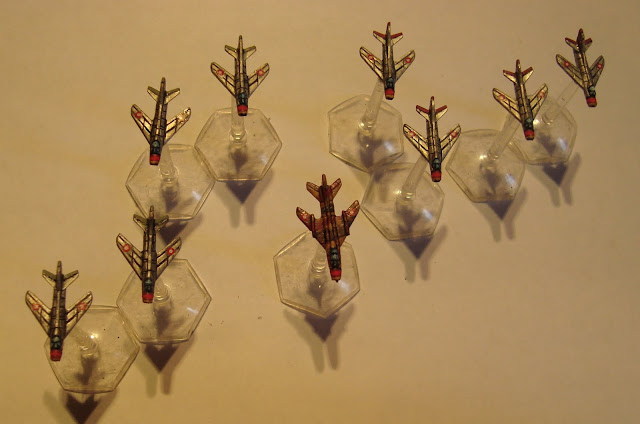 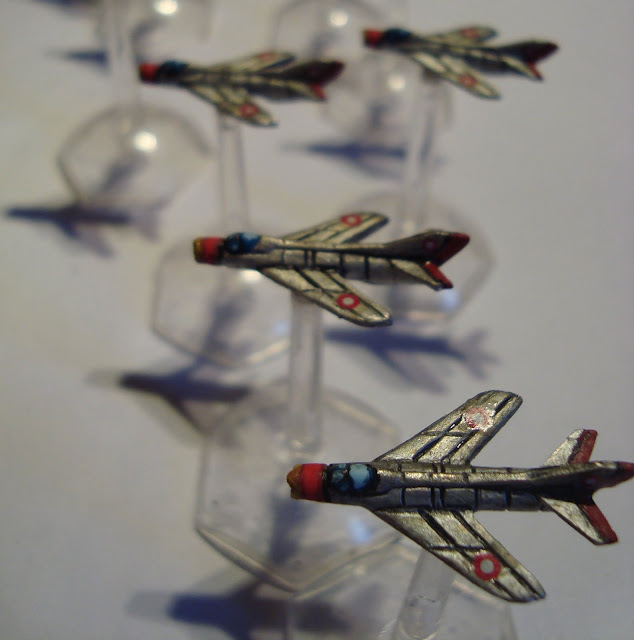 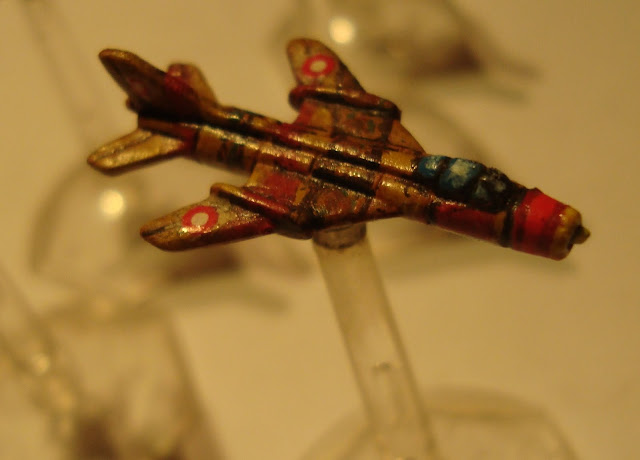 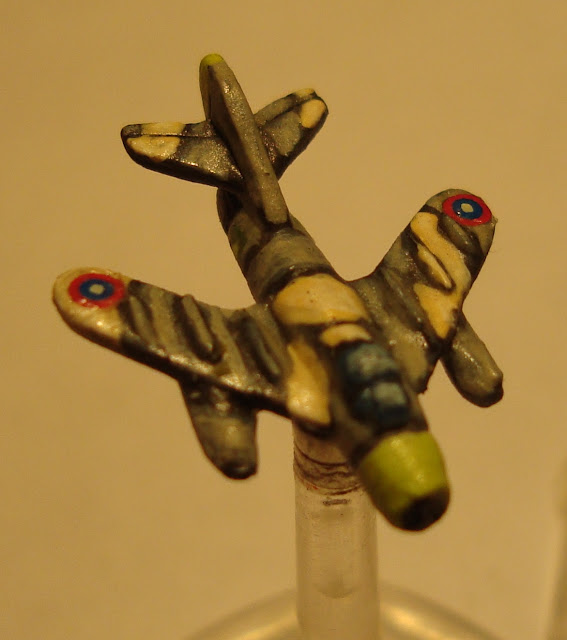 And, finally, a lone F-100 from a second Blue squadron, this one in a more "Luftwaffe 1946" style paint scheme: 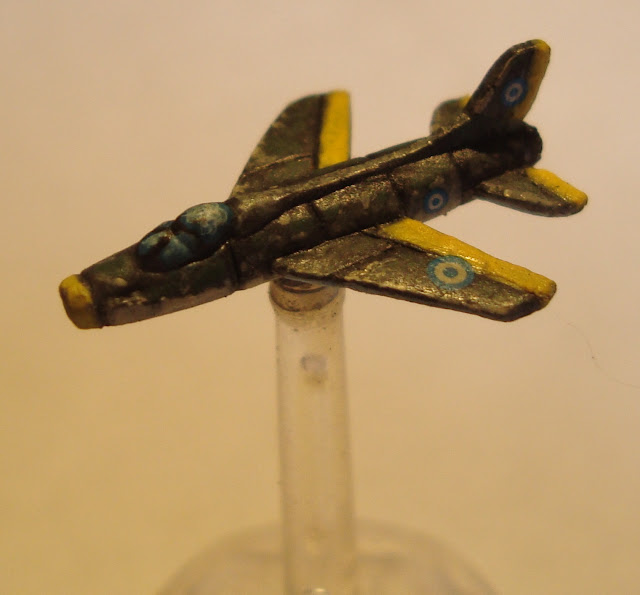 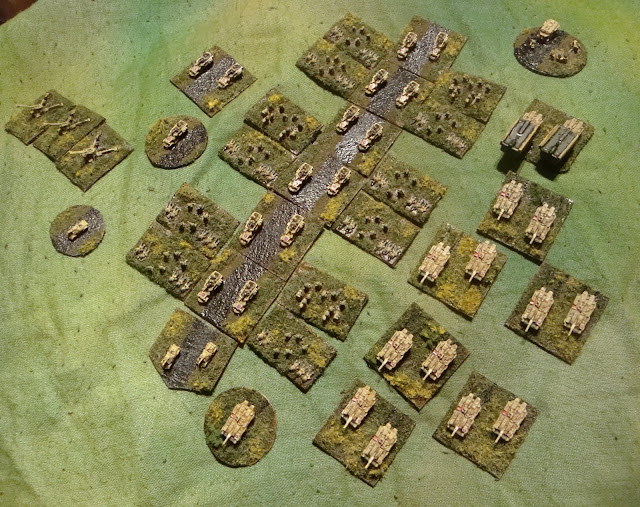 Over on the Specialist Publishing website (the publishers of the Commander series of rule), we’ve been having a debate as to whether or not 3mms are more cost effective than 6mm figures.


I’ve repeatedly sustained that they are, but some posters counter that if one places four vehicle castings to a base (in order to model platoons at 1:1 scale), the costs come out at more-or-less the same.

I disagree with this view.

First of all, a key consideration for these smaller scales is play area: typically, one wants to be able to play in about a quarter as much space as at 10-15mm (with a 3x2 foot table and half range and movement values being the norm). Basing four 3mm castings per base means one has to use 10mm-sized bases and, consequently, one gains no space advantage.

Secondly, a very satisfactory “mass” effect can be had using 6mm base sizes and doubling the number of figures used to 10 infantry castings or 2 vehicle castings per stand (weapons stay at 1 per stand, but use infantry-sized (half-sized) stands).

One of the great advantages of this sort of basing is that you can buy armies very cheaply and prepare them for combat very quickly. This allows you to build “marginal” projects – say the 1930s Chaco War, or my Colombia/Venezuela confrontation – without breaking the bank or taking much time away from other, more dear, projects. “Cigar box” armies of this type are fun to collect, paint and play and allow you more table time per hobby buck.

So I wanted to prove that one can build a 2000 point battlegroup for Cold War Commander on a budget of 20 dollars. This force will be a neutral “third party” army for my Blitzkrieg miniatures game project. This is what I bought:

I picked up O8’s brand-spanking new Strv-103s because I’ve always admired this tank. Though technically, it’s a bit advanced for the time period I’m modeling (1950-1960), it’s not ridiculously so, having been projected in the 1950s. In my campaign, however, it’s main gun will be down-graded to 90mm and it won’t have stabilization in order to make it inferior to the Blue Centurions (which are supposed to be the most high tech tanks on the Continent).

To make the units, I put two vehicles on each 1’x 1’ stand. Strv-103s are Skorpions, Daimlers (or any convenient armored car) are Foxes and the MiG17s are Goshawks (1 plane per stand). I put ten infantry figures on each 1’ x ½’ infantry stand and used the heavy weapons to make the recoilless rifle units. I then used the HQ pack units and leftover Foxes, Skorpions and halftracks to build the command units. Guns are based on per infantry base. For the mortar halftrack, I simply modified on of the regular M-3s (O8 does make a mortar M3, but I didn’t want to buy a pack’s worth). Total CWC cost for the project to date:

Optionally, I could keep the MiGs and 155mm Artillery off-board (which is perfectly OK in CWC, as they don’t ever maneuver on the board) and spend another 3.50 on a second pack of Strv-103s. This brings me up to about 20 USD exactly (or 21.60 if I were to buy it all) and, thinning out some command stands to form a second Fox Recon unit, I can field an additional:

… for a total force of 2620 points. Chuck out the MiGs and FAC and add some artillery ammo and I can easily get down to 2500 points.

Now, how does this compare, cost-wise, to a similar 6mm army?

If we presume that you will buy GHQ miniatures (the only real equivalent to O8’s level of detail at the 6mm level), you’ll be spending about 2 USD per stand, given that a pack of five vehicles will run you 9.95 USD. This means you’ll pay about 74.00 USD for the 37 stands of the basic army and another 18 dollars for the optional stands.

Painting and basing the force
In the unit pictured below, I still need to buy a second pack of Strv-103s and I need to paint up my MiG-17s. Also, I swapped out the Daimlers for some spare Italian AB-41s that I had lying around, swapped in some Italian 20mm AAA canons for the Lt. AA tanks and used some extra Russian infantry to beef up the heavy weapons stands. Other than that, everything is pretty much as described above. It took me about 4 hours of work to base and paint this battlegroup.

Because this is a fantasy unit, I can paint it up anyway I like. It’s meant to be a generic neutral unit for my Blitzkrieg set up, so the national markings are WWI American roundels, which feature both red and blue.

I decided to paint these up according to the same general scheme as my Italian WWII units, but made the base much darker in order to bring the units out. Helmets and other details on the infantry are also light green. Again, I painted red and white flashes on the tanks in order to make them jump out just that much more from the background.

This time I went for a spring effect on the bases. I flocked with Woodland Scenics Medium Green over dark brown painted bases. I then sprinkled some light green static grass over parts of the base where glue had seeped through. After drying, I lightly brushed the top of some of the thicker static grass patches with glue and dipped them in Gale Force 9’s summer flocking. The effect at this scale gives flowering bushes. Finally, I added some dark green coarse flocking here and there for regular bushes. The end effect is quite nice, if a bit festive. 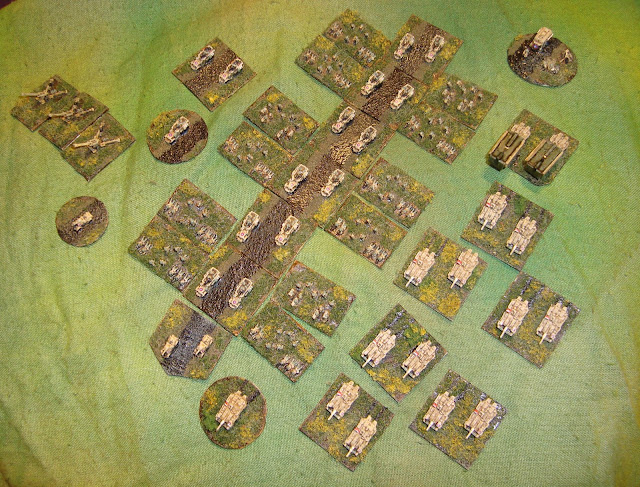 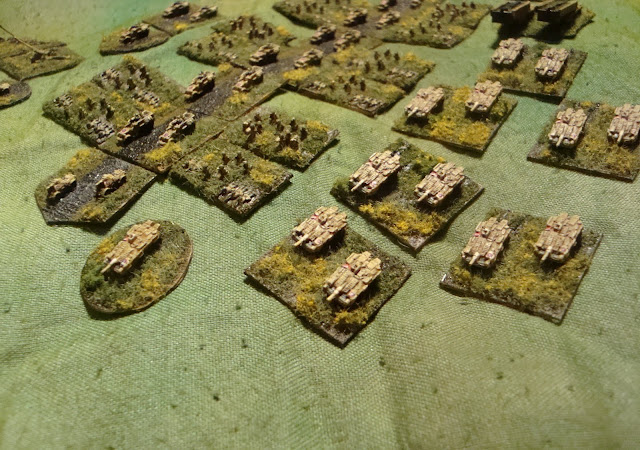 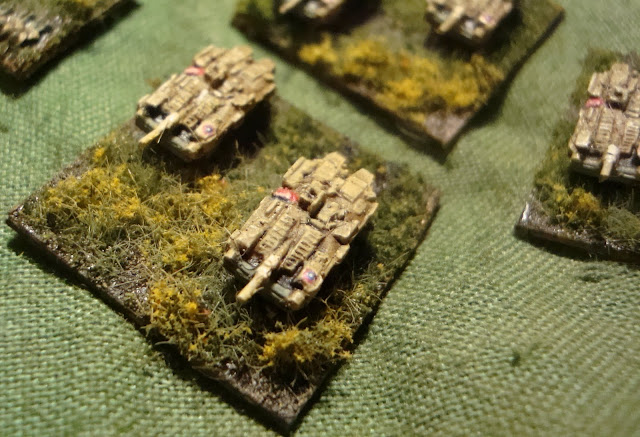 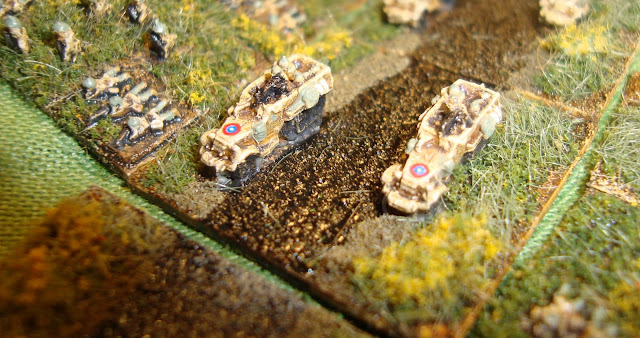 Mechanized Infantry - bad shot, I know.
I realize that these photos are not the best: light quality sucked when I took the shots. I'll try to post some better pictures as soon as I can. Meanwhile, here are the CWC stats: 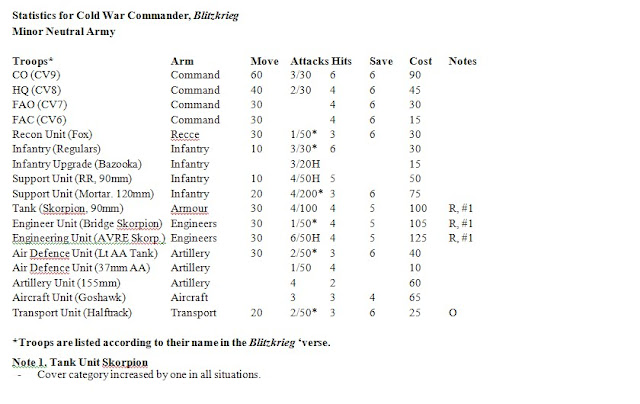