As many people now know, Magister Militum has launched a series of new 3mm lines:Ancients, Pike and Shot and early 18th century. They have massively expanded the options for 3mm gaming overnight and, curiously, haven't really bothered to publicize their new line.

I've been waiting for something like this for some time now, as I´ve always wanted to play Sam Mustafa's Maurice in 3mm. So when I heard about the new lines, I squeed more than a Japanese schoolgirl at a Cheap Trick concert. I ordered a bunch of 18 century stuff immediately.

I bought MM's musketeers, cavalry and artillery in tricornes, because I wanted to do some rather generic 18th century imaginations. Also available are pikes in tricornes and 17th century cavalry, which can still work as early 18th century heavy cavalry. Like many people who are probably reading this, I wanted to see the figures first hand before buying a lot of them. In particular, I wanted to see how they compared to Oddzial Osmy's every-expanding and excellent lines of 3mm miniatures. So I bought three packs of infantry, two of cavalry and one of artillery.

Luckily, the ever-gentlemanly Time Porter was on his way down to Rio de Janeiro on business and agreed to carry the figs for me. This is the second time Tim has done this and I really owe him something cool, because he's had to deal with the Brazilian postal system twice now. Thank you very, very much Tim! This has been a great present!

The good, the bad and the ugly

The good news is that the figures are perfectly acceptable. This worried me, as 3mm is a tricky scale to do. Marcin at O8 gets around most of the problems by casting in a hard zinc and aluminium alloy, which holds detail like no one's business. Unfortunately, it also has very little give and will break rather than bend.

MM has decided to cast in good ´ol lead alloy. They've gotten around the problems this presents by making their figures noticeably more chunky than O8´s. This is not necessarily a bad thing, especially because the soft metal means they can be easily modified – something one can´t say for O8´s miniatures. The pikes, of course, are ridiculously thick, but if you are playing in micro- and picoscales, you already know that some sacrifices must be made. If you´re really anal-retentive, you can hack off MM´s pikes quite easily and substitute piano wire. Sure, it'd be a hassle to do a whole pike block or phalanx like this, but it could be done!

The bad news is that MM's figures are uneven in quality. The infantry is quite good, if chunky: 8 figures on a 20mm frontage, with no space between the figures versus O8's 10 figures on the same frontage, with, if anything, too much space between the figures. I originally didn´t like the cavalry much, but they´ve grown on me as I´ve painted them. The one problem is that their heads seem far too big. Perhaps this is due to the (understandable) desire to cast them with identifiable tricornes, but the best adjective for the cavalry is still “bobbleheaded”.

The artillery, however, is a crying shame. The cannon has no carriage, only a gun tube with two wheels attached to it. In fact, the whole thing looks like some sort of pornographic parody of a cannon, or perhaps a toy cannon. In any case, it is unacceptable. I don´t know why MM decided to go with this cast as it's not like it's difficult to model cannons at this scale. Furthermore, O8´s cannon won´t look good with MM's gunners, who also suffer from the same bobbleheadedness as the cavalry. Fortunately, one doesn´t need many artillery pieces for a game of Maurice and, because of MM's decision to go with a soft alloy, the artillery is easily modified. I sliced the wheels off of mine, stuck in some square plastic rod bits where the wheels used to be, then sliced off two thin sections of plastic tubing for new wheels. The result is perfectly acceptable on the tabletop and even looks OK close-up. 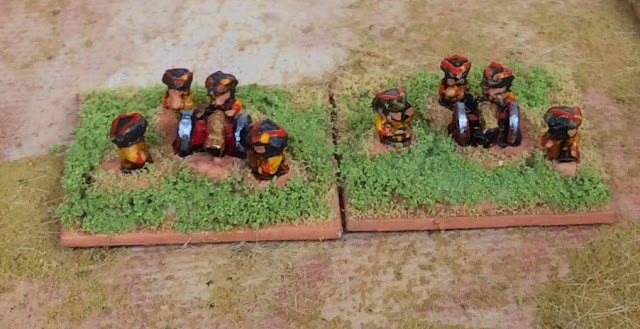 Be advised, however, that if you buy MM's artillery, you'll get this.

It looks even worse in real life than it does in this picture. All the doubts you have about that figure? They are all perfectly true. So if you don't want to mod your own cannons and don't want semi-pornographic artillery, you might want to wait until O8 releases 18th century figures or until MM recasts its crap artillery.

Artillery aside, these figures paint up a treat. As the infantry is strip-mounted, you won´t be able to cut it apart, as you can do with O8's stuff, in order to vary your formations. I originally was going to put down three strips per base, but it looked far too clunky with Maurice's 4 stand infantry units. I've thus gone 2 strips per base and I am pleased with the result. The flags are, of course, mounted on telephone poles and far too thick. They are easily clipped off and replaced with paper flags, as you see here. My flags are hand painted, but I might replace them with some laser-printed flags at some point in the future.

One problem the infantry has (or maybe it's not a problem: YMMV): the figures are jammed together, but there's a millimeter of space on each end of the strip. If you put these on 20mm wide bases, there will be gaps between each infantry stand. You can, of course, file the base ends down flush with the soldiers and base on 18mm squares. This would be no problem for Maurice,  which measures everything in base-widths, but other rules might suffer.

As you can see in the photos, I didn't file my bases down, so there are gaps between the stands.

There's good news and bad news here as well. The bad news is that because of the figure style, it will be somewhat jarring for you to place O8 heavy infantry or cavalry on the same bases or in the same units as MM's stuff. However, they look perfectly fine when based separately, especially if one uses O8's stuff for irregular or light troops.

MM says they will have hussars and grenadiers along presently. I don't think O8's stuff would make good grenadier substitutes, but several of their figures do just fine for light troops.

Here are some ACW Zouaves serving as generic Balkans or Turk-style light troops:

Here are busby-equipped chasseurs a cheval, doing excellent work as 18th century hussars. You can compare them with the bobbleheaded MM cavalry behind them. Not an outrageous difference: 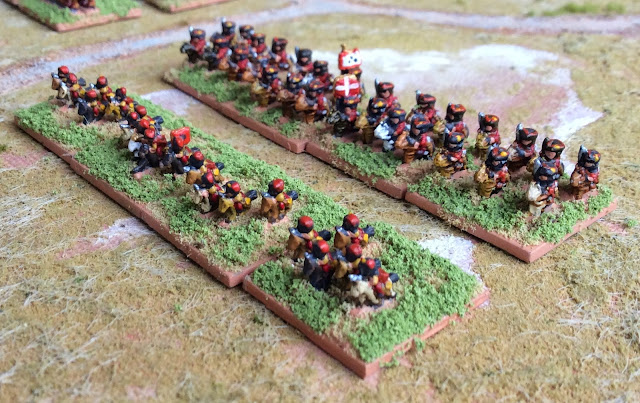 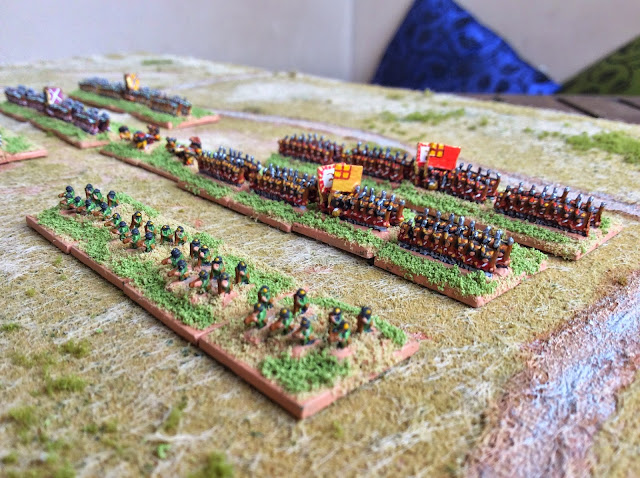 MM's bases are much thicker than O8's, so I found it necessary to slip in a piece of card under the latter's figures in order to bring their heads' level with the former's. As you can see, O8's stuff is much more delicate than MM's. The cavalry, in particular, is riding horses that are noticeably smaller. This is fine, however, if you want to model light cavalry. Not so good if you were hoping to use O8's stuff for other types of heavy cavalry.

If, like me, you want to play 18th century warfare right now in 3mm and don't mind doing a bit of hacking at the artillery, then place an order with Magister Militum. If you prefer Oddzial Osmy's delicate style (sometimes far too delicate – half of the Zouaves popped off their bases while I was clipping them) and very fine detail, or if the thought of modifying artillery pieces turns your stomach, then you might want to wait until Marcin's crew bring out their own 18th century stuff.

I myself am perfectly happy with my purchase and will be buying MM's grenadiers and other offerings as soon as they come out. 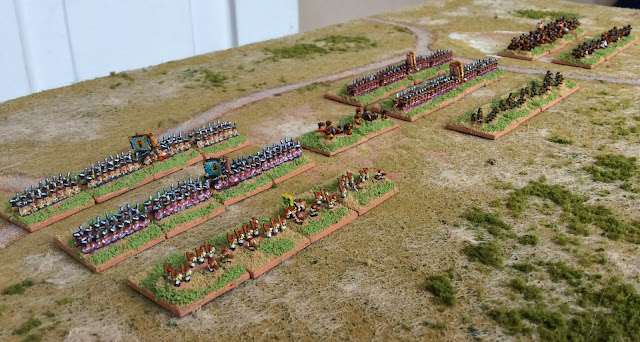 The initial regiments of my two imaginations: Saxe-Tübbio and Biche-Pliese. 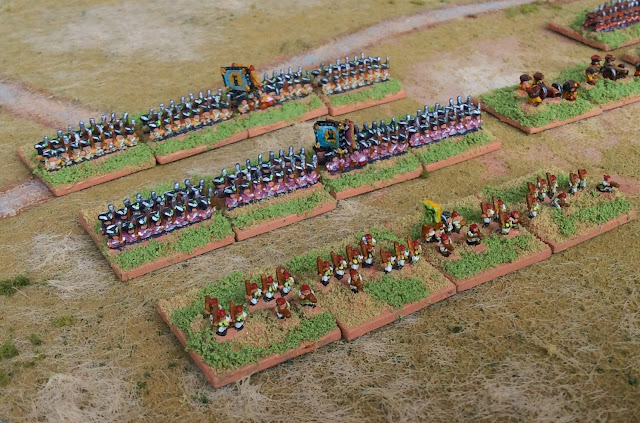 The infantry of Landgravine Elza Pappen, of Biche-Pliese 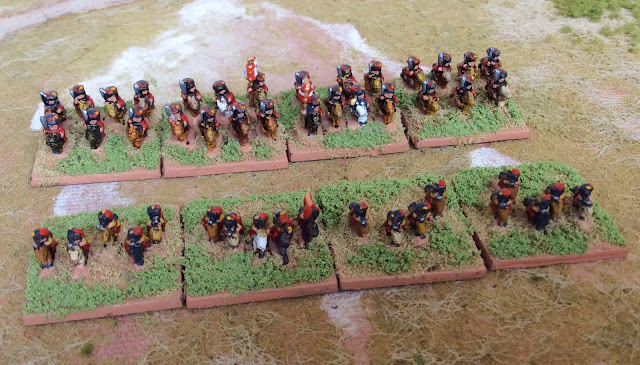 Two of Herzogin Heiline's regiments. Note that the stands are slightly less than 20mm wide. This means you'll have to cut your bases to 18-19mm if you want an unbroken line of infantry.
Posted by Thaddeus Gregory Blanchette at 1:14 PM 52 comments: