Well, here's Company A of the First Regiment of the New Vistula Legion, deployed on Smade's World. You see them here with a squadron of the 24th Uhlans, along with the attack component of the regimental air company and a flight of ground support aerospace attack craft.

(Also in the pictures, one can see my first terrain module done up especially for Smade's World. It's based on a 60cm x 30cm pre-framed painter's canvas, with expansion-foam hills and scratch-built buildings. These terrain modules will be the subject of a future post when I get a couple more of them made.)

These troops are 3mm modern and sci-fi figures from a variety of manufacturers, based for playing Future War Commander at platoon scale. FWC players will wonder why each platoon has two stands instead of the one which is the norm for platooon scale. This is due to the fact that the NVLs platoons are heavily over-manned by Human Sphere standards. Most infantry squads have 6-8 ground soldiers, for example, while the NVL's have 12. Likewise, NVL's vehicular platoons contain 5 vehicles instead of the normal 3, while its artillery batteries have 6 btubes instead of 4.

These large units allow the NVL to deploy a combat-capable force off-world for extended periods of time without replacements. 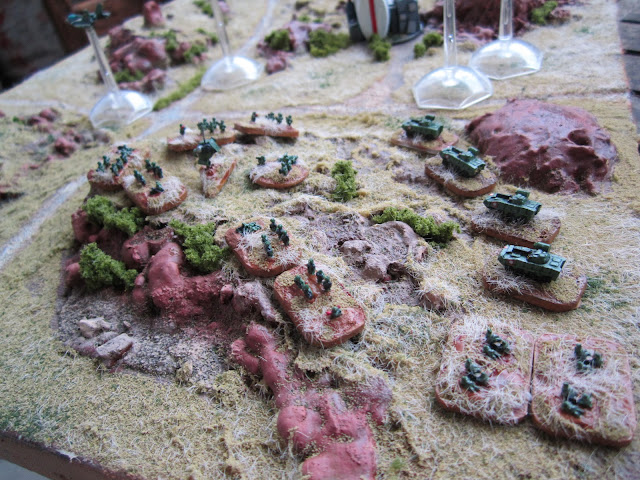 Here's the company, deployed to defend a ridge. The Wolverine II wheeled APCs are stationed behind the ridge, able to offer smart missile support via the target designators mounted in the company's recon drones (seen atop the ridge, left of center).

Alongside the APCs are the 6 tubes of the company's mortar battery. All the troops in this photo come from Oddzial Osmy via Pico Armor in the U.S. The foot soldiers are modern Soviet infantry and the APCs are Polish Rosomak APCs. I added a smart missile launcher to the Rosomak's turret with a bit of PVC tubing I had lying about. The drone, of course, is hand made. 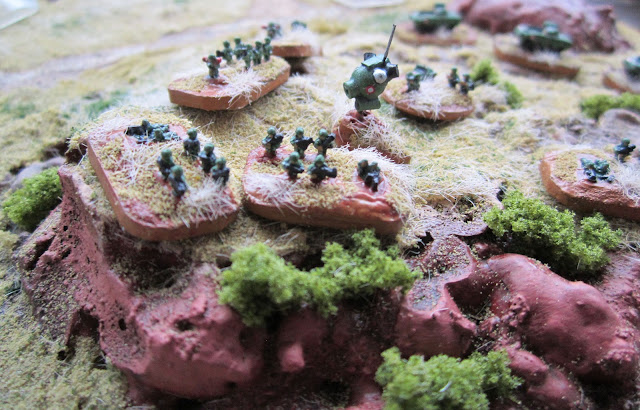 Here's a close-up view of the center of the company's position. Each stand represents about 25 men in 3mm scale and two stands make up a platoon. This shot also shows you the recon drone, with the Wolverine IIs far in the background. 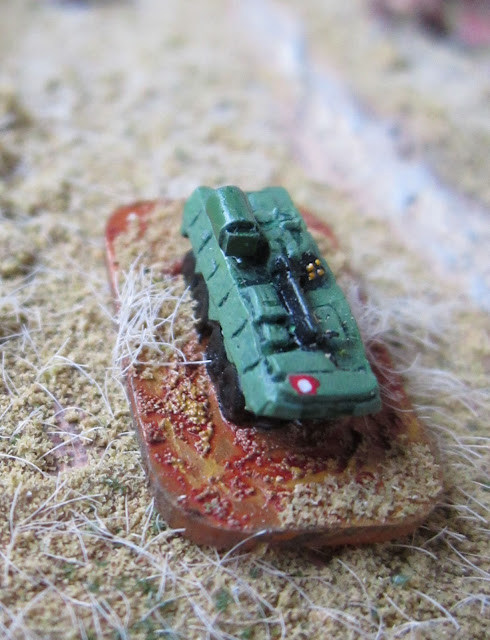 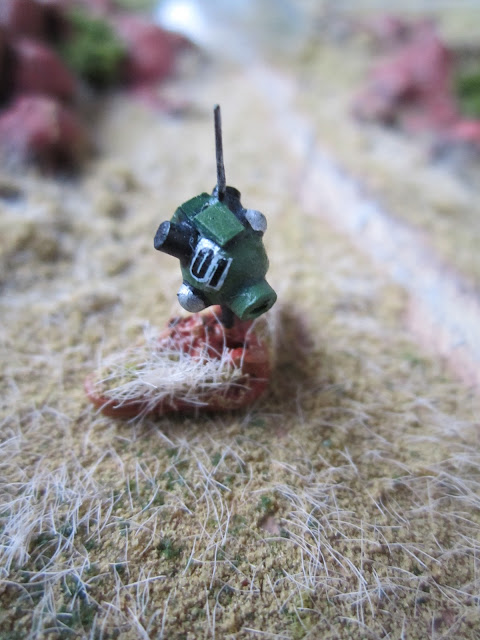 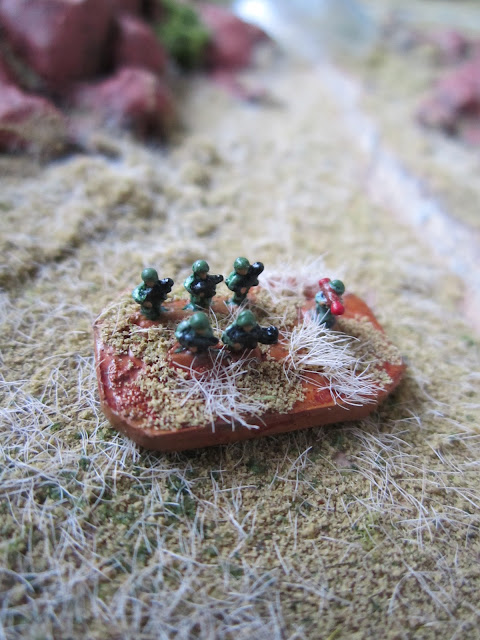 A close-up of the Wolverine II, drone and infantry. As I mentioned above, the APC has been customized by the addition of a smart missile launcher, seen here to the left of its turret. 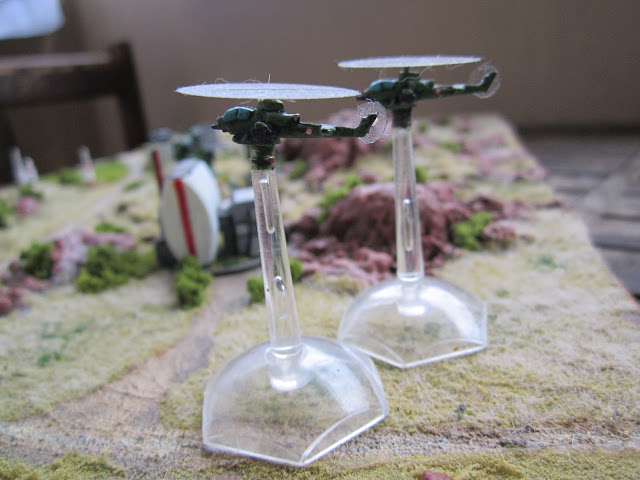 Here is half the Regiment's air company (the other half is made up of heavy transport helicopters). Yes, I see the little fuzzies stuck to the bottom of those rotor disks. A couple of years ago, O8 moved to  "stick-on" rotors and the residual glue attracts dust. I'm going to need to clean them with a cue-tip. Would alchohol work, though? I don't want to use acetone for fear of desolving the rotors themselves. 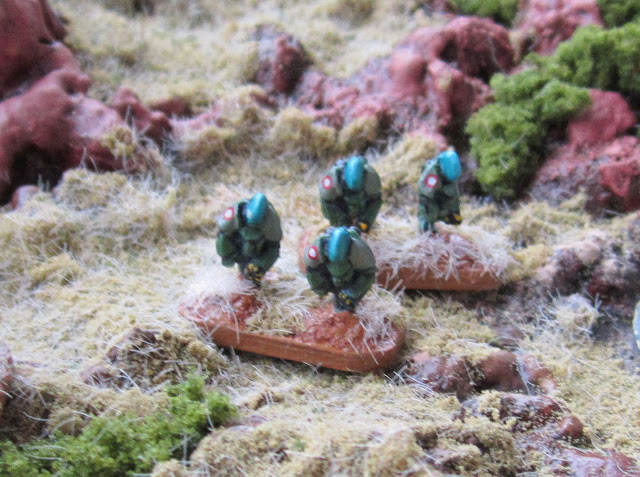 The NVL is organized as a light, star-mobile force and thus has no organic heavy armor resources. AFVs are limited to the Wolverine IIs and the armored cars of the Light Attack company (not pictured here - one vehicle still needs to be painted up). Each regiment does have a heavy power armor platoon attached to its headquarters company, however. This can be seen in the picture above. 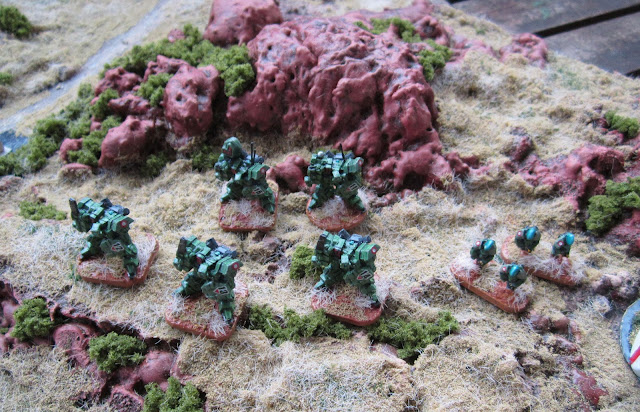 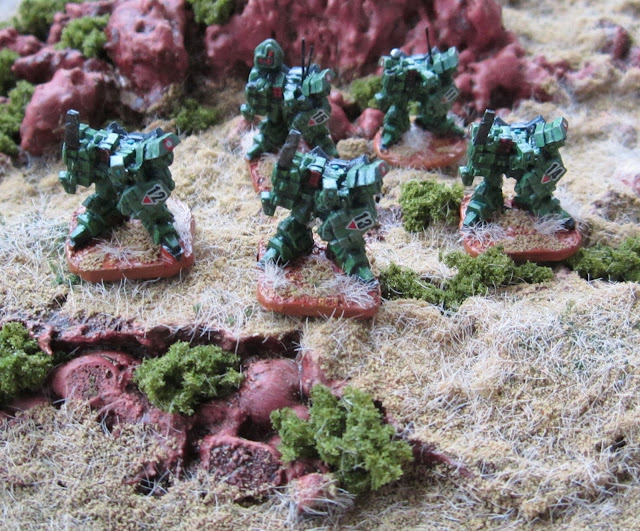 When circumstances permit, the NVL deploys with units cross-attached from regular military formations. Here we see a squadron of the 24th Uhlans Mecha Regiment holding the infantry company's flank. It is made up of three line troops, a heavy support troop and a headquarters troop (farthest back, on a round base).

The figures here are from Dream Pod 9's "Fleet Scale" line and are Terran Gears (which, unfortunately, don't seem to be available anymore). This figure has a problem in that the barrel of its rifle (the silver bit on the left side of the figure here) is too thin and often snaps off. I "fixed" that by making the support and command mecha carry "carbines". The support mech has a bit attached to its shoulder from a Games Workshop Tau pack. If I ever do the entire 24th Regiment, this unit will probably be remounted as the regimental commander, as I only have the one bit. I'll have to come up with a different solution for the support troops. The command mecha is kitbashed by having an EW dome (a small bead, actually) glued to its right shoulder. 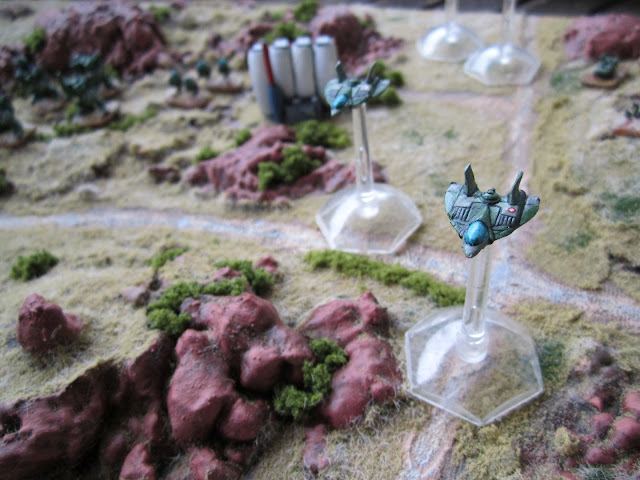 Finally, here's a flight from the attached 8th Tactical Aviation squadron, making a recon run ahead of the task force's position. These are Slayer micro-fighters from Iron Wind Metals. They scale perfectly to 1/600.


So that's it so far. I have most of the Light Attack company and the other two Light Mechanized Infantry companies painted, as well as the supporting units, but I need to kit-bash more drones and a few more mortar vehicles. Hopefully I'll have all of this up soon!

Present givers: why you no buy what I like? 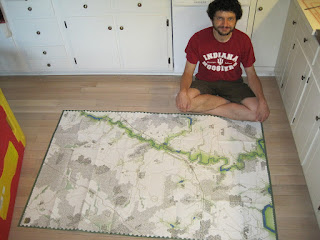 Here's something that's got me thinking after seeing this picture this morning...

Since I was a kid, all I've really wanted for gifts are wargames and books. That's it. Everyone who is or has been my friend, relative, wife, or lover knows this.

And yet do I ever get games or books for birthday or Christmas presents? Books, occasionally. But wargames? Never.

It seems to me this is a mark of how deep the gaming geek stigma goes.

Don't tell me it's because I have an "unhealthy fixation" with games. My dad has an unhealthy fixation with golf and he gets golf presents. My cousin has an unhealthy fixation with animé and gets animé-related presents. Most of my male relatives wouldn't dream of missing a Packers game and they get Packers presents all the time. In fact, I'd be willing to lay down good money that at least half of my male relatives spend far more time, each week, watching televised sports than I do in gaming-related activities. And women, before you get self-righteous, most of you spend more time watching soap operas than I do playing games (if you are Brazilians, at least). PLEASE, bull me no shit about "obsessive hobbies", mmm'kay? Especially when you're busy buying Aunt So-and-so her hundred and umpeenth cookbook.

But I can count the number of times I've received a board wargame as a present on half the fingers of one hand.

It CAN'T be because they are too hard to find, not in today's internet-dominated world. And it can't be because people "don't know what I'd like". People insist on giving me clothes and most of them I'll never wear, but that doesn't stop the clothes buyers. Hell, it'd be far EASIER to buy me a wargame than any other gift: simply go into your friendly local gamestore and ask the nice woman behind the counter what wargames are hot this season and 9 out of 10 times you'll get me something I don't have and would be interested in.

Furthermore, unlike clothes, I actually have a use for wargames I wouldn't buy myself. I ENJOY reading gaming systems and seeing how they work, even if the game topic itself doesn't interest me. Like clothes, I can always take a real stinker or a duplicate purchase back to the shop for exchange credit. Also, like books, secondhand wargames are much cheaper and just as useful as a new version.

But no one ever, ever, ever buys me games! And it would be so easy and so simple, as well as being the perfect gift!

Why did that picture get me thinking? The man in that photo is Italian game reviewer MarcoArnaudo. Note how he is a simple, normal looking gentleman and not an overweight, slobbering denizen of momma's basement. Marco, like me, is a university professor. He is married and has socially acceptable hygene habits. He hardly ever kidnaps mailmen for secret genetics experiments or hands out poison candy to the kiddies at Halloween.

The game in front of Marco is the classic "La Bataille de la Moscowa", first published in the 1970s, a game that I have wanted in my collection ever since I was 13 years old. I never buy it for myself, however, because it's a "monster game" and I don't spend cash on games which I'll have little chance to play for lack of space. But I want it, want it, want it, just the same.

Marco got the game as a birthday gift. Look how satisfied he is! That's how satisfied I'd be, 90% of the time, with almost any gift that is wargame related. And yet, in spite of the fact that literally everyone who knows me knows about this, my "obsession", I have almost never received a game as a gift. In fact, looking back on it, the only person I can ever think of who's ever bought me a wargame is my ex-wife, Katinha. (Mentira: my Uncle Jim once bought me some miniatures rules when I was 10.)

So what is it, people? Is my hobby just "too strange"? Is it "too infantile"? More than watching a bunch of grown men slamming their brains into early Alzheimers on the football field three times weekly...? Is it just too geeky? More than golf, for chrissake?

This is a nit I'm picking, but it really fucking bothers me. I put a lot of thought into the gifts that I give people, when I can give gifts (even though I probably miss as often as I hit). But in spite of the fact that I am literally the easiest person in the world to buy gifts for, no one in a rush to get me something, anything ever twigs on the obvious.

Now, I'm not saying that I haven't received many FANTASTIC gifts over the years: I have indeed! But, again, these were usually gifts by people who put some thought into what I need or want. Im also not saying I deserve gifts: I have too much crap as it is.

What bums me out, however, are the folks who insist on giving me presents, don't know what to get and buy any old thing almost at random. They usually spend far more money on this useless, joyless tchotcke than they would on a wargame, even when they KNOW FULL WELL what my obsessive hobby is. There are 10 dollar wargames out there, folks! You can't even buy a pack of tube socks these days for 10 dollars! And yet I receive tube socks in abundance at gift-giving times.

So let's knock it off with the socially acceptable snobbery, OK? Being a wargamer is no less or more a "disturbing" hobby than being a football fan and, as men the world over will attest to, no one has ever had any problem buying Dad, Hubby, or Brother a new Manchetser United jersey. I'm not asking you to enjoy my hobby - I probably wouldn't enjoy yours. But if you can't think of what to give me next Christmas or birthday and you really feel that you need to get me something, why not pop on over to Boardgamegeek.com, look at their "wargames" section and order me a used copy of whatever's 5th on their "top ten" list?

I GUARANTEE I'll appreciate more than the tube socks.
Posted by Thaddeus Gregory Blanchette at 9:37 AM 7 comments: