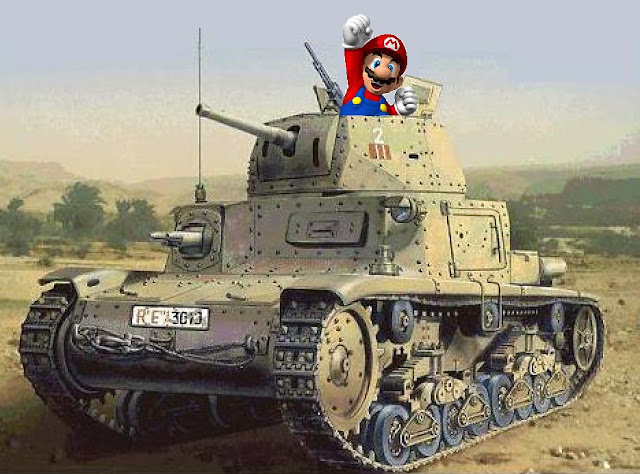 Go Rams!
Figuring out how to portray the 132nd Ariete Armored Divisions takes some thought. Though the unit was one of the major combat units in the Axis forces in Africa, it's relatively difficult to find clear order of battle information for it.
It's universally agreed that the Division's two major front-line combat units were the 32nd Tank Regiment and the 8th Bersaglieri Regiment, but it's somewhat harder to discover what was the exact composition of these units at any given time. Did the 32nd have three battalions or four? As for the 8th Bersaglieri, it seems to have started the campaign with two motorized and one motorcycle battalions and then moved to two motorized and one weapons battalion. Some sources have the regiment at 3 motorized infantry battalions, however.
For our purposes, the Ariete will have the following company-sized units:
2 HQ
1 FOA
9 M13/40 companies
3 L3/38 companies
2 AB41 recon troops
1 Motorcycle recon company
6 Infantry companies
2 Machinegun companies
1 Mortar company
4 47mm Anti-Tank Gun batteries
3 75mm Artillery batteries
2 Engineer companies
It will also have 2 German 88mm ATG/AAA batteries attached. I wish O8 would release the Italian 90mm AAA guns, but for now, these will do.
Basing is underway as I right this.
Posted by Thaddeus Gregory Blanchette at 11:18 AM 3 comments:

Planning this unit was fairly simple as there are excellent and acessable OoB sources for the 5th Panzer Regiment on-line. Again, I'm following my "universe slightlty to the left of us" philosophy and building an historic-ish 5th PzRgt rather than a perfect snapshot of the unit. The original mix of tanks is set for the Crusader-Gazala Battles period and includes 2 companies of Pz Mk II, 4 companies of Pz Mk III short 50s, 2 companies of PZ Mk IV short 75s, a Headquarters unit (on the circular base) and a composite recon company (on the house-shaped base).

O8 Pz IV shorts come with two different command tanks (both have the commander un-buttoned, one sitting and one standing in his turret) and they make nifty 1939-1942 command tanks. I added a MkII on the HQ's base as well. The recon unit gets one Pz Mk II and two motorcycle-sidecar combos.

The process for building this unit was much the same as that used for the British. First off, bases were spackled with Vallejo Sandy Paste, then the tanks were glued down and a base coat of Orange Ochre acrylic paint was applied. Once this was dry, Skin wash was applied over everything, followed by Sienna wash near the tanks. At this point, I was going for a light-colored tank on a dark-colored base. 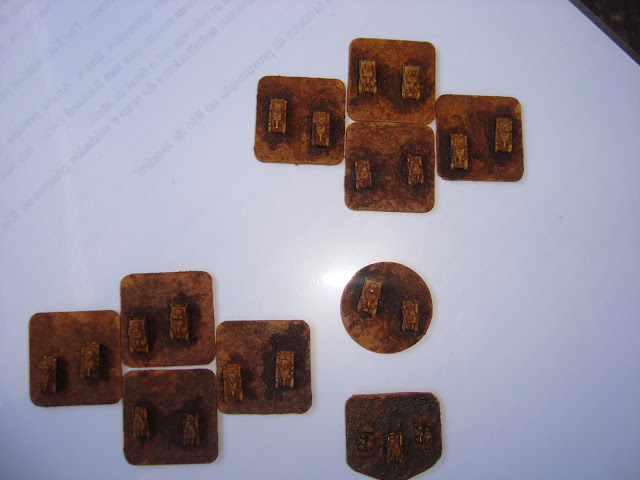 The tanks and bases were then drybrushed with Sand, Highlight Afrika Korps and finally Dark Flesh. Note the needle in the picture: it's there to pluck out bruch hairs which detach during drybrushing. At this scale, they are very noticeable. 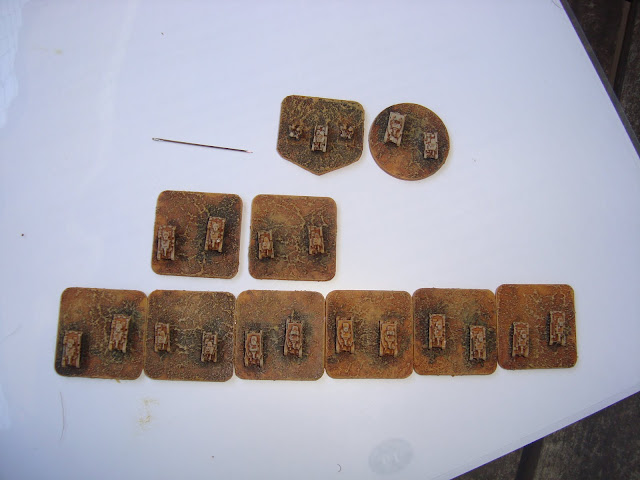 Finally, I pin-pointed highlights with Higlight Afrika Korps. The purpose of this is to smooth out the drybrushing and make the figure look less scratchy. You can see the effect in the above photo as the recon and command stands there have already been through the process while the combat companies haven't. Here's a picture of the whole regiment after the treatment was completed: 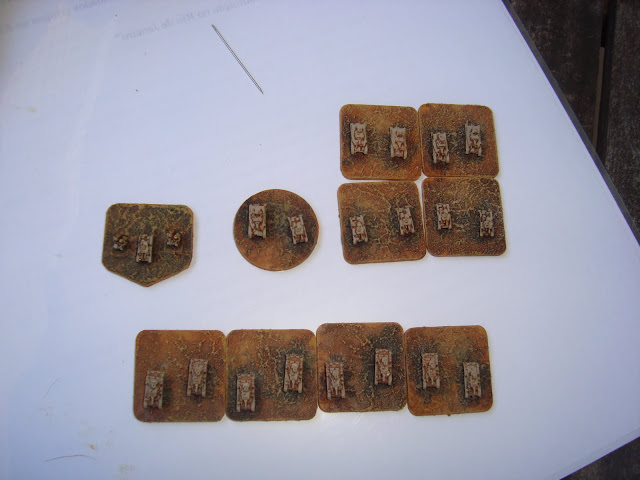 Now on to detailing. As was the case with the Brits, I'll paint black under gun barrels and sienna wash any bare or light spots on the treads. Tank commanders are painted black, highlighted grey and given a Dark Flech face. I then add in some red and white highlights here and there. Again, this scale is too small to see numbers and national markings. The bits of red and white, however, really make the models jump out and so are worth adding, even if they are too big for history. After detailing, I varnished the models with flat varnish. 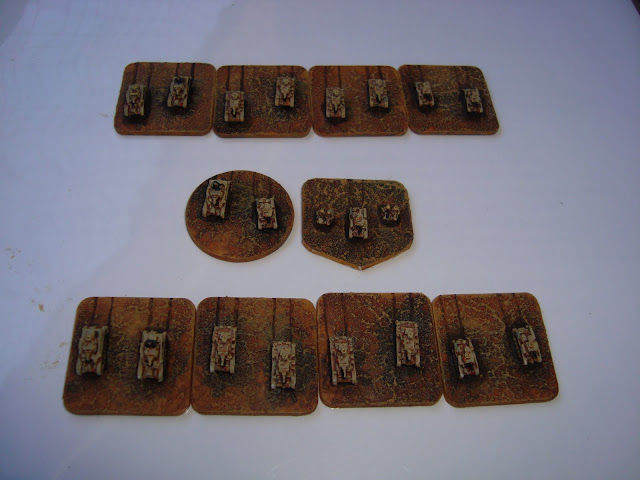 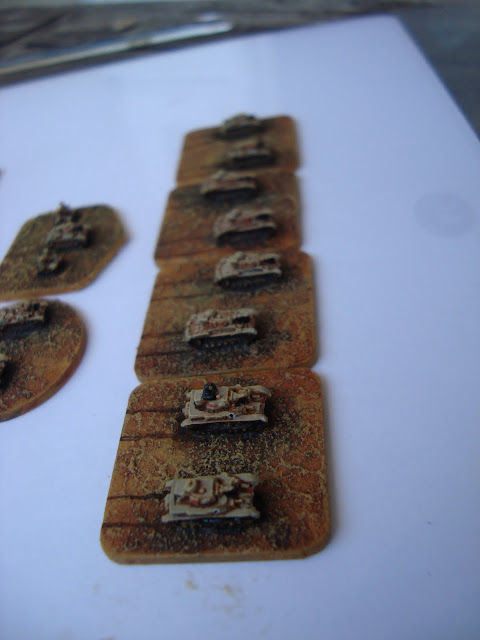 Base flocking turned out to be difficult for this unit. As I've mentioned before, my philosophy is to base darker or lighter than the model, in order to make the miniature stand out. As you can see, above, this didn't work well in this case.
What I finally decided to do was a three part flocking method.
About 70% of the base gets covered in fine yellow flock, with 20-25% (generally the areas closest to the tanks) covered in fine dark brown flock. Another 5-10% of the base is left unflocked. Finally, bits of green flock are added here and there. The result is as follows: 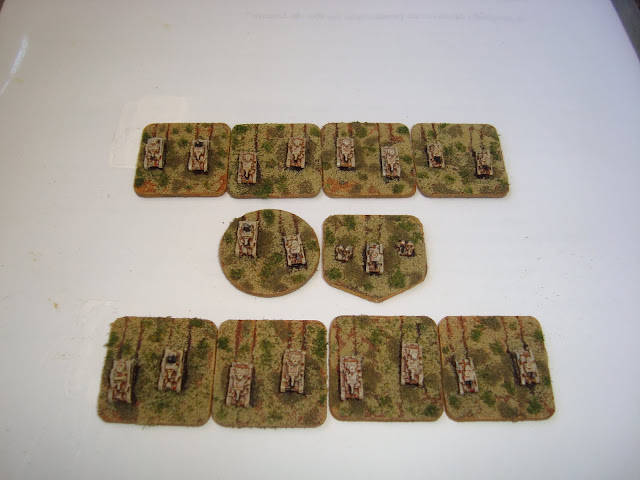 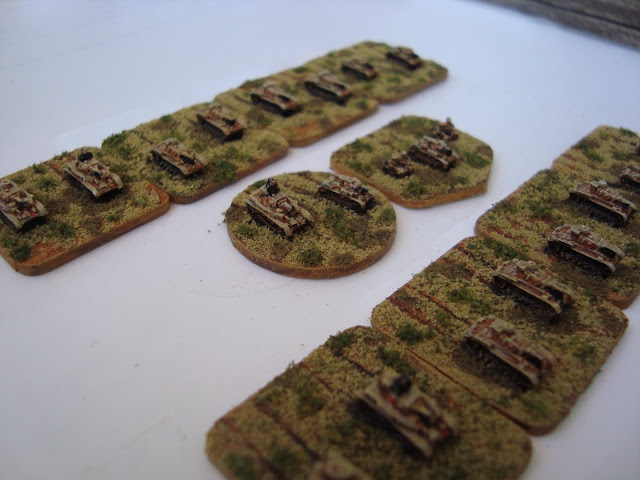 Posted by Thaddeus Gregory Blanchette at 9:07 AM 6 comments: