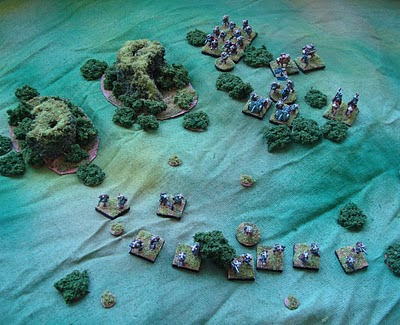 15mm Quar Arrive in Rio
On my recent trip to the U.S. top take part in the Stop Trafficking! conference at DePauw University in Indiana, I took the opportunity to pick up a bunch of 15mm Quar from Zombie Smith.

The quar are a delightful ficticious race which has sprung from the ferbile immagination of Joshua Qualtieri, who has apparently been dreaming up these little buggers ever since he was a kid. They are a race of extremely pugnacious anteater-like omnivores which Josh has imagined as caught up in a never-ending cycle of clan-based politics and warfare. At the current point of the story line (i.e. the point the miniatures are modeled on), the quar have a technological base that's roughly on the level of World War I and the current round of the endless conflict (appropriately called The Long War) has lasted 700 years. A new messianical leader has arisen among the quar of the nation-state of Tok, however. Alykinder is part Napoleon Bonaparte, part Leon Trotsky and part Moe from the Three Stooges. He has held out the hope, to all quar kind, that the Long War may finally be ended through a widespread and thorough-going revolution which will overthrow the ruling clanlords and usher in an era of unprecedented peace and prosperity across Alwyd, the quar's planet.

Fired by missionary zeal, Alykinder's Crusader catrawds (regiments) have overrun most of their enemies, partly due to the fact that their leader is something of a genius for military innovation (he pioneered the use of dirigible and zepplin-based airmobile tactics, for example). Alykinder's dream of peace through war seems to be going terribly astray, however. The intensified violence brought about by the Crusade has broken the bounds of the laws which the quar have traditionally used to keep total war at bay. Now, the four cadierquar of the appocalypse roam the face of Alwyd and Crusade seems posed to toss all of quarkind into an age of bloody chaos never before seen in their history...

The quar miniatures produced by Zombie Smith come in two sizes: 15mm and 28mm. Being that the quar themselves are somewhat shorter than humans, this means a "foot to headtop" size of 12mm and 22mm. My first batch of quar are four company-sized packs of 15mm figs for a total of about 200 miniatures. Josh very nicely supplied me with some extra mounted officer figs so that I could have a go at building a cavalry regiment as well. Josh claims that he plans to have the entire 28mm line of quar figs reproduced in 15mm "very soon now", but at this point, all you can buy are Crusader infantry. This is not such a problem as one might think, however, because many of the factions opposing Alykninder's forces use Crusade-style equipment. You can purchase 15mm quar with helmets, caps and bear heads, so I've made the helmeted quar my Crusader forces and the rest will be their Royalist foes.

Zombie Smith produces two sets of rules for use with the quar and both may be bought and downloaded on-line. This Quar's War is meant to be used with the 28mm or 15mm stuff for company-sized conflicts (40-50 figures per side). Meanwhile Songs of Our Ancestors is a skirmish set, geared towards battles with 6-12 figures a side. Both systems are excellent and are worth your money even if you plan to use your own rules as they come with background information about the quar and their world. TQW is especially good in this sense and many reviewers have compared the book to Osprey's historical volumes. Particularly poignant in TQW is the series of letters which open each chapter between a Crusader recruit and his young cousin back home. Understated and well-written, they give glimpse into the pathos and futilty of the Quar's conflict and warfare in general. For this reason alone, TQW get's a big thumbs up from us here at Lead Doesn't Bleed. Josh Qualtieri, like many wargamer's, seems to be something of a pacifist and is on-record as saying that one of the reasons he developed the quar is so that gamers could indulge in bloody mayhem without feeling guilty over representing real-life wars and battles. That may be so and is a laudible thing, but what's truly extraordinary is that Qualitieri and crew's fluff pieces can actually make you feel terribly sorry for these ridiculous little bloody-thirsty monomaniacs.

Regarding the quality of the figures, the 28mm line is excellent and on par with the best stuff Games Workshop or the Perry Twins make. It's also expen$ive at 4-6 USD a fig. The 15mm stuff is much more economical, but is sculpted by Qualtieiri himself and is not quite so breathtakingly detailed as the larger figures. However, it is very workman like and perfectly acceptable fort he wargames table.

Planning the units and basing
I plan to use my 15mm quar with Specialist Military Publishing's Future War Commander rules and also, possibly, with Rapid Fire. I've thus decided to base my figures at a scale of 20 quar to a casting. This means that a regulation sized catrawd of 9 line companies and 1 assault company will be made up of 20 stands of 2 castings each. I've decided to base light machineguns and light mortars seperately at a scale of six weapons to a stand. The average catrawd thus gets three stands of each. Technically, at the platoon/section level of play, these weapons would probably be factored in to the regular stands. However, being that this is WWI -style combat, with relatively few vehicles, I'd like to give players a wide range of infantry types to utilize during the game, so I've gone with seperate basing of company-level support weapons.

Each catrawd will also get a regimental command stand of 3 figures and a flag and 2-4 "battalion" commanders, mounted singly.

Zombie Smith makes heavy tanks for the 15mm line and I bought one. I also picked up some WWII German 150mm infantry guns from Pendraken's 10mm line. These are funky-looking castings which fit right in with quar's style. I figure that they are 75mm support guns. Finally, I did some simple conversions for the artilleryquar (basically cutting away their weapons) and assault engineers (engineers get a bit of small plastic tubing on their backs to carry their anti-obstacle and demoltion charges, while flamethrower quar have two bits of the same tubing attached to their packs as fuel tanks). I also converted some mounted officers into lancers by filing down their epaulettes and giving them plasticard carbines and paperclip lances. 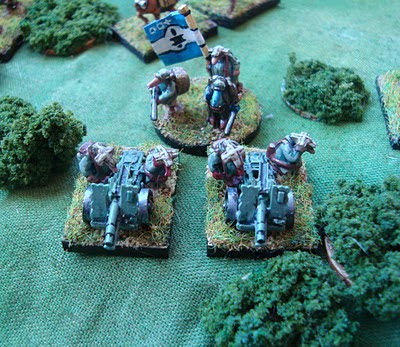 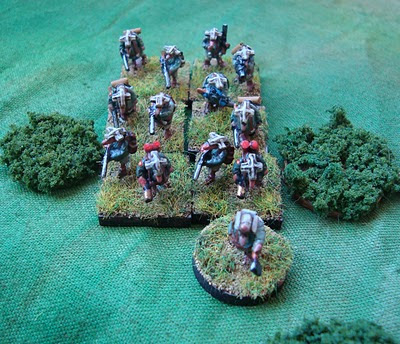 A column of assault engineers led by flamethrowers

My first unit will be a Crusader provisional brigade; a mish-mash of remnants of other units and, consequently, something of a combined arms force.

The simultaneous revolts in Lower Barro and Kryst of 1772 took the Crusader High Command by surprise, though by all rights they shouldn't have. Both nations had been relatively quickly overrun before the Crusade even properly began. Lower Barro had always been one of Alykinder's main bases of political support, but the False War had resulted in the wholesale exile of the nation's royalist political class, who maintained their connections with the region's principal clans from their refuges in Fidwog and Creevin. The conquest of Kryst, while rapid, had been less than complete, with significant elements of the Krystian regular forces (most particularly the famous Sand Stalker Brigade) undefeated. Furthermore, like the nobility of Lower Barro, Kryst's most notorious royalist leaders were exiled, not killed.

By late 1770, then, both regions were passing through a marked upswing in partisan activity, which was barely kept in check by Crusader internal security troops and the local police. As overstretched as Alykinder's forces were, few regular units could be dispatched for partisan-hunting operations in the deserts and mountains of what was still generally considered to be the Crusade's backyard.

In 1772, several city states in Kryst openly entered into revolt as well as the city state of Mulf in Lower Barro. Initially, rebel forces consisted of militia levies, backed up by partisans and a handful of elite city guard catrawds (most notoriously the Sand Stalkers, in the case of Kyrst). The rebels' immediate opponents were a grab-bag of Crusader units which generally fell into one of two categories: tired and depleted veteran units which were in the region resting and refitting prior to redeployment elsewhere, or newly raised, very green reserve Catrawds.

The 116th Provisional Brigade was organized around several Crusader units which were in the southern portion of Lower Barro when the revolt began. It is an excellent example of just the sort of ad-hoc battlegroup which bore the brunt of the initial rebel assault.

The core of the Brigade was made up of the remnants of the 116th Crusader Guards Catrawd under the leadership of Syrnol Cysrad, who was quickly breveted to Caernerol and brigade command at the start of the rebellion, leaving effective control of the 116th Guards to his second in command. Initially, the catrawd had only enough ryflers to make five understrength companies and only a third of its authorized support weapons (mortars and light machineguns) were available. Cysrad, however, quickly attached the faculty of the Welfyn Combet Engineer School to the unit, giving it an additional three companies of flamethrower and demolitions-equipped assault troops, two batteries of light infantry guns and four old, but serviceable, Baeliog heavy tractors.

The 35th Gendarmie was a cavalry unit on internal security duty which had been largely overrun by Lower Barro militia in the opening days of the revolt. The squadron's remnants fell back on Welfyn where they were re-equipped and re-organized by Cysrad as the Brigade's reconaissance unit. 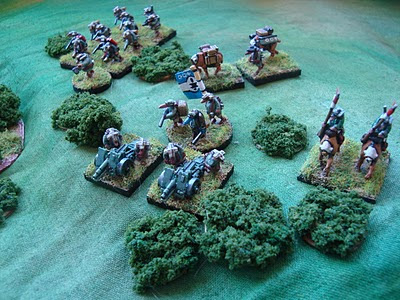 Sylwedl Yrseg plants the catrawd's flag behind the infantry gun battery.
To his left, two wedges from the 35th Gendarmie wait in reserve. 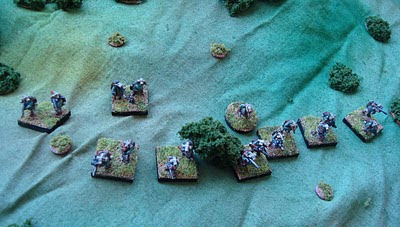 Three rhyfler companies from the 116th advance in skirmish formation through a small valley.
Light machineguns anchor the line's right flank and a light mortar battery has set up in reserve,
ready to offer fire support if necessary. 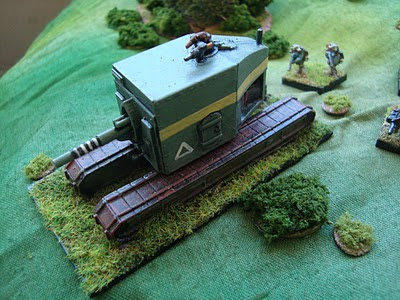 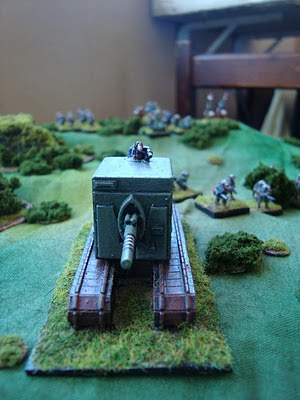 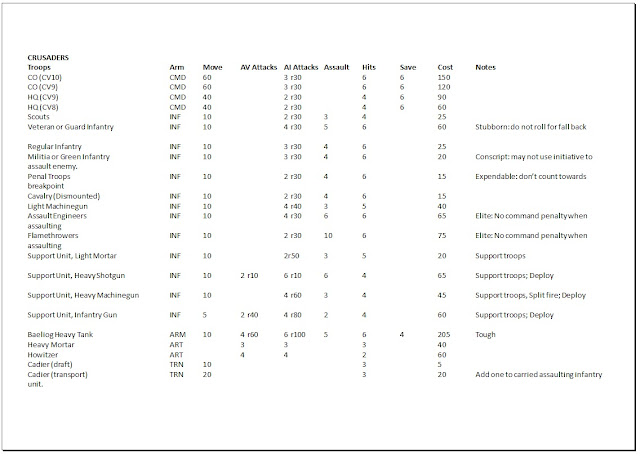 Posted by Thaddeus Gregory Blanchette at 11:44 AM