The Light Missile Tank was a stop-gap measure employed by the Paneuropeans during the battle for Spain. The Pansies discovered that their infantry needed heavy missile support just when the main factories at Stuttgart had just cycled away from the elderly Peltast Missile Tank towards the new Ajax design. 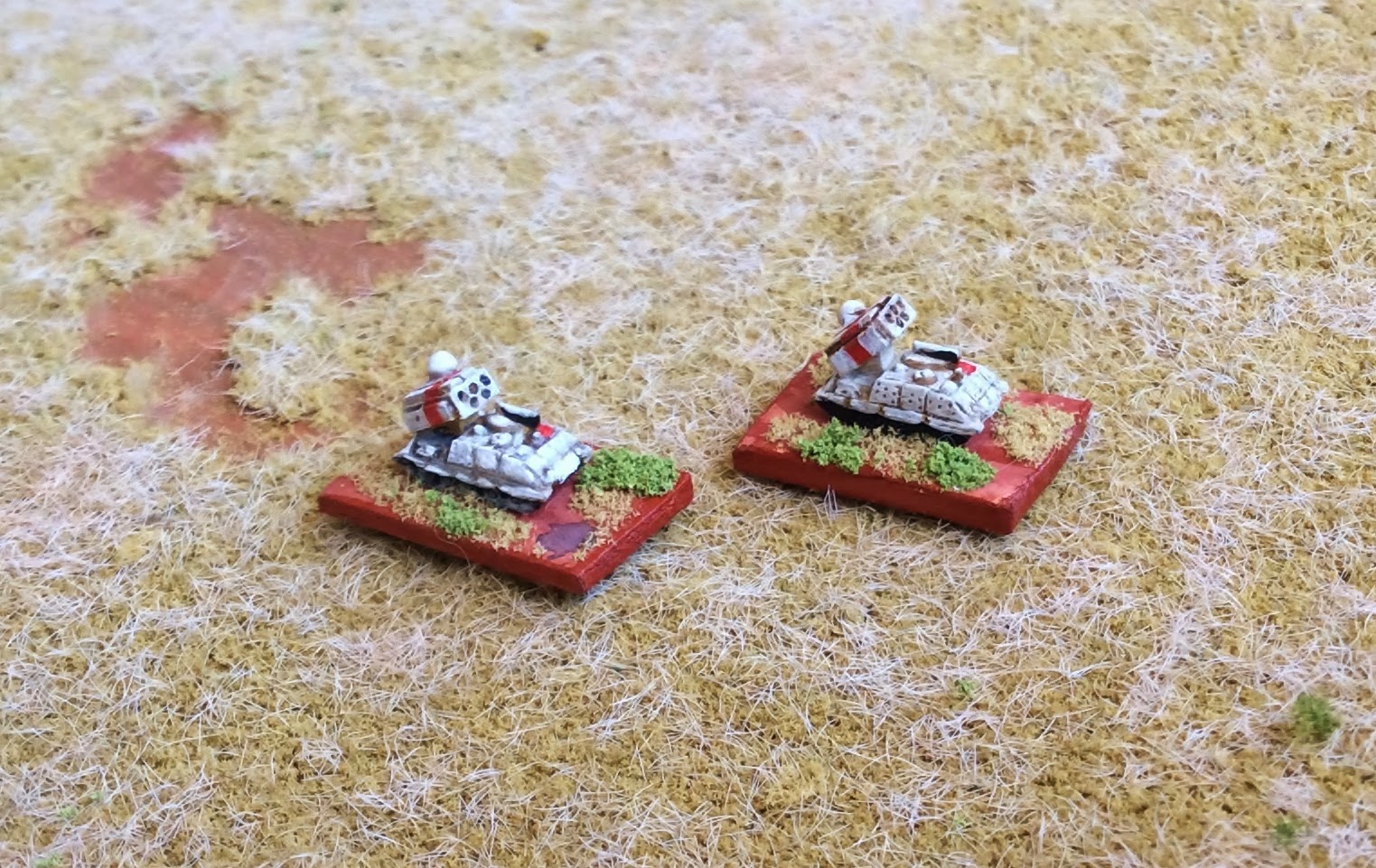 The Psiloi was cobbled together using any chassis available (mostly obsolete MBTs and APCs) and a "fire and forget" brilliant missile launcher. BPC applique was bolted on to the vehicle and a rudimentary close-defence system gave the LMSL slightly more protection than a cheap pair of  jammies. Equipped with heavy-duty off-the-shelf civilian grade fusion power packs, the Light Missile Tank also typically sported several charge ports, used to support power armor in the field.

The "Pissies" were extremely cheap to produce, and could be knocked together in a matter of hours using the most basic machine tools and fabricators.  Most M.I. battalions quickly produced their own variants from whatever material they had at hand. My particular battalion has a two-vehicle section attached, but most Paneuropean Mobile Infantry Regiments attempted to field at least one section per company.

The Light Missile Tank moves as a light tank, cannot transport any infantry and has A2, R4, D1 and M2. It's cobbled together nature, however, means that it is eliminated by both "D"  and "X" results, like an archaic armor unit. It costs half an armor unit or 3 points to field. However, given the quantity of self-aiming missiles it packs, it can choose to ripple fire its entire load. This allows it to make three 2/4 attacks in one turn. If it does this, however, the LMSL is eliminated after combat is resolved (the chassis simply can't handle the stress).

I have never been satisfied with the MSL, considering it to be the weakest of the conventional armor units in terms of its cost-effectiveness:  it comes out to 5.67 points using Henry Cobb's calculator, whereas a GEV is 6 and an HVY 6.17. The LMSL is 2.5 points, but it's one-shot multiple attack ability brings it up to a nice round 3.0 points. This is basically a disposable Heavy Weapons unit. It costs one-third the price of a regular HVY WPN, but has less firepower, significantly less mobility, practically no defense capacity (not to mention no infantry weapons). Use it and lose it. It gives infantry positions a very nice anti-GEV capability, however.

The second new unit is O8's Sarissa battle robot. This is quite out-of-canon for the Ogreverse, so I obviously won't be using it in anything like "purist" play. 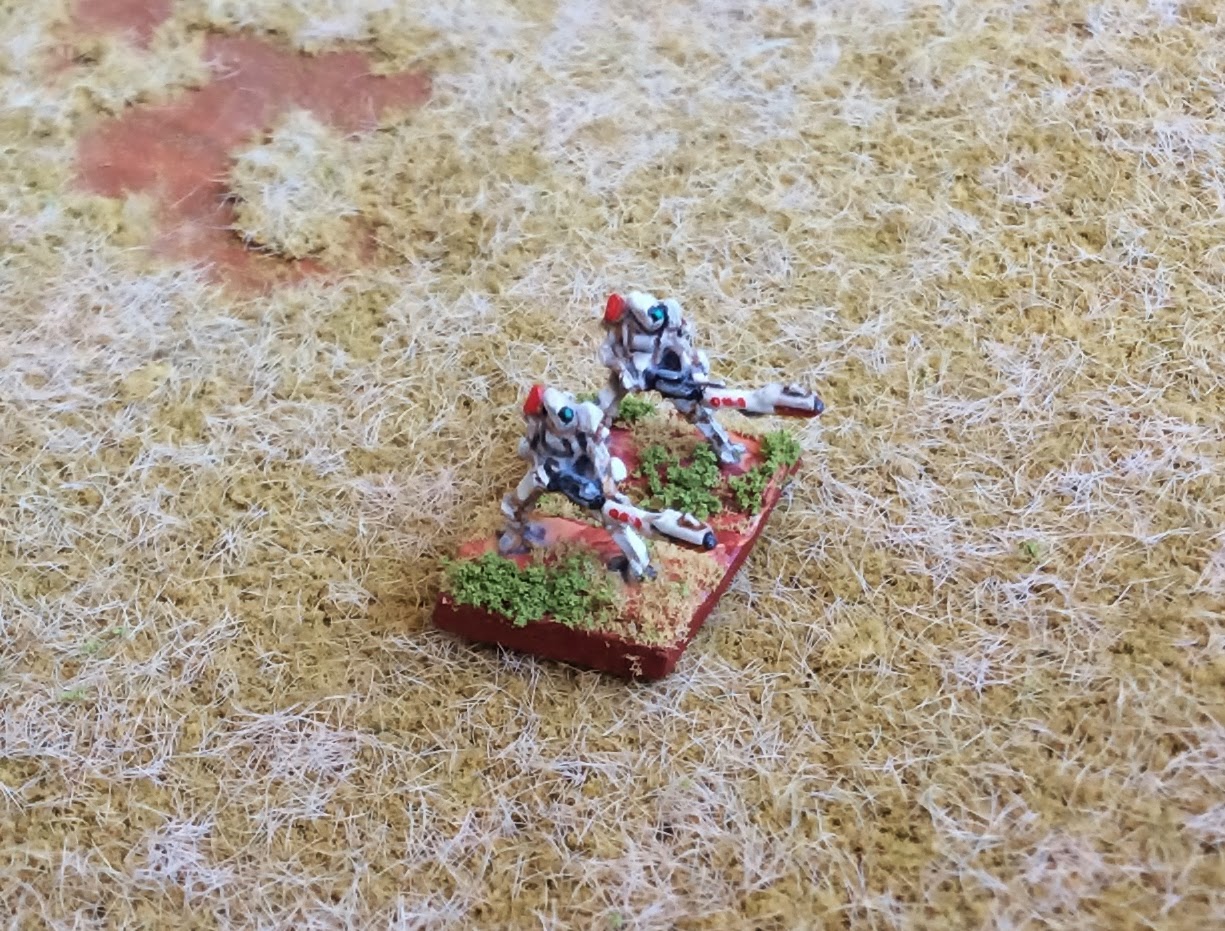 1) It can only combine in two point units (not three as normal).
2) It defends at x2 in urban terrain (unlike regular infantry, which get x3).

The Sarissa was built to give Mobile Infantry some dedicated recon and sniping capacity. It has A1, R3, D1, M3 per point, with two combining to give A2, R3, D2, M3. Like all infantry units, it's doubled in overrun and loses one point to "D" results. It costs 4 points or the equivalent of two infantry per unit.

Posted by Thaddeus Gregory Blanchette at 7:04 AM