DP9 has what they call "fleet scale" gear models. These are roughly 6mm scale (normal Heavy Gear being 12mm, IIRC). I use their gears as 1/600 scale meka and their landships as massive, grav-powered transports-cum-firebases.

I then buy Oddzial Osmy (08) 1/600 scale ultra-modern tanks and infantry to support them. After all, most of the 6mm sci-fi stuff out there pretty much looks like ultra-modern, anyhow, right? I also use some of Germy Bugger's 2mm stuff, sold through Ground Zero Games.

The only models "missing" are power armor infantry and hover tanks. The second problem I've solved by building some of my own out of plasticard (they can be seen on the 2mm yahoo group site, along with a tutorial and plans to build your own - this is a PDF and you'll have to be a member of the 3mm Yahoo Group to access it). They are a bit fiddly, but quite do-able.

For power armor, I've decided to use Scotia miniatures 6mm power armor troops. They're a bit bigger than I'd like: about 4 meters tall in-scale. Still, for "gear" style power infantry they work fine.

I'm building mixed regiments of meka and power armor for two factions, with about 20 meka and 20 power armor stands per regiment. These are backed up by conventional armor, infantry and IFVs. For air support, I use Aerotech fleet scale models provided by Iron Wind. I also have a mercenary regiment being built up with Iron Wind power armor infantry serving as mechas. Looks very nice!

So you see, 3mm sci-fi is very doable, at least of the Japanese animé-style variety.

I also play Steve Jackson's Ogre in this scale which is simplicity itself. American modern MRLs become missile tanks, my home-made hover tanks are GEVs, Abrams become heavy tanks and for infantry and howitzers, I use Germy's stuff.

My Ogres are kitbashes made out of 1/300 scale WWII German Mausses (Meeses? Only if they're American, I guess...): 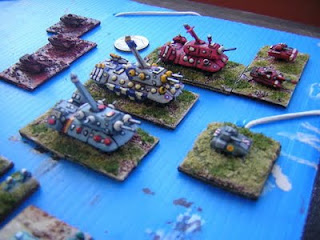 (Going left to right, that's a MkIIIb, a MKV and a MKIII. In front and to the right of the MKIII, you can see one of my homemade hovertanks).

Half the fun playing at this scale is scrounging for useable figs from all the 1/300 sci-fi lines out there. There`s actually a bunch of stuff you can use if you look for it.

And did I mention the one main benefit of this scale? It is CHEAP. 15 O8 Abrams tanks will cost you USD 3.50. That`s cheap enough for me to order them here in Brazil, shipping and all. For around thirty dollars, you can field a very nice army.

The new 3mm stuff out there these days is quite recognizable and easily on a par with most 6mm manufactures in terms of detail. O8 isn`t as detailed as GHQ, but it beats Brigade hands down, IMHO.

There`re two ways of basing 3mm, each with its benefits. One can either keep larger bases and put 2-3 models on each, giving one a more convincing mass game (a platoon stand based to this standard really gives the impression of being a platoon), or one can cut base sizes by half and effectively quadruple one`s playing space.

I use the first method for WWII games, but the second for FWC. It allows me to play convention-sized games on the 3x2 foot coffee table in my living room. This is a definite boon for those of you out there who are urban apartment dwellers like myself.

I`d be interested in hearing comments from anyone else who`s attempting to play FWC in 3mm. 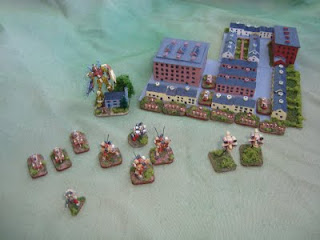 An ASS/HLS battlegroup containing tanks, infantry, mecha and a massive walker poses in front of a city block module made out of wood blocks and Monopoly buildings.

Posted by Thaddeus Gregory Blanchette at 5:22 AM