This was my first time playing Future War Commander and, unfortunately, the battle report is only partial as I lost some of my archives in our recent move. Basically, this was the first battle in an on-going campaign between the forces of the Red Baron Sacha Möder-Fokker and the Arcadian Socialist Syndicates  / Human Liberation Soviet (otherwise known as the ASS/HLS)

In any case, it shows about half of the game which was played out with 3mm (1:600) scale sci-fi figures from various manufacturers. 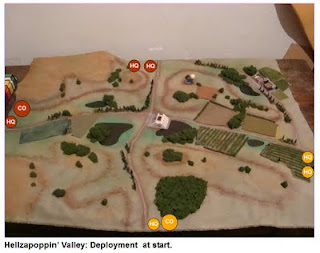 
The Arcadians win both the initiative and the air superiority roll. They also achieve notably good luck on their deployment rolls. The mech regiment’s light squadron manages four successful command rolls and moves onto the board from the south edge in double time. Half of the light mechs occupy the agricultural station in the center of the board and take up covering positions around the crossroads, while the other half of the squadron, including the regiment’s recon element, occupies the ridgeline to the southwest. With the light squadron covering their advance, the heavy squadron follows up. Meanwhile, the Arcadians' massive walker moves to the highest point of the southeast ridge and takes refuge in the woods there, overlooking the battlefield. Finally, the Arcadian armored battalion pours in down the valley road from the east, led by their light dragoon squadron. The heavy dragoon squadron, backed by two tank troops peels off north and heads for the village in the NE quadrant of the board.

The Baron’s forces, by contrast, get off to a slow start. None of the armored regiment’s vehicles make it onto the map while the mech regiment only gets one successful command roll. They deploy from the west end of the valley, line companies leading and support company following. The light company scouts to the north of the road. Their massive walker manages to deploy onto the plateau overlooking the valley, but blows its subsequent command roll.

No firing occurs on turn one. 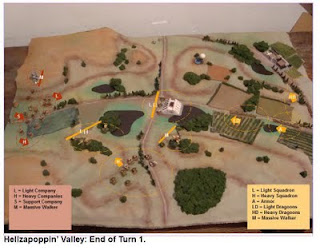 The Arcadians’ lucky streak soon comes to an end, however. Turn two begins ominously, with the recon units missing a communications roll to call in air and artillery support on the massed mechs in the valley below. A command bonus allows the heavy dragoon squadron to occupy the northeastern village and dismount its troops, however, while the unit’s attached armored support takes up a camouflaged covering position along the wooded ridgeline to the south. This effectively blocks the road to the eastern exit area, as well as securing the village, gaining two quick victory points for the ASS/HLS. Meanwhile, the light dragoon squadron enters the experimental station’s grounds and unloads its infantry while the rest of the battalion’s armor continues on up the road towards the complex. Unfortunately, in the south both the mech regiment’s HQ and the Arcadian CO blow their command rolls, leaving everyone high and dry. This is particularly devastating for the massive walker, which was counting on getting in the first strike against its counterpart on the other side of the valley.

By contrast, the Baron’s luck is as good as the Arcadians is bad. The Mech regiment wins TWO back-to-back command bonuses. They charge up the southwest ridge and unload a storm of poorly aimed autocannon fire into the Arcadian light mechs along the ridgeline. Quantity makes up for quality, however, and both the Arcadian recon troop and a light mech troop disintegrate in the hail of shells. The massive walker fires at its Arcadian counterpart and manages to knock its shields down by 50%¨. Meanwhile, the Baron’s tardy armored regiment finally puts in an appearance and comes barreling down through the northern pass in full combat order. 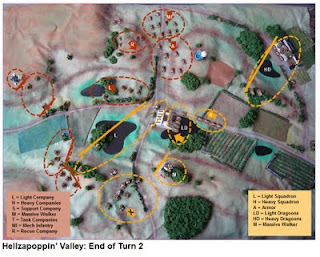 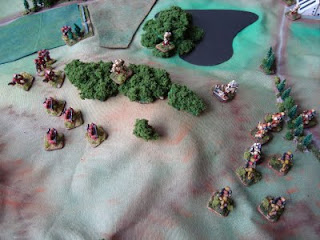 The Baron’s Guards storm the ridge while the Arcadian
heavy squadron is paralyzed by command indecision. 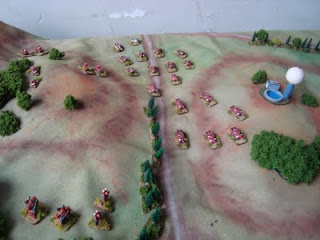 The Baron’s militia armor regiment finally make it onto the board
and deploy down the northern valley. Meanwhile, the mech
regiment’s light company scouts out the crossroads.
Turn Three


The Arcadian armor battalion moves into position to ambush the stike coming through the pass. Meanwhile, the light squadron mechs in the agricultural station open up on the Baron’s lead tanks. Disaster strikes once again, however, as the mech regiment commander misses his second consecutive command roll, leaving the light squadron without orders. The CO steps in and calls down a heavy artillery strike on the north pass. This destroys three tank platoons and disrupts another, together with the armored battalion’s commander.

The CO then orders the heavy squadron over the ridge in a charge on the Baron’s Guards. They are met by massed autcannon fire and half of them are disrupted. Luckily (!) however, the Arcadian CO bumbles his last roll and the command blunder table orders a retreat towards the board edge, which puts the heavy squadron behind the ridgeline once again. Unfortunately, the blunder also pulls the light squadron’s surviving mechs out of the woodsline, but still, I’d have to say the blunder worked in the Arcadians’ favor!

Luck does not smile on the Baronial forces, either. In the north valley, the only operative HQ manages to make one command roll, moving the recon company and part of the tank battalion into the treeline across from the ag station. The mech regiment commander misses his command roll and the CO directs an artillery strike onto the Arcadian’s massive walker, followed by two volleys from the support company and the Baronial massive walker. All this massive concentration of fire (40 smart missiles) manages to do is knock down the enemy walker’s shields and disrupt it, however.

Needless to say, there is very little movement this turn.

That's it for now! I promise the next report will be better.
Posted by Thaddeus Gregory Blanchette at 7:10 PM