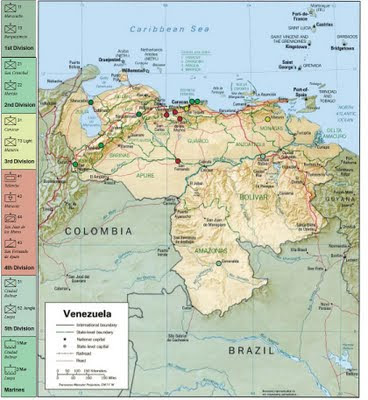 OK, here is a somewhat better Venezuelan OoB, as of 2008, provided through some stellar research my Mark Bevis. Rather than repost what he’s already turned up (and posted on the Yahoo TO&E Group), I’m going to attempt to synthesize the data at hand into a more consumable form. (Most of this information seems to come from the 2005 Military Balance, and “Venezuelan Armed Forces 1990-2000” by Jose-Mari Serrano. I’ve also added in data drawn from the SIPRI’s arms trade database).

Venezuela’s land forces total some 65,000 troops, 31,000 of which are National Guard and another 27,000 of which are 30-month conscripts. This gives the nation’s ground forces a professional military cadre of only some 7,000 soldiers, the majority of which, we may presume, are officers and/or technicians. The Army also has some 8000 reserves. 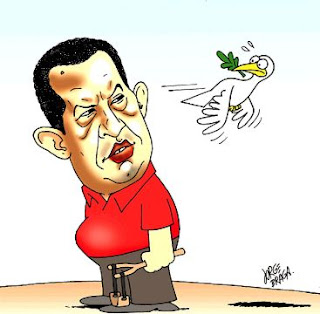 ARMY
In terms of major ground units, Venezuela has 5 divisional headquarters – 4 infantry and 1 armored. There are 12 brigade-sized combat formations:

These are further broken down into:

The Army’s reserves, consist of:

MARINES
Marine ground forces include some 7,800 soldiers. Only 4000 of the Venezuelan Navy’s 18,300 effectives are conscripts, so we may assume that the Marines have a slightly higher level of elán and professionalism than the Army.

The Marines have a Divisional Headquarters which has 2 Marine Brigades These, in turn, contain:

NATIONAL GUARD
This is primarily a paramilitary security and internal defense force, though there are some indications that Chávez wants to turn it into a Cuban-style people’s militia, armed with light anti-tank weapons, mortars and machineguns. Its 31,000 soldiers are divided into 9 Regional Commands, 3 Border Detachments and a Rural Commando Detachment.

MAJOR ARMY FIELD UNITS, ORDER OF BATTLE
Note that I’ve removed most “non-teeth” units from this list. Each brigade, for example, generally has a headquarters company and a logistics battalion and several other small units – electronic warfare companies, signal companies – are sprinkled about the army. As these units are generally only abstractly represented on the miniatures battlefield, I have not included them here. Units are grouped by division and brigade, with the home station of these larger units listed in parenthesis. Where possible. I’ve indicated what weapons units are armed with.

* Note: Most sources say that Venezuela has 25 AMX 13VTT APCs. However, the country received 66 from France back in 1972, along with 6 mortar carriers on the same hull. Perhaps only 25 are left in running condition, but Venezuela seems to have maintained its other French equipment intact during this period, so feel free to give the mech battalion a full complement of APCs.

*Note: Venezuela ordered 30 EE-11 Urutus from Brazil in 1984, though most sources say that they have 35. 25 of these are with the Marines. Given that the 5102 Squadron is attached to a Jungle Infantry Division and given that the EE-11 was precisely built for jungle recon, my guess is that if the other 5-10 Urutu’s exist outside of the Marines, they’re with the 5102.

Note that the 816 Air Reconnaissance Group, apparently a special forces unit based in Caracas, is also part of the Reserves. 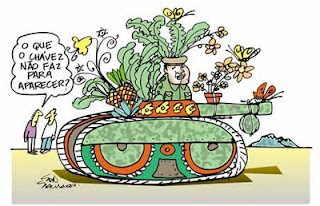 "To what lengths will Chávez go to get his name in the news?"

BATTALION AND COMPANY LEVEL TO&ES
Here’s my best shot at sussing out the Venezuelan’s battalion and company-level OoBs. This is mostly based on old data from the ‘90s, guesswork, extrapolations off of other South American militaries and clues gleaned from the SIRPI database.

Notes: Mark scared this one up. I’m not sure from which source. It shows that Venezuela, like most South American militaries, seems to have used the U.S. army of the 1950s and ‘60s as a template. It’s anyone’s guess what the Reconnaissance Platoon is armed with. It’s probably a safe bet that at least all of the 11 regular infantry battalions are provided with truck transport or could commandeer it in relatively short order. My guess is that the Cazador, Marine, Airborne and Jungle Battalions follow this same general pattern, though with less motorization, foot-mobile recon units and perhaps no AT platoons (at least in the Jungle Battalions). Company-level TO&E is just a guess. I would presume that the weapons platoon has the usual machineguns and light mortars and it’s a pretty good bet that the infantry in general will be armed with RPGs.

Thad notes: Venezuela also has some 30 old M-8 scout cars as well, according to some sources. If these are still operational, they cound very well be in the Infantry Battalion Reconaissance Platoons as 2-3 per platoon, plus jeeps. This is another plausible fielding option.

Notes: This is just a guess. The Venezuelan armored units all have 40-41 tanks, so I presume that they either have this structure or four companies of ten tanks each. I’m leaning towards the above structure due to circumstantial evidence. In the first place, both the French and the Americans, whose equipment the Venezuelans use or whose TO&E templates they’ve copied, use larger platoons. Furthermore, even if the Venezuelans use a ten company tank structure, maintenance issues, especially with older weapons, would reduce the number of vehicles they could effectively field. I thus feel better with 9 maneuver unit battalion than with a 12 maneuver unit battalion.

Mark Bevis says: At 41 tanks to a battalion it would be Bttn HQ of 2 tanks and 3 Companies each of 13 tanks. Now the French use 4 platoons of 3 tanks as much as 4 tank-platoons, and my gut instinct is to go with that, but 3 platoons of 4 tanks is equally plausible for the reason you state. The two tank Battalions also have 2x AMX-30 ARV each. (Thad sez: I kept non-tooth units out of the listings for the most part).

Notes: This is also a guess, though SIPRI registers that the Venezuelans did buy enough AMX13 APCs to outfit the whole battalion and a battery of self-propelled mortars.

Notes: Venezuelans batteries seem to have six guns and a distinction is made between artillery groups and battalions. It’s my guess that groups have two batteries while battalions have 3 or 4.

Notes: There are two of these and there may be an additional independent squadron as well, all equipped with Dragoon 300s.Venezuela apparently has 11 Dragoon C3 vehicles, 25 Dragoon APCs, 42 Dragoon 90mm, and 21 Dragoon mortar carriers. Extrapolating off of the Brazilian Cavalry Squadron, we can presume that each troop has 1 APC, 2 Dragoon 90s and a mortar carrier. This would work out, roughly, to the TO&E above,

Notes: Venezuela has 3 motorized cavalry groups and 2 independent squadrons. One or more of the independents may be armed with amphibious Brazilian EE-11s. The rest have a total of 100 V-100 and 30 V-150 armored cars divided between them. It may be that the V-150s are in fact mortar carriers, which would jibe with the general armored cavalry pattern in many South American countries. Thus the TO&E above.

UPGRADING VENEZUELA’S ARMY
As we’ve mentioned in previous articles, Hugo feels threatened and has recently gone on a weapons shopping spree. So far, this has netted him some nice SU30 Flankers and a bunch of Russian helicopters, as well as a load of new small arms and munitions. Hugo’s attempt to purchase 24 new Tucano ground attack aircraft from Brazil was blocked by the U.S., however, and there still seems to be some doubt as to whether the 90 T-72s and the BM-30 MRLs he ordered from Russia have been delivered or if he will ever receive the 135 BMP-3s he wants.

If you want to play with an up-graded Venezuelan military, though, here’s my best guess as to how this new equipment will be integrated into the Army.

The 90 T-72s will replace the elderly AMX-30s in the 412th and 413th Armored Battalions. The 414th will probably continue to use its newer AMX-13 90s, however. At least some of the surplus AMX-30s will go to Ecuador, but it’s possible that Venezuela could keep some or all of them for its reserve armored battalion.

The new MRLS will probably replace the LARS, though they may be made into an entirely new artillery group. In any case, they will probably be attached to the 4th Armored Division in any future conflict.

The 411th Mechanized Battalion will obviously receive some of the BMP3s, but there will be enough left over to arm one and possibly two other battalions. Rather than re-equip two existing battalions, it’s my guess Hugo will go for raising two new battalions, seeing as how he’s claimed several times that he wants to expand the size of the army. If this occurs, the 43rd and 44th brigades will probably be re-designated as part of a new 6th division – possibly a Light Armored or Cavalry Division. Alternatively, the 4th Armored Division could be continue as a four brigade unit, perhaps with 3 brigades each having a mechanized and armored battalion as well as a motorized cavalry group. Meanwhile, the fourth brigade would hold the 2 Airborne and Light Armor battalions. This option would allow the Venezuelan Army to use the 4th Armored Division as a sort of shock corps. In any case, we can presume that the 4th will be the spearhead of any invasion of Colombia.
Posted by Thaddeus Gregory Blanchette at 7:06 PM