The Venezuelan Military: How Do We Paint Our Toys?

Here are some images of Venezuelan military vehicles to use as a guide for painting. The Venezuelan Army seems to use a dark olive green and tan camouflage scheme for its military vehicles and a three tone green/olive drab scheme for its helicopters and airplanes. However, as you'll see below, there's some evidence that the three-tone camouflage scheme is being generalized throughout the military. 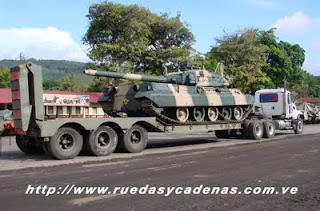 Here's an AMX30V on its transporter, which seems to be a simple commercial 18-wheeler tractor-trailer which has been adapted for the job. Note the national colors on the lower bow. The second picture shows an AMX30V in the field. Note that they don't seem to be equipped with any night-vision aids except for a searchlight. 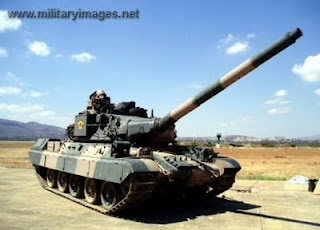 Below, you'll find a photo of a Venezuelan Army M-18 Hellcat, dating from 1987 and it's anyone's guess whether or not these vehicles are still in service today. It certainly looks good for a 40+ year-old AFV, though, and one would presume that the mechanical elements of these beasties are simple enough that they could be kept in service as long as one wanted them. Fast, light, hard-hitting and easy to maintain, it would seem to me that the M-18 Jackson would still be an effective combat vehicle for South American today. 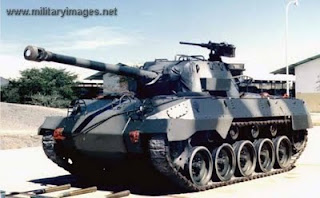 A Venezuelan Cadillac Gage. I've also found photos of these done up in a dark blue color and it would seem to me that at least some of them are used by internal security forces and/or military police (in South America, they are often one and the same thing 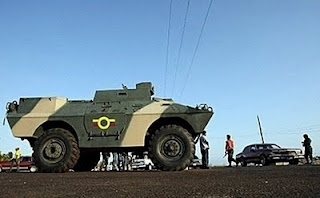 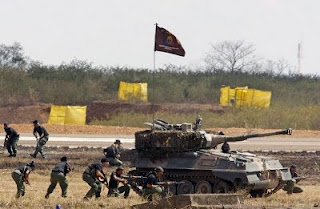 This is a photo of a Scorpion 90 on excercizes. Note that they obviously train to support infantry and this, in turn, indicates that these tanks are part of Venezuela's light armored brigade.  Obviously, this is the Scorpion which has been upgunned with the 90mm Cockerill. Below is a better picture of the Scorpion 90. Note that this vehicle seems to be using the same tri-color camouflage scheme used by the Venezuelan airforce. 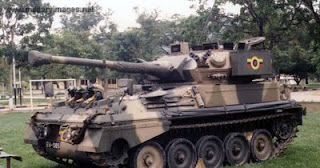 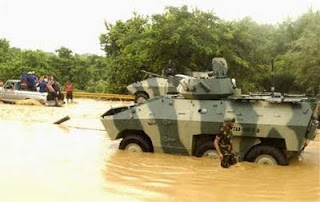 A Brazilian-made EE11 Urutu of the Venezuelan Army, doing what it does best (i.e. mucking about in marshy terrain). The Urutu is a cheap and effective APC, on par with the Soviet BTR70. It is easy to maintain and operate and is amphibious, having been uniquely designed for combat in tropical third world environments. Sadly, its armored protection is on par with a cheap pair of kiddie jammies. 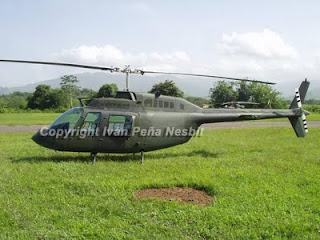 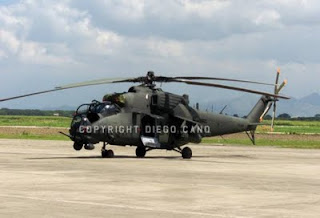 One of 10 Mi35 Caribe attack helicopters which Venezuela has recently purchased from Russia. Apparently, the guns on this one aren't standard Russian fair, so these may have been upgraded. 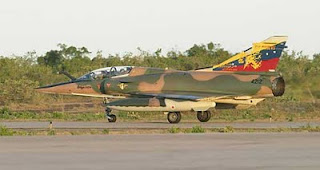 A Venezuelan F-16 rolls down the runway. One presumes that the beautiful tailflash would be painted over in the event of a war, but hey, you can paint your miniatures any way you like. Including the tail flash will certainly make them distinctive. Only about 8 to a dozen of these planes are still operational. 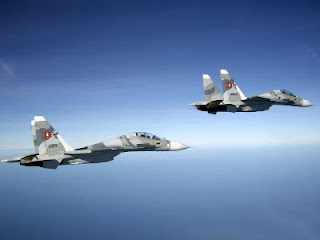 And finally, here we have a pair of the new Russian SU30 Flankers which Hugo Chávez has bought to equip the two squadrons of Venezuela's Air Group 13 (Escuadrón 131 and Escuadrón 132). These seem to have maintained the original Russian paint scheme. The Venezuelan Air Force is considering purchasing a further 24 SU30s, which would bring their total up to 48. Below is a nice shot of the Venezuelan SU30 showing the tail flash. 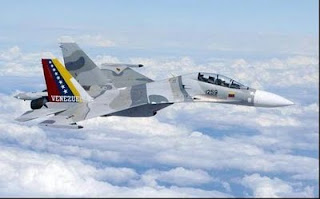 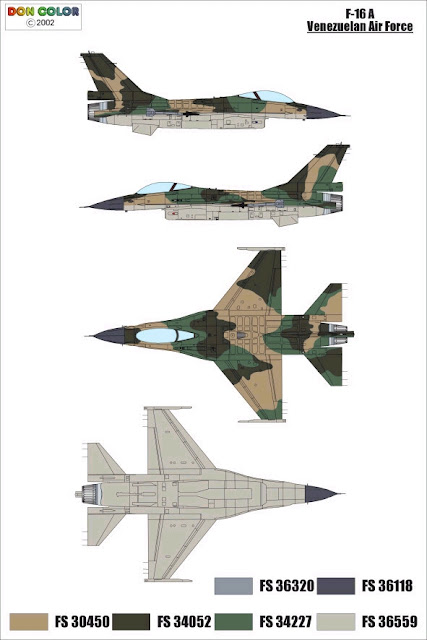 Here's a clear image of the usual tri-color paint scheme of the Venezuelan armed forces. Again, note that the SU30s appear done up in regular Russian paintwork. This may have changed by now.

"Feed me, Hugo!": the elite 42nd Parachute Brigade, of which Hugo Chávez is a veteran. By the way, the Venezuelan Army's "official" nickname is The Forger of Liberties. Obviously, they mean "forge" as in "create". Still, good for some low yucks, wat, wat?

Posted by Thaddeus Gregory Blanchette at 4:59 AM